China is preparing to vote on a new national security law it hopes will quell the protests in Hong Kong, sending a message to a U.S.-backed Taiwan. Meanwhile, economic and political tensions between the two powers are intensifying amidst the backdrop of the coronavirus crisis. 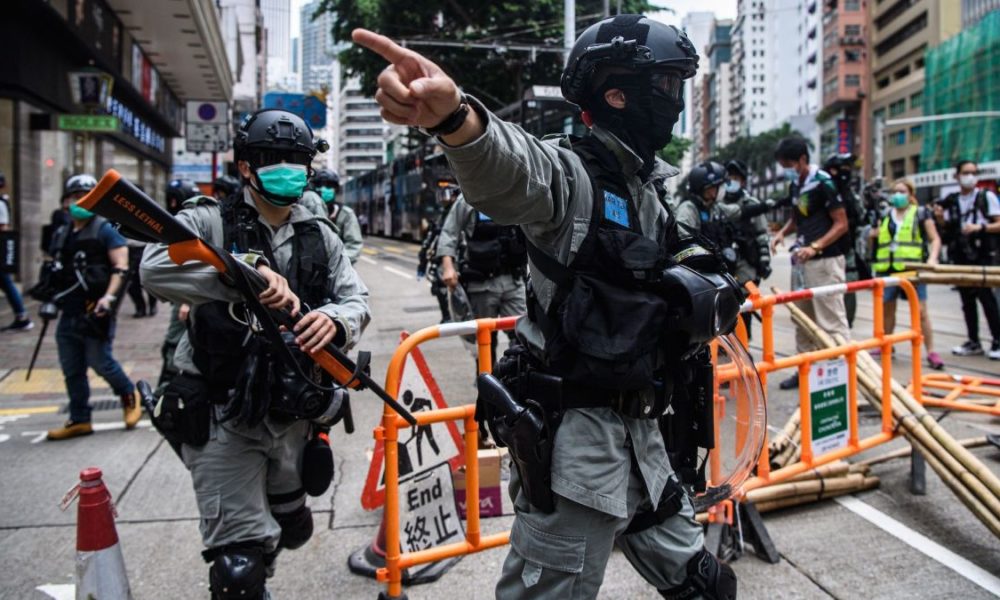 Protests return to the streets of Hong Kong over China’s attempt to pass a national security law.

While much of humanity continues to debate coming out of lockdown and the ominous prospects of the economic, social, and political crisis the coronavirus is leaving in its wake, mobilizations and repression has returned to the streets of Hong Kong. Thousands of demonstrators defied the bans imposed since the beginning of the pandemic and came out to protest against the new national security law China — with the complicity of the unpopular Carrie Lam government — will attempt to “restore order” and liquidate the movement that since last year has been confronting the Chinese regime’s offensive against democratic freedoms, autonomy, and growing inequality in one of capitalism’s main centers.

This new legislation will give the Chinese Communist Party and its Hong Kong counterpart free rein to accuse any political opponent of “terrorism,” “separatism,” or of being an “agent of foreign interference.”

On the domestic front, it is clear that the Xi Jinping government is seeking with this measure to send a disciplinary message not only to activists in Hong Kong but above all to the workers in mainland China, where the likelihood of social conflict and political crisis are growing in the shadow of the coronavirus and unemployment. In short, it seeks to strengthen the regime’s Bonapartist features and in the process renew its social base by appealing to the most reactionary nationalism.

The other dimension of this government measure is geopolitical, and it cannot be understood separately from the intensifying dispute with the United States. China is making clear some “red lines”: the offensive against Hong Kong’s semi-autonomy guaranteed by the 1997 agreement between China and Great Britain is a warning shot to Taiwan — which China claims as its territory — and a warning to the leaders of Western powers, particularly Donald Trump, who has threatened to recognize Taiwan as an independent country.

The bill is one of the most important votes to be taken in the Chinese National People’s Congress, which is taking place this week. This pseudo-parliament, composed of 3,000 delegates from the Chinese Communist Party (CCP) including businesspeople and other members of the ruling bureaucracy, reflects the political elite. Its function is to validate the Bonapartist dictatorship of the executive. Its value lies in providing a stage for the symbolic display of Xi Jinping’s power before the domestic audience — beginning with the CCP itself — and before the competitors, allies, client states, and commercial partners of what is the world’s second-largest economic power and main rival of the United States.

This session has aroused particular interest because it is the first public presentation of state policy to address the ravages of the coronavirus, including a 6.8 percent decrease in GDP in the first quarter of the year (the first contraction in four decades) and a rise in unemployment that approaches 6 percent, according to official figures. The governing bureaucracy’s objectives, spelled out in the Prime Minister’s opening speech, have been adjusted to the times: they were centered on unemployment; for the first time since 1990, there were no annual growth targets given for GDP; and there was no mention of the elimination of poverty, a goal that had been set in 2010 and that was supposed to be achieved this year. These numbers place limits on the Chinese bureaucracy’s triumphalism over its relative (and questionable) success in controlling the spread of the coronavirus.

But China’s rivals are not much better off.

The health and economic impact of the Covid-19 on the United States, aggravated by Trump’s unilateral policy of denialism, has further deteriorated U.S. world leadership. This vacuum of hegemony is giving China an opportunity to present itself as a replacement, playing up its “soft power” — which includes generous donations to the World Health Organization, sending supplies to help Western countries such as Italy devastated by the pandemic, and at the same time driving a wedge into the European Union.

For strategic, political, and electoral reasons, Trump is on a brutal anti-Chinese crusade, in keeping with his “America First” campaign slogan.

The trade war, which had come to a halt in January, has returned with a vengeance, with telecom equipment maker Huawei at the center of the dispute. Washington seeks to strike the final blow, which could have consequences for the technology industry were China to retaliate against U.S. firms with important investments in its territory, such as Apple.

Secretary of State Mike Pompeo was charged with spreading the theory that the virus — which Trump continues to call the “Chinese virus” — was created in a laboratory in Wuhan and from there spread by accident (or even deliberately). Of course, there is no more evidence for this “fable” than there was for Colin Powell’s lie about WMDs to justify the war and occupation of Iraq when he was secretary of state in the George W. Bush administration.

The U.S. president accuses the Xi government of being responsible for the coronavirus pandemic and therefore for the worldwide economic depression caused by the lockdown. Trump’s interest is twofold. In foreign policy, he seeks allies to condemn China and make it pay an economic and political cost. So far, he has partially brought Australia and Japan, the traditional U.S. allies in the region, on board with this line. Domestically, under the pressure of the election campaign, he seeks to blame China for the (as of this writing) roughly 100,000 deaths and 40 million people infected in the United States. Trump is competing with Joe Biden over which of them can be the most anti-Chinese.

This renewed hostility led Chinese Foreign Minister Wang Yi to denounce the United States for pushing the two countries to the brink of a new Cold War.

As tempting an analogy that may be, it is rather imprecise. The first major difference is actually an ideological one. In its own way, the Soviet Union, despite bureaucratization and restorationist tendencies, represented an alternative system to capitalism. China does not; indeed, it is just another type of capitalism, with strong state leadership, but in the end still capitalism. The second is economic and derives almost automatically from the first: the economies of China and the United States are highly interdependent, even after four years of Trump trying to decouple the U.S. economy through tariffs and protectionist policies. Whereas the Soviet Union and the United States had virtually no trade relations, China is second only to Japan as the largest holder of U.S. Treasury bonds, and is an essential part of the supply and value chains of many imperialist corporations.

This makes for a dispute of a different nature.

The White House published a new document summarizing U.S. policy toward China, in line with the 2017 national security strategy that characterized the Asian giant as the top threat to U.S. security, with Russia far behind. This document, which was sent to Congress on May 20, bears the signature of all the U.S. federal agencies —economic, diplomatic, defense, and security — that have closed ranks behind a policy guided first and foremost by hostility and competition, which has economic, political, and military ramifications. And at the strategic level, where imperialist leadership is at stake, there is no gap between Democrats and Republicans.

First published on May 25, 2020 in Spanish in La Izquierda Diario.