Unions should stop their policy of ‘engagement and cooperation’ with the bosses and represent the interest of working-class communities. 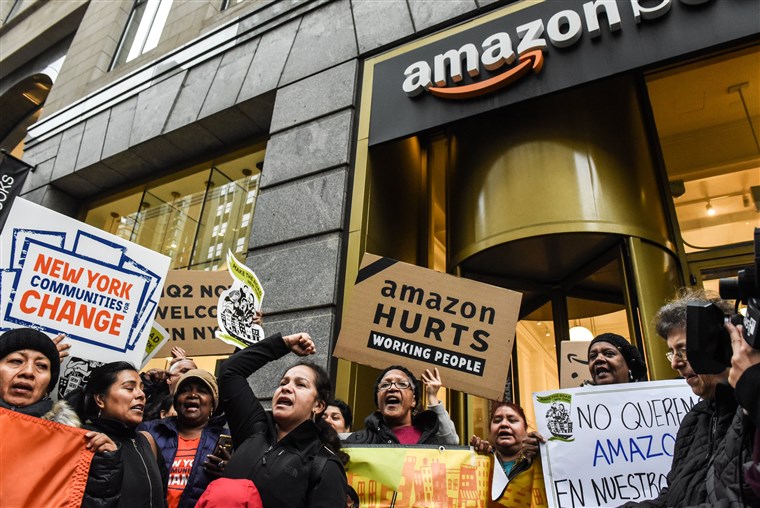 Protesters opposing Amazon's plan to build a headquarters in New York hold a protest outside of an Amazon book store on in Manhattan on Nov. 26, 2018.Stephanie Keith / Getty

By now many of us on the left, and especially those of us in New York City, know all about the Amazon scandal. How the company nearly stole billions of dollars in subsidies for a headquarters that would have most assuredly enriched developers and ran working class families out of Long Island City. We know it was a major victory won this February when Amazon abandoned their plans. But what has not been discussed enough is the role of the union bureaucracies in this whole experience. That is, in the kerfuffle between the RWDSU and the traitorous SEIU 32BJ, and their respective relationships to the deal, some lessons can be gleaned.

It was no secret of course that unions were divided on the question of Amazon. On one side was the RWDSU and the Teamsters who argued against the sweetheart deal, and on the other was SEIU 32BJ and the building trades, who prostrated themselves for the deal.

From 32BJ you have international president Hector Figueroa pleading the importance of keeping Amazon happy. He parroted the bosses’ myth that Amazon would bring in 25,000 jobs and billions of dollars in revenue into the City. Throughout the campaign, which included rallies on both sides of the question, he explained that he had a “fundamental disagreement of strategy” with the other unions over the demand of the company’s neutrality in union drives. He maintained that merely by Amazon locating itself in New York City, a “progressive community, a union town” that it was “eventually going to lead to some potential change down the road” just as long as the headquarters was built. Certainly, the 11,000 union jobs — some permanent, most not — he believed would have went to the building trades and 32BJ was also a factor outside of strategic considerations. After all, the union did not need to fight for neutrality because Amazon had promised to uphold an agreement “to use unionized security and building workers on its site.” So when Amazon pulled the plug on the deal, Figueroa and 32BJ put out a press release claiming that there was a “missed opportunity to engage one of the largest companies in the world and to create a pathway to union representation for one of the largest groups of predominantly non-union workers in our country.” His unionism is one of ‘engaging’ the boss, and after the Volkswagen debacle in Tennessee, we know the dead-end of cooperating with the boss.

This is business unionism, plain and simple. President Figueroa was willing to sacrifice the rest of the labor movement, not to mention the working class of Long Island City that would have  suffered Amazon’s presence and who made their disapproval to the plan well known. This is the myopic approach of the current union leaderships to serve only their shrinking memberships. Against this method, there are the examples of the teachers strikes that demonstrate the ways in which unions can take the proper lead in fighting for the whole working class and winning over the support necessary to win.

On the other side, you have Stuart Appelbaum, president of RWDSU, who fought for a neutrality agreement from Amazon in order to unionize the hypothetical headquarters. This potential organizing would have occurred alongside the campaigns at the Amazon warehouse on Staten Island that began in December and the union drives at Amazon-owned Whole Foods. His position was summed up by “If you’re aggressively anti-union, we shouldn’t be giving you subsidies.” A Vice-President of the Teamsters, George Miranda, also attacked Amazon for its “atrocious labor history.” Still, if the labor leaders stop only at fighting for union jobs, they lose out on the opportunity to be a tribune for all workers, particularly those who would have been displaced out of their homes. The labor movement will not grow by linear progression, but must jump in leaps and bounds by struggle for the millions of not-yet-organized workers as well as the millions of unionized workers.

It should be remembered too that Governor Cuomo, the x factor in all of this and the main proponent of giving Amazon a whole lot of money, was nominated at the state Democratic Party Convention for his position by none other than Stuart Appelbaum himself. What message does it send when the political face of the union bureaucracies are the Democrats like Cuomo? Or his state budget director that claimed that New York could not afford to allow only “unionized companies to enter” and so nonunion companies like Amazon must be enticed with big tax breaks. The money is there for corporate subsidies to corporations that pay so little in taxes already, but not for, say, unionized public works that would actually create those 25,000 jobs for workers who actually live in the neighborhoods?

In the end, Figueroa threw 32BJ’s lot in with Amazon against the working class, while Appelbaum was hamstrung by his support for Democrats. The only way unions will be able to fight back and recover from the bosses’ offensive is through democratic, militant unionism built on fighting the bosses, not through engagement and cooperation.