UPS is Firing Union Activists in the Middle of Contract Campaign

On Wednesday, in an act of blatant retaliation, UPS fired Ben Douglass and Rob Becker, both UPS drivers and alternate shop stewards in New York. 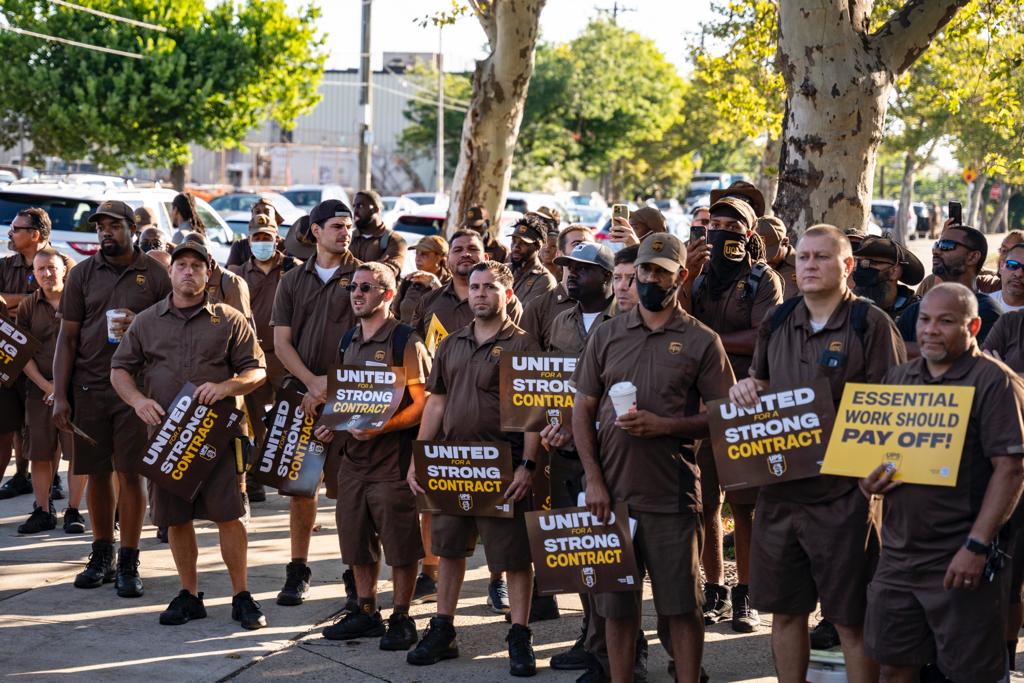 During the first week of August, UPS Teamsters organized rallies across the country with thousands of workers to kick off their 2023 contract campaign. From now to July of next year when the current contract is set to expire, UPS workers will be fighting for their demands and preparing to strike if they are not met. Among those demands are: air-conditioned trucks, no more excessive overtime, an end to the two-tier system of “22.4s,” higher part-time pay, more full-time jobs, an end to harassment, and an end to outsourcing. If UPS Teamsters don’t reach a suitable agreement with the company, over 340,000 workers could go on strike, bringing UPS — which moves 6% of the U.S. GDP — to a grinding halt.

It is no surprise that the bosses are afraid. Since the contract campaign began, UPS has ramped up its union busting tactics, particularly targeting activist workers. The company’s goal is clear: to instill fear and weaken the collective power and organization of UPS Teamsters. On Wednesday, August 24, in an act of blatant retaliation, UPS fired Ben Douglass and Rob Becker, both alternate shop stewards at their respective workplaces.

Douglass has been a driver for almost two years and an alternate shop steward for one, during which time he has consistently fought for his coworkers. Ben pushed for workers to take up the fight for COVID-19 safety measures such as on-site testing and temperature checks. During the heatwave, he fought for fans and AC, encouraging workers to take breaks to cool off, hydrate, and stay safe. Ben, along with many coworkers and other union activists, has also taken up broader struggles for racial, gender, and sexual equality, sometimes organizing coworkers to march together as Teamsters in movements beyond the workplace. The official reason given by management for firing Douglass was that he was unable to complete a challenging route in the midst of a heatwave.

Becker has been working for UPS for eight years and works out of the Nassau building on Long Island in New York. Despite having worked through the whole pandemic, the company is treating him as totally disposable. Becker has been targeted in particular because he helped sign his coworkers up to join the “9.5 list,” a contractual agreement that limits forced overtime. Becker was dismissed for stopping to buy green tea in the midst of a heat wave. This retaliation is particularly stark as it happens against a backdrop of increasing attention on UPS for not providing air conditioning in trucks, even in the midst of oppressive summer heat, which has resulted in drivers experiencing heat strokes and even dying.

As Douglass recently pointed out on Twitter, this retaliation is happening “while [workers] are forced to work in the brutal summer heat without AC, often without even a fan. Many are seeing the horror stories of UPS workers collapsing from heat exhaustion. Esteban Chavez, Jr. died because management refuses to prioritize safety.”

The retaliation isn’t just happening in New York, it’s occurring all across the country. According to Sean Orr, a UPS worker from Chicago, “management tried to crack down on us wearing union hats while on property” as a way to intimidate workers and hide the massive support from the workers. The UPS workers at that facility answered the intimidation by moving their Teamsters meeting on Thursday inside their facility, setting an example for workers across the country. As Sean said, “Not one inch to the company!”

UPS is a multi-billion dollar company. Throughout the pandemic and even now, the company is posting record profits — profits which have come off the back of workers like Douglass and Becker. Yet, instead of providing workers with safe working conditions, or even basic air conditioning in trucks in the crippling heat, UPS targets workers who stand up for their basic rights.

UPS, to maximize its profits, is constantly searching for different ways of exploiting its workers. In the last contract, for example, UPS imposed a two-tier system which created a new “second-class” of drivers. These “combo workers,” classified as “22.4s,” do the same job as long-term drivers but are paid up to eight dollars per hour less, with fewer benefits. The bosses also create a dangerous work environment, demanding a high volume of packages to be delivered at nerve-wracking speed, and hours-long shifts in traffic-jammed cities. But this isn’t limited to drivers alone — UPS also imposes grueling conditions on the warehouse workers who start their days as early as 1a.m. to guarantee that the trucks will be ready to deliver their packages across the state.

From Amazon to Starbucks to Trader Joe’s and even UPS, bosses have ramped up their union busting because they are afraid. Workers know they are essential, that they make everything run, and when they stand up and fight together, they can win. It is essential that we show solidarity with workers who are facing harassment and being fired.