Venezuela: Crisis Worsens After Controversial Election of the Constituent Assembly and Sanctions by the US

Between the farce of Maduro’s constituent assembly and the shallow cries for freedom and democracy by the right opposition–no respite for the Venezuelan people. 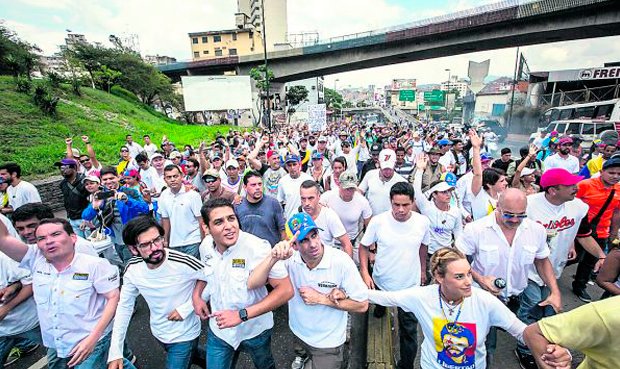 In one of the deadliest days of protest this year, 10 people died in clashes between protesters and police following the election on Sunday of a legislative body that plans to rewrite the country’s constitution. Many among the opposition (left and right) and elsewhere have denounced the elections for the Constituent Assembly as being rigged: this “constituent process” occurs within the framework of a permanent state of emergency, which gives free rein to the Constituent Assembly to give and take away wide, trampling democratic rights and elementary liberties.

Maduro’s government, amid the current crisis caused by the failing economy, has taken certain steps to consolidate its power over an increasingly angry and rebellious public: it prohibits or represses protests, prevents union elections in which unfavorable leaders may be elected, criminalizes strikes, and even punishes the distribution of leaflets. The National Electoral Council (CNE) prevented the legalization of leftist organizations opposed to the government and imposed an anti-democratic party reorganization that left out the minority organizations that do not have the resources of the state or businesses. The political left is prevented from opposing the Maduro’s policies within the democratic process while the right continues to enjoy considerable strength in several major political parties.

The results of the election held on Sunday, which did not so much as offer voters the option to reject the upcoming rewriting of the constitution, were manipulated by at least a million votes, according to Smartmatic. Maduro’s oppression of dissent continued Tuesday morning when two leaders of the opposition, Leopoldo López and Antonio Ledezma, were taken from their homes — where they were previously under house — by government intelligence agents.

The right-wing opposition organized behind the MUD (Mesa de la Unidad Democrática or the Democratic Unity Roundtable), on the other hand, claimed that seven million people voted in an informal referendum that they organized a week before. This figure is, too, blatantly inflated.

Maduro’s turn towards a more repressive government offers the opposition a chance to pose as the champions of democracy and civil rights. Those organized around the MUD, however, are the same figures and political forces that orchestrated the coup against Chávez in 2002, put in his place a businessman backed by the U.S. and dissolved the National Assembly. The multiple open calls to the military to drop their support of Maduro and “take the reins of the nation” are testimony of their reactionary putschism. And it makes sense: their economic program to “restore economic growth” includes attacks on workers’ wages and working conditions, a pro-business labor reform and cutbacks on public social spending. This measure will only be able to be imposed through the reckless repression of social protest.

Governments in Latin America and beyond condemned the election and the United States government imposed sanctions against Maduro and threatened further sanctions against Venezuela’s primary export, oil. Critics and politicians worry that a boycott against Venezuelan oil would further devastate the struggling economy, leading to a serious humanitarian crisis. Inflation and rising prices have caused a shortage of basic supplies in the country, leading to consistent protests against Maduro and even looting.

What a few years ago was a pleading attitude from President Maduro towards the U.S. and other governments, has since changed to scoffing nonchalance. In a televised speech to supporters, Maduro accused the Trump administration, which has long criticised Maduro, of hypocrisy, noting Trump’s election victory despite having nearly 3 million votes less than Hillary Clinton. “What a tremendous democracy!” Maduro said, stating that he doesn’t “take orders from the empire.” The current economic situation in the country is already severe, with hospitals short on supplies, severe shortages of food and other goods, and violence in the streets. Despite deceased president Hugo Chávez’s claims of developing a “21st-century socialism”, the economy remains very much dependent on the global capitalist market. The free fall of the price of oil since 2014 has dealt a heavy blow to the economy, which entered a spiral of recession, scarcity and inflation.

Venezuela became the emblem of center-left Pink Tide governments in Latin America in the years following the democratic election of Hugo Chávez in 1998. Chávez faced open resistance from conservative forces inside and out of Venezuela, such as an attempted coup supported by the Bush administration, in 2002. This imperialist attempt to overthrow Chávez only reinforced his popular support, as waves of protesters, mostly from the country’s lower class, marched and reinstated Chávez as president. In the following years of Chávez’s leadership, the military stood with the president.

Like many countries with a wealth of natural resources, in particular oil, Venezuela receives a high financial revenue that does not necessarily reach the greater population. President Chávez revolutionized the Venezuelan economy using money from the oil trade to carry out sweeping social programs that benefitted the lower class. But his progressive campaign fell short of eliminating the roots of capitalist production and a profit-driven economy. National and foreign capital kept their businesses, and when workers’ autonomous organizing threatened business interests, Chavez stepped in to secure their property and their profits. This was the case, for example, for the workers at the Argentine-owned Ternium Sidor steel factory, who demanded the expropriation and nationalization under workers’ control of the company. Chávez, under pressure of his regional ally, then-president of Argentina Néstor Kirchner, refused to nationalize the factory and instead repressed the workers, many of whom ended up in jail. As the struggle continued and the workers kept the conflict alive, Chávez paid the company owners almost 2 billion dollars in exchange for nationalizing the plant. (the Argentinean investors had paid 1.2 billion for it 2 years earlier).

The government of Hugo Chavez in Venezuela was a combination of charismatic leadership, progressive economic policies within the limits of a capitalist dependent economy, and a nationalist appeal of unity. Yet his power rested ultimately in the support of the military.

Nicolás Maduro, apart from his notable lack of charisma and political sharpness, has come into power only to face one of the worst crises the country has ever faced. This has strengthened the increasingly authoritarian turn that Maduro’s administration has taken. While a dependence on the oil industry keeps Venezuela at the mercy of global trading prices, President Maduro’s only recipe has been to concentrate more power in his hands and to stifle any dissent.

Venezuela is in a deep economic and social emergency. In the face of this bleak situation, neither Maduro’s increasingly repressive regime nor the right-wing opposition are offering a plan for the benefit of the working class and the poor. The only hope for Venezuela lies in the mobilization of workers and their organizations, independent from the government and the right-wing opposition.