Venezuela in the Crosshairs of Right Opposition and US Imperialism

The political crisis in Venezuela worsens every day, as the U.S. government interferes directly. 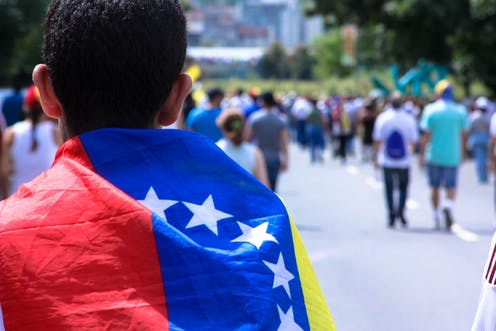 On January 10, Venezuelan President Nicolás Maduro was sworn in before the Supreme Court of Justice to begin a new six-year term. After President Hugo Chavez’s death in 2013, he was elected by special election and has governed since in the midst of a massive economic and political crisis. The past years have been characterized by hunger and poverty for the Venezuelan working class amidst US sanctions. Maduro’s reelection has generated a massive political crisis in which the government of Donald Trump is already intervening.

The statements of the president of the National Assembly were quickly echoed by the United States. On Saturday, Robert Palladino, spokesman for the U.S. State Department, called for the creation of a “new government in Venezuela.” In a press release, the State Department said that it supports Juan Guaidó as the leader of Venezuela.

The National Assembly, Led by the Right Wing, Goes on the Offensive

Maduro lost the majority of the National Assembly in the 2016 elections. Since then, it has been controlled by the right-wing opposition led by Guaidó, a legislator from the hardline Popular Will (Voluntad Popular) opposition party. Guaidó represents a right wing opposition to Maduro, supporting privatization, US intervention and further attacks on the working class.

Last week, Guaidó posted a series of tweets saying, “I assume the duty imposed by the Constitution and Article 333, which obliges all Venezuelans, vested with authority or not, to fight for the restitution of constitutional order.”

In response, Maduro said the National Assembly was performing like a “show of little boys,” dismissing the threat against his presidency. Venezuela’s prison minister threatened Guaidó with prison. “I’ve already prepared your cell and your uniform,” she said. “I hope you name your cabinet quickly so I know who is going down with you.”

The threat became a reality. On Sunday the media reported that Guaidó had been briefly detained by the Bolivarian Intelligence Service (Sebin). In doing this, the government was attempting to discipline the opposition.

The opposition’s call to ignore the government and to form a new one, demanding that the Armed Forces stand behind the opposition, could be interpreted as going down the road to a coup. Although Guaidó has declared that he has “all the pieces of the puzzle” to “evict” Maduro from power, and he has claimed to have social support and international support, the reality is different.

The opposition’s social support is weak. It has very low mobilization capacity, and according to polls a high percentage of the population would not attend the antigovernment demonstrations if they were called by the opposition. Indeed, the last rally called by Guaidó in Caracas on Saturday did not attract more than 500 people.

Because of its weakness, the right is seeking military intervention, calling on the Armed Forces to establish “order.” The right is also shamelessly betting on international, and particularly U.S., intervention. The Trump administration has already state time and time again that it supports the opposition and the ousting of Maduro.

Although little is known about the position of the Venezuelan armed forces, given the military’s secretiveness, the army proclaimed its loyalty to Maduro after the election. But the opposition believes it can make a dent in the army if international pressure against Maduro increases.

Along with Palladino’s comments on Saturday, White House National Security Adviser John Bolton said in a statement that “the United States does not recognize the illegitimate takeover of dictator Nicolás Maduro.” Bolton also said the Trump administration supports the National Assembly of Venezuela. “The only legitimate branch of government duly elected by the Venezuelan people,” he said.

You may be interested in No, Venezuela was Never Socialist.

Bolton added that the U.S. government supports the “courageous decision” of Guaidó and the National Assembly “to remove Maduro from power.” He also threatened Maduro’s government, saying the United States would use all its economic and diplomatic power “to push for the restoration of a Venezuelan democracy that reverses the current constitutional crisis.” These statements, beyond their cynicism and hypocrisy, point to a leap in imperialist interference in Venezuela.

However, the Trump administration merely follows a long line of US Presidents who have attempted to intervene in Venezuela. The clearest example was the US-sponsored coup attempt against democratically elected Hugo Chavez in 2002.

The Reactionary Role of the Lima Group

The U.S. government and the Venezuelan opposition do not lack reactionary allies in Latin America. They are organized in the Lima Group.

The Lima Group (Grupo de Lima) was created August 8 in the Peruvian capital of Lima, where representatives of 12 countries met to establish a “peaceful end” to the Venezuelan crisis.

In fact, the group was formed at the request of the United States to press for the fall of the Maduro government. The countries that signed the declaration were Argentina, Brazil, Canada, Chile, Colombia, Costa Rica, Guatemala, Honduras, Mexico, Panama and Peru.

Guaidó himself said on Saturday that “I have talked with [Argentine President Mauricio] Macri and [Brazilian President Jair] Bolsonaro, and on Tuesday we discussed a transition law, and we are going to discuss the OAS [Organization of American States],” just as he did with Mike Pompeo.

The Bolsonaro government “saluted” Guaidó’s willingness to “constitutionally assume” the Venezuelan presidency, given the “illegitimacy” of Maduro’s reassumption of power. Eduardo Bolsonaro, President Bolsonaro’s son and a federal deputy in Brazil, declared, in clear reference to foreign intervention, that Venezuela alone “does not have the strength to get rid of Maduro.”

The Argentine government of President Macri echoed these sentiments. Argentine Foreign Minister Jorge Faurie declared that “the Legislative Assembly is the only authority that Argentina and most of the international community recognizes as legitimate in Venezuela.”

On Wednesday, Bolsonaro and Macri will meet to continue discussing their policy against Venezuelan government.

Neither Maduro nor Imperialism

The collapse of the Venezuelan economy and Maduro’s reactionary and repressive military Bonapartism have led the Venezuelan masses to despair. This despair is now being used by the country’s right wing and U.S. imperialism to overthrow Maduro’s government and to manage the country under the whiplash of Washington.

The U.S. left must speak out against and confront the Trump government’s imperialist interventionism in Venezuela, as well as around the world. Yet, we must do this without giving any political support to the Maduro government, which does not represent the interests of the working class and the oppressed of Venezuela. After all, Maduro and his government propose that the working class pay for the economic crisis, while at the same time ensuring profits for Venezuela capitalists and privileges for the upper government bureaucracy.

While the Venezuelan right wing seeks the international support of the reactionary and racist government of Donald Trump, the youth and the working class of the United States have the responsibility to join in solidarity with our class brothers and sisters.