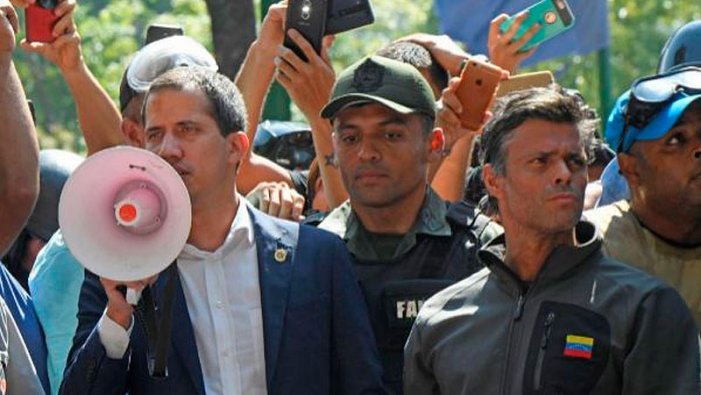 The members of the Workers’ League for Socialism (LTS) clearly reject the new attempt by the right-wing opposition to unleash a military coup. In our statement for May 1st, we pointed out that [self-proclaimed “interim president” Juan] Guaidó intended to use that date to renew his call for a coup. This prediction was confirmed on Tuesday.

As we have argued since the onset of imperialist aggression led by the U.S. government, we oppose and confront any imperialist interventionism, without implying any political support for the reactionary and anti-worker regime of Maduro and the Armed Forces. Trump and his ilk do not care at all about the suffering of Venezuelan people; their only objective is to install a puppet government in Venezuela at the service of their plans for recolonization – a plan that offers no progressive solution to the current misery.

This policy was supported by the governments of the Latin American Right that first recognized Guaidó, and then on Tuesday, came out in support of his coup attempt.

Since January 23, imperialism has used appeals, maneuvers and threats to try to split the Armed Forces in order to overthrow Maduro. After their attempts failed and their coup offensive entered a stalemate, they concentrated on economic aggression and asphyxiation, which has worsened the hardships of the people. The plans for a coup remained latent, and were reactivated with this Tuesday’s attempt.

A government emerging from a military coup, under the control of the U.S., would mean nothing good for the masses! In the name of “freedom” and “democracy,” they are attempting to install a government of national subordination to the dictates of the IMF and imperialist capital, who would become the new masters of the country, with the imposition of more foreign debt and the massive surrender of companies and resources in a wave of privatizations. This plan is totally pro-business, anti-national and against the people. The needs of working people would be, even further subordinated to guaranteeing capitalist interests and profits. Those of us who confront Maduro’s government and its policies must firmly oppose this recolonizing offensive by imperialism, with Guaidó as its vehicle.

The Maduro government, however, is not taking any real anti-imperialist measures. It just places itself under the wing of powers like Russia or China, while defending itself against the coup with bureaucratic-military methods that also afflict the people. All it does is strengthen the Armed Forces as the true power and arbiter of the situation. We do not place any trust in these Armed Forces, who may end up reaching some kind of negotiated settlement with the right. That is why we affirm that the struggle against the coup and against imperialism must be carried out with total political independence. We workers need our own political program, with the perspective of struggling against the misery we are subjected to and against the authoritarianism of the government.

We must put forward a program that aims to attack the interests of imperialist capital and of the parasitic national bourgeoisie (both its oppositional and its chavista wings), because that is the only way we can fight to win our demands and stop the appetites of the U.S. as well as the plundering by international capital. A defeat of the pro-imperialist coup-attempt by our own methods of struggle, based on a program with these characteristics, would put us in better conditions to confront Maduro.

Together with the organizations made up of workers, women and youth with whom we form the Trotskyist Fraction for the Fourth International (FT-CI) in different countries of Latin America, Europe and the United States, we are firmly opposed to this new coup attempt.