Victory in Argentina against imperialist mining

After massive mobilizations in Mendoza, Argentina, the government was forced to back off from polluting open-pit mining. 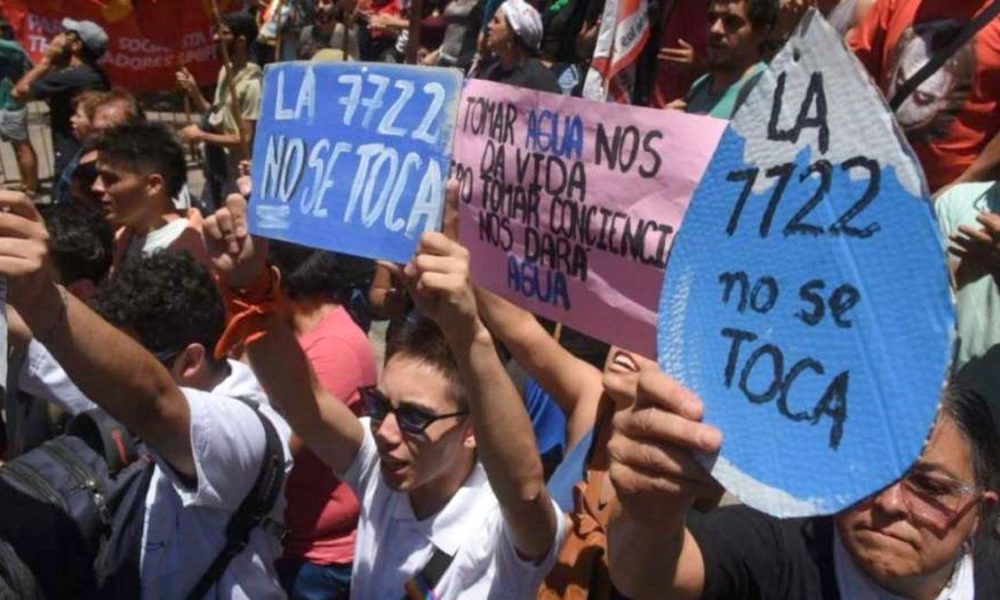 In December, thousands of protesters mobilized in the Argentine city of Mendoza to protest  the modification of Law 7722, which prohibits open-pit mining. This law was approved in 2007, as a result of  a struggle against open-pit mining, under the government of Cristina Kirchner. After years of repeated attempts to modify Law 7722, the local government in Mendoza attempted an offensive by passing a new law, Law 9209. This law, which only lasted a few days, modified the text of the previous law, eliminating words such as “cyanide” and “sulfuric acid,” substances expressly prohibited in Law 7722. This type of mining requires an enormous volume of water to operate, water that is scarce in the face of climate change and a situation of drought and decreased snowfall in the region. The limited amount of water is required for both crops and human consumption, and, even worse, the lack of controls by mining companies in neighboring cities has caused the contamination of important water sources with toxic substances.

The plan of the local government, which supported former President Macri in the last elections, was to pass this law (9209) to allow the installation of mining companies that use cyanide and other toxic substances, which have already caused serious environmental problems in other cities in Argentina and Latin America. Several mining projects had been waiting for a long time to start operating in Mendoza and were stopped by social protest.

For this plan, the local government had the support of the current Peronist president, Alberto Fernández, who made a speech with mining representatives assuring them that this reform would be approved. In Mendoza, his representatives voted for replacing Law 7722, which protects water and soil in favor of 9209, benefiting mining capital. This is in line with the national government’s increasing concessions to mining companies, on which it has reduced taxes in recent weeks.

Only the legislators of the Left Front denounced the open-pit mining plan, and accompanied the mobilizations. Despite the parliamentary pact between Macrism and Peronism, the struggle of the movement in defense of the environment, the youth, the workers, and the people of Mendoza scored a victory, pushing back the “cyanide law,” as they decided to call it.

The government responded to the mobilizations first with repression and then with a supposed “suspension” of the law until the necessary social consensus was achieved. However, aware of the political manoeuvres, the mobilised sectors, organised in a Coordinating Committee throughout the territory, maintained the demonstrations until the new law was completely annulled.

The movement was powerful because it included the youth as well as thousands of teachers, rural and urban workers, and even state employees. An example of the strength achieved was that a group of supermarket workers, which the union bureaucracy tried to mobilize in favor of the government, refused to defend the government politics against the people, and published photos in their workplaces in defense of Law 7722 and clean water. This unity shows how necessary class unity with the workers is to strengthen the struggle in defense of the environment. During these days, many pointed out the important role of the legislators of the Left Front, who had warned of the government’s intentions to modify law 7722, denounced the role of Peronism, and dismantled the false arguments of both in favor of contaminating forms of mining.

The modification proposed and voted for by both parties was an attempt to favor the business of multinational mining companies like Canada’s Barrick Gold, among others. Around the world, this system of plundering and pollution only brings destruction and death. Some examples are the breaking of the Brumadinho mining dike in Brazil, which left dozens of people dead and missing; the cyanide spills in the Jachal River, in Argentina; and the collapse of the dike at Imperial Metals’ Mount Polley mine, in Canada. These precedents mobilized the people of Mendoza to defend their water over the supposed development and generation of jobs promised by the mining companies and the government.

In reality, as denounced by the Left Front in the Legislature and in the streets, open-pit mining generates a tiny amount of jobs for a short time, devastating the soil and damaging the health of the local inhabitants. In return, mining companies pay ridiculously low taxes, often  less than 3% on the total declared metal they take away. This represents a full-blown imperialist plunder. After a few years, the areas affected by the mega-mining are even more impoverished and destroyed than before. The myths of mining propaganda were also debunked by our sister website, La Izquierda Diario, which played an important role against the media siege of the official media.

The well-known environmental consequences of open-pit mining have led to a ban in Canada and the European Union.  However, the imperialist multinationals continue to use open pit mining in the poorest countries of Latin America, Africa and Asia. They plunder the main natural resources of their economies in exchange for paltry royalties, while polluting the water and land, displacing the native peoples, and causing diseases like cancer, lung and skin conditions, and pregnancy problems. The consequences on the environment are enormous. Open pit mining contaminates water sources such as glaciers, modifies the land causing droughts, landslides and the disappearance of flora and fauna.  The governments of the so-called “Pink Tide” allowed and promoted this plundering of resources in the region, which has only strengthened the grip of global imperialism over the economies of Latin America. Instead of accepting such exploitation, it is necessary to nationalize the strategic resources in the hands of the working class, expelling the imperialist mining companies from the region, in order to develop forms of production consistent with the needs of the people and with the care of the environment. The declarations of the governments of the central countries against climate change are hypocritical when they promote the devastation carried out by these big capitalist companies for the sake of imperialist enrichment.

The fight to end  open-pit mining is part of a larger struggle against climate change and environmental destruction that is inseparable from the anti-imperialist struggle against economic and political interference in Latin America and the world. Thousands of young people know that we will have no future with a capitalist system that represents depredation, plunder and death for the sake of supposed development. This victory of the people of Mendoza in defense of water holds important lessons, in a context of growing threat from climate change and growing organization against the destruction of the planet. OP