As far-right groups continue to operate with near impunity, authorities are cracking down on activists who are attempting to prevent the deaths of immigrants. 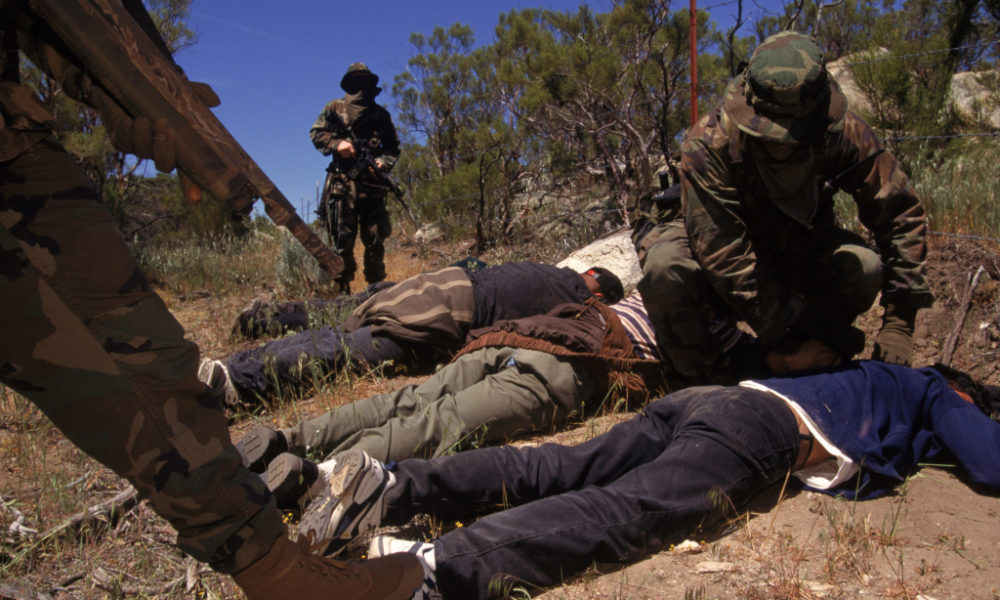 In the past few weeks, videos have been posted on social media that show armed and masked men detaining undocumented immigrants at the border. In one video, over a hundred people—some of whom are children—are seen huddled together in the dark, being held at gunpoint before the U.S. Border Patrol arrives to take them away. This is all part of a strategy from far-right militias: they announce themselves as law enforcement and then illegally detain people.

On April 20th, Larry Hopkins—the leader of the United Constitutional Patriots (UCP)—was arrested on weapons charges. This came in response to public outcry about the actions of the right-wing militia. Reports show that over 5,000 people have been detained by the UCP, and videos show them terrorizing their victims.

A Leader is Not the Organization

The arrest of Hopkins is not, as many would have us believe, the end of his organization. Other UCP members are still free to terrorize people crossing the border. A narrative of a single person as the “mastermind” of an extremist or terrorist organization has been popularized for a key reason: it is easier to sell the general public on the mastermind narrative than it is to see right-wing terrorists as a natural product of our current political situation. Donald Trump and the Republican Party have begun to call the situation at the border an “invasion.” Trump has called undocumented immigrants rapists and murderers and also declared a state of emergency at the border. These actions and rhetoric have led to an uptick in the activity of militias like the UCP, who believe that Central and South American people are coming over the border to harm American citizens.

While Trump has heightened the toxic rhetoric surrounding the border, it is important to note that border militias are far from new. They have operated with near impunity for years, including under President Obama. Images from 2014 show border patrol agents giving directions to militia members. Around the same time, videos were posted by various militias that gave instructions about how to use firearms to stop immigrants. It is no surprise that the Obama administration turned a blind eye to such behavior given the administration’s policy of deportations—deporting over 300,000 people a year on average. Obama also popularized the practice of saying that the state was only deporting “criminals.” This language of criminality is the same rationale that we see militias using today.

The State Will Never Fight Fascism and Racism

In some areas, the arrest of Hopkins has been cheered as a progressive victory. But Hopkins’s arrest was only lip service to those who are concerned about the rise of violent white supremacist organizations: after all, the UCP was filmed holding people at gunpoint. With Hopkins publicly condemned and the state’s PR crisis solved, the other members of UCP are free to go about their business as usual.

This is due to the fact that the UCP and the state are on the same side. Both the state and the militias have a vested interest in keeping borders closed and in intimidating those who wish to cross them. Indeed, a spokesman for the UCP said that Border Patrol gave them specific guidelines on how to operate—such as to shoot only when shot at and not to physically touch the immigrants. It is no coincidence that Hopkins wore a military-esque uniform complete with a badge “similar in appearance to a police officer badge.” The work done by both groups is towards the same end. One member of the UCP said, “We wouldn’t be there if [the border patrol] didn’t want us there, they just can’t publicly say that.”

We can clearly see the ways in which the US government is on the side of these border terrorists. Only one person was arrested after whole groups of militia members  held immigrants at gunpoint while impersonating police officers. No such leniency is shown to activists on the side of the immigrants. Look at the fate of activists who were doing water-drops – leaving water and canned food near the border so that those crossing could find it. Several of these activists were convicted in January on misdemeanor charges of entering a wildlife refuge without a permit. More trials are pending, and one activist is being charged with a felony for providing food and shelter to undocumented immigrants. Four activists—whose only crime is leaving food and water in a nature refuge—have been convicted, with several others waiting to stand trial. Activists have posted videos showing Border Patrol agents actively destroying water drops, for which they face no consequences. This contrast makes it increasingly clear who the state views as its allies and who it views as its enemies.

The rise of extremist activity at the border is a deeply disturbing phenomenon. As far-right groups continue to operate with near impunity, authorities are cracking down on activists who are attempting to prevent the deaths of immigrants. These two things are not unconnected. We must remain remain distrustful of any narrative that paints the armed bodies of the state as anything other than racist tools of oppression against immigrants. The arrest of Hopkins is an attempt to placate the outrage about militias, but it will continue to be business as usual at the border until we can stop this combined terror of the state and its private allies.