Two cops aimed their guns at a Black U.S. Army medic in a traffic stop over his license plate, then assaulted him. For four months, they were protected. Can officials be trusted to “investigate” police racism? 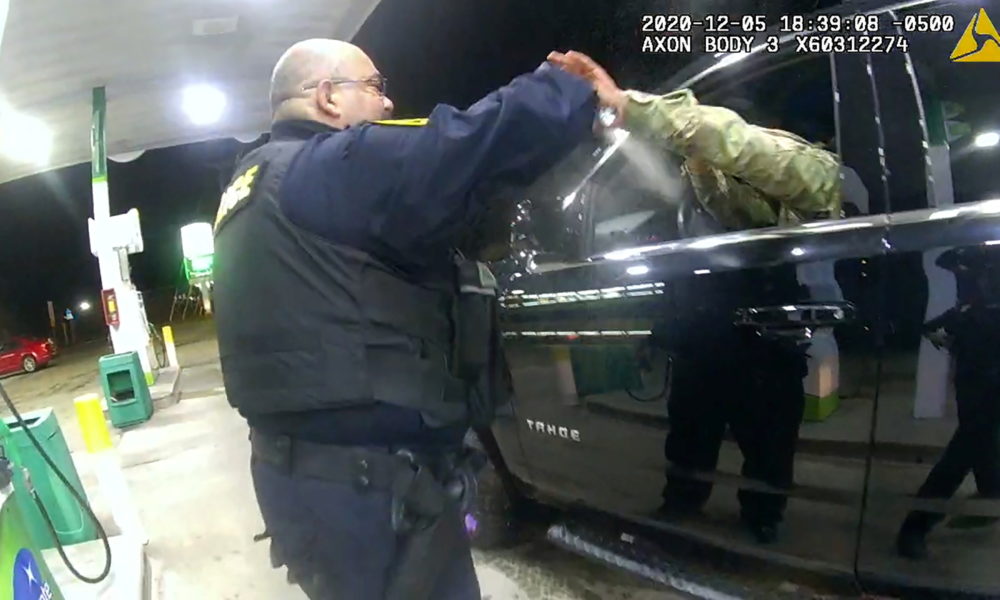 On December 5, 2020, two cops pulled over Caron Nazario while he was driving through the small town of Windsor, Virginia, allegedly for not displaying a license plate and having tinted windows. In fact, Nazario had a temporary plate in the window of his new car.

Nazario, who is Black and Latino, was returning from a drill weekend as a second lieutenant in the U.S. Army Medical Corps. He did not want to stop at night along the highway, so he slowly drove one mile and stopped at a gas station with witnesses. At the lighted gas station, his temporary plate was visible.

Officers Daniel Crocker and Joe Gutierrez immediately drew their guns, aimed them at Nazario, and began screaming orders. Gutierrez went on to threaten, pepper spray, kick, and handcuff him. Yet the cops did not arrest or charge him with any crime. Nazario filmed the stop on his phone, and the cops were wearing cameras, although Gutierrez’s camera was switched off while he was assaulting Nazario.

Nazario was wearing his Army uniform. The cops alternately screamed for him to put his hands out of his window and to exit his car, impossible at the same time. Nazario was held hostage and forced to guess what might or might not provoke the cops to shoot him.

Nazario remained in his car, not moving, and held his hands out the window. He repeatedly asked what was going on. Gutierrez responded, “What’s going on is you’re fixing to ride the lightning, son,” a threat referring to both his taser, which he pulled out, and execution by electric chair. When Nazario frankly explained that he was afraid to exit his car for fear the cops would shoot him, Gutierrez shouted, “You should be.” Gutierrez screamed repeatedly that Nazario had to obey police orders. Then he announced, “You’re being stopped for a traffic violation. You’re not cooperating…you’re under arrest for, you’re being detained…for obstruction of justice.”

Gutierrez grabbed Nazario’s arm and demanded he get out of the car. When Nazario said, “Get your hands off me,” Gutierrez pepper sprayed him in the face and shouted, “Get out of the car and get on the ground or you’re going to get it again.” Nazario was terrified to lower his hands or undo his own seatbelt, but slowly obeyed. The cops pushed the temporarily blinded soldier onto his knees.

This brutality was covered up for four months even though the city had the police recordings and the police chief came to the gas station after the stop. The incident only became public in early April when Nazario sued the two cops and released his own video and city recordings.

The cops tried to blame Nazario for their violence. Gutierrez offered to let him go as long as he would “not fight and argue.” He said he would not bring any charges against Nazario, “if you want to chill and let this go.” He also blamed “the media spewing race relations between law enforcement and minorities.”

The cops used the threat of filing false criminal charges and especially the threat that charges would lead to punishment by Nazario’s Army superiors to try to silence him. Both wrote reports falsely stating Nazario refused to show his hands and falsely accusing him of crimes but wrote that they wished to show leniency to help him avoid discipline by the military. Gutierrez falsely claimed that Nazario assaulted him.

Following national coverage, Virginia Governor Ralph Northam called it “disturbing” and announced he would order the state police to “investigate.” After this the town of Windsor announced it had fired Officer Gutierrez based on its own internal “investigation.”

Solving Police Racism by Weeding Out “Bad Apples” is a Front

It is unacceptable that Crocker is still on the force. Crocker radioed that the license plate stop was a “high-risk traffic stop.” He claimed that by driving slowly to a nearby gas station, Nazario was “eluding police.” The dispatcher then declared a “felony traffic stop.” Crocker and his department declared Nazario guilty of a made-up crime from the start. Crocker aimed his gun at Nazario and did nothing to stop his fellow cop when he openly threatened, then pepper sprayed Nazario.

Joe Biden has argued that racist police violence is only caused by individual “bad apple” cops. During the October 20, 2020 presidential debate, Biden said:

The vast majority of police officers are good, decent, honorable men and women. They risk their lives every day to take care of us. But there are some bad apples and when they find them, they have to be sorted out. They have to be held accountable.

In Virginia, after authorities hid what happened for months, they are trying to limit the blame to one “bad apple” cop, Joe Gutierrez. The Bad Apple theory is a strategic lie to control public outrage and resist action against the policing system.

Gutierrez has not been criminally charged with aggravated assault, making a murder threat, or perjury. The official response is not actually intended to combat police racism.

Democratic Governor Ralph Northam (who in 2019 admitted, then denied, dressing up in blackface decades ago) has called for “investigation” by the state police force. The city government now claims that it had begun “investigating” the incident in January or December. Yet in early April, the police chief refused to comment to reporters on it.

When evidence is revealed that definitely proves crimes were committed by cops, it is not acceptable for authorities to merely promise that those actions will be “investigated.” “Investigations” by any police forces or government officials are not trustworthy. In many cases, no action has been taken, and guilty cops have been shielded, despite the government holding clear evidence of their crimes. It is a bare minimum for government authorities who see conclusive evidence of crimes by cops to say openly that they are guilty. Refusing to do this is not being “objective.” It is protecting the system.

“Investigations” where the search for information and action to be taken are in the hands of police forces or government officials are not neutral. They are a political process. Authorities “investigate” in response to the balance of conflicting forces. Their primary purpose is to divert and demobilize mass action against the policing system. Simultaneously, they authorize tear gas and rubber bullets against BLM protesters.

The town of Windsor has declared it has given better training to police to help them not wrongfully attack Black people. This is not credible when the police chief visited the scene of Nazario’s stop but did not fire Gutierrez and concealed the incident.

In suburban Minneapolis, Officer Kim Potter who fatally shot 20-year-old Daunte Wright on April 11 says that she confused her gun for her taser. Yet she was a 26-year cop and president of her local police “union.” She was actually training a younger cop at the time she murdered Wright. Promises that internal “training” will end police crimes defy belief.

Every act of racist violence by police that is exposed begs the question: how many more of these crimes remain hidden under the rug? Any honest answer indicates that someone other than fellow cops and government officials has to obtain access to all evidence and hunt for the truth and target all police shown to have committed crimes against (usually Black and brown) people. What is needed is not a belated show of agreeing to (inadequately) punish some “bad apples.” Real action would mean an immense purge of tens of thousands of cops. That would be inseparable from abolishing the police. The capitalist politicians who oppose doing that all defend the Bad Apple theory.

The police are not going to be non-racist in their everyday actions when one of every 50 Black men in the United States is serving a prison sentence of more than one year at any moment, and many thousands of Black people are held in jail before trial unable to pay bail or lawyers’ fees.

There are a mountain of concealed Joe Gutierrezes and Daniel Crockers. Hundreds of police chiefs have promoted their crimes. Action against police racism does not mean weeding out a tiny number of “bad apples” when public attention becomes uncomfortable. It means fighting the police as an institution, and only the multiracial working class can do that. To do it, we have to break with the politicians from the Democratic and Republican Parties that run the police.

Those politicians are charging Officer Potter with second degree manslaughter, effectively accepting her claim that she is not fully responsible for Wright’s death.

A real “investigation” and action against police crimes can only be carried out with uprisings and huge workplace strikes against racism. We stand with those who are defying curfews and violent repression against Black Lives Matter protesters.