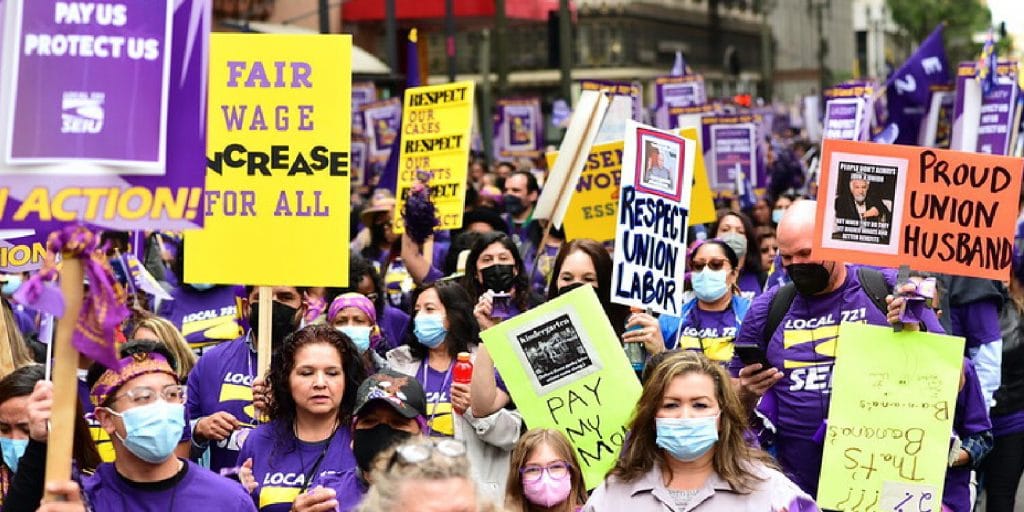 Four days ago, union leaders of SEIU 721 — a union of 55,000 on the verge of striking — announced they’ve reached a deal with the Los Angeles County Board of Supervisors. They’re announcing a historic win — but there is no deal unless the members vote for it.

There are big problems with the proposed agreement, and the rank and file should vote against it.

The proposed deal amounts to a major pay cut for the union. And it doesn’t clearly address some of the most important issues, like massive understaffing, privatization, or the fight for reproductive rights. We are waiting for the specific language of the Tentative Agreement for more information, but at this critical time 98 percent voted for a possible strike, so we need to continue to fight while the iron is hot!

Now is the time to vote “No!” to the new agreement. A powerful “No!” vote will send the SEIU leadership back to the negotiating table to wring far more, and far better, concessions from the bosses. The bosses will give up nothing without a fight. All the power lies in the hands of the SEIU rank and file, who are ready to strike. They make up a crucial part of the backbone of human services — from medical care to social work — in the second biggest city in the country.

On the heels of an overwhelming strike authorization vote on May 16, SEIU Local 721 leaders announced a historic victory after negotiations with the LA County Board of Supervisors. They wrote to their members:

After many days of intense negotiations our union has won a landmark 3-year agreement. It includes THE BIGGEST ONE-YEAR GENERAL SALARY INCREASE IN LA COUNTY HISTORY.

Members would receive additional money to offset medical premium increases, and between $100-$375 per month for help with child or elder care. And the leadership’s announcement mentions a “3-year plan to contract in hundreds of County jobs” — apparently to address understaffing.

Problems with the Contract

Any agreement with the LA County Board of Supervisors should be a historic win, for a few reasons. As one member pointed out to Left Voice, SEIU 721 has been standing on the front lines of a pandemic that has claimed many of their own members. They’ve been hailed as heroes, but many in 721 are paid so little that they have to use the same social services as the impoverished people they serve. Local 721’s members have been overworked, faced with providing health and social services to the second biggest city in the U.S. while being extremely understaffed.

Unfortunately, though, this proposed agreement isn’t the win the union deserves.

The leadership is calling this a major win since it contains “THE BIGGEST ONE-YEAR GENERAL SALARY INCREASE IN LA COUNTY HISTORY.” This is true — but it’s still a very large pay cut to the union’s members.

This is because even the biggest raise — 5.5 percent in the first year — doesn’t compete with surging inflation. In other words, prices are shooting up faster than this raise — or any of the other raises after this one — are able to cope with.

Gasoline prices are up 46 percent since last year. That’s eight times more than the biggest raise SEIU members would get. Groceries are 9.5 percent more expensive — about double the first year raise. Transportation is up 20 percent, about five times the highest raise.

But beyond just pay, the agreement doesn’t have a clear plan to deal with other crucial things — like massive understaffing, or making sure that any jobs created to address understaffing will be union jobs rather than highly exploited, cheap contracted labor that will undercut union power.

A Better Deal Is Possible

SEIU 721 has been brutalized by working on the front lines of a pandemic for paltry pay and without the resources they need. They deserve a better deal, and a better deal is possible. But that means a strong “No!” vote on this proposed deal that sends the leaders back to the negotiating table.

There are key things the union needs to keep fighting for.

The union must demand a real raise that allows members of 721 to survive. With overall inflation at 8.5 percent, anything less than that is effectively a pay decrease. SEIU members must be offered a contract with raises of at least 9 to 10 percent to meet inflation and still be a raise.

But union members deserve adequate staffing with union jobs, too.Due to the “Great Resignation” during and after the pandemic, workers are leaving public service in droves. LA County workers have also lost their lives fighting the pandemic on the frontline. Many SEIU workers simply couldn’t withstand the constant influx of needless deaths of some of the most vulnerable residents of the county—nor should any have had to. The county must offer enough pay to fill these positions with union jobs and make extensive budget changes to further help the patients and other vulnerable communities served by SEIU.

That also has to mean an end to the outsourcing of these jobs to non-union contractors, a practice designed by capital to have free reign over the exploitation of an unorganized workforce.

SEIU 721 has the power to win those demands. 98 percent voted for strike authorization. People are still ready to fight! Its union members are the people who do much of the major healthcare and social service work that keeps LA running in the first place. Winning these, though, first means a strong “No!” vote to the proposed agreement — to send a message to the bosses about who holds the real power in the negotiation: the rank and file who could go on strike.

To give the negotiating team the most leverage, those negotiating sessions have to be open to all members. If the demands being made in contract negotiations were open to the rank-and-file members, they could support the bargaining committee and pressure management to respect our union.

A strike is based entirely on workers withholding their labor in order to force an improvement in their wages, working conditions, and the health and safety of their patients and clients. Without a unified workforce, without a true strike that shuts down offices, a strike would be merely symbolic and would not result in real concessions from the Board of Supervisors.

More than this, SEIU’s fight isn’t just SEIU’s. It’s key, right now, for the union leaders and members to organize and call for active support from every union in LA. This is a fight for the labor movement, and it could be an example to those workers forming unions around the country like Amazon and Starbucks.

Even before the votes had been counted, management began to retaliate against union workers. SEIU 721 will defend its members against retaliation, but we need the rest of the labor movement to back us as well. Rejecting this initial offer and continuing to prepare for a strike would empower the members and the labor movement. Workers must stand in solidarity with each other in order to win. The more it’s clear that unions are standing together, the more pressure on LA County bosses to concede major wins to Local 721.

Finally, it’s crucial for Local 721 to link up its struggle with the wider fight for reproductive rights. Abortion rights are worker rights — it’s working-class and oppressed people who would be affected most if Roe v. Wade fell. 721’s healthcare and social service workers — and their overwhelming strike authorization vote — hold a key leverage not just for their own contracts but for the fight for the right to abortions generally. Linking 721’s fight for abortion rights would also mean building a broader solidarity with other workers. Major concessions from LA County’s bosses are possible. But first that means a “No!” vote.