The covid-19 pandemic is killing hundreds of people a day in the U.S. alone. We need drastic measures to address the scarcity of ventilators and protective gear. 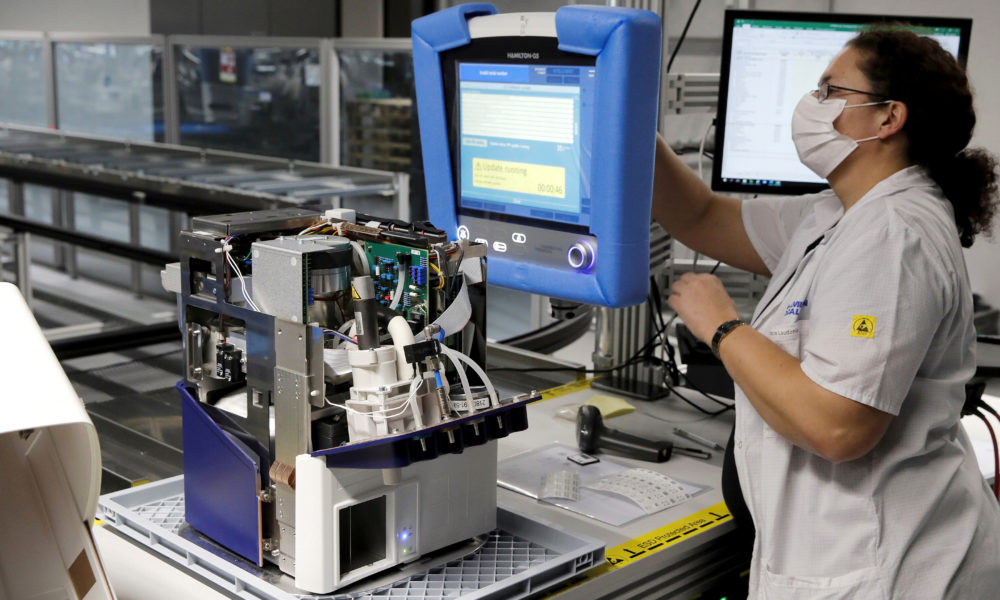 As of Friday, the United States has more confirmed cases of covid-19 than any other country in the world. The  fragmented and extremely commodified nature of the U.S. healthcare system is simply not prepared to provide appropriate care to the thousands of patients flooding the hospitals, not to mention the thousands more that are on the way. In many hospitals nurses and doctors lack even the most basic protective gear, and the number of ventilators currently available is far short of what will be needed in just a week or two.

Earlier this week, president Donald Trump invoked the Defense Production Act, threatening to take control of certain industries in order to produce the much needed protective and technological equipment. However, he has not taken any further measure in this regard. Instead, he has been waiting for corporations to make the decision to invest, based on their calculations of the costs involved and the profits they can make.

This Friday, the New York Times reported that an almost finished deal with General Motors and Ventec Life Systems was put on hold because the price tag for the production of 80,000 ventilators was more than $1 billion. At the same time, hospitals across the country—also more concerned about their bottom line than with preparing for the peak of the pandemic—are postponing the purchase of additional necessary ventilators due to high costs.

Let’s remember that GM filed for bankruptcy in 2009 and received a $50 billion bailout from the federal government (much of which was never paid back). Now the world  is facing the most critical public health emergency of the last 100 years, and this same company is delaying the production of life-saving ventilators in order to make a profit

But this is what capitalism is about, after all, and we can’t expect corporations to save the day when they are the ones who created these problems in the first place. We can’t rely on capitalism’s rules, on the much touted laws of supply and demand, to address the urgent needs of our population. The only immediate solution, even if partial and late, is to nationalize the key industries that can produce ventilators, starting with GM and Ventec Life Systems. The government should force ventilator companies to share their blueprints and technical knowledge for the production of their equipment, and put all capable companies to work producing them right now.

From the beginning, Trump has underestimated the threat of this pandemic. Starting on January 22, he has repeatedly claimed that the coronavirus was “under control,” that it was comparable to a regular flu, and more recently he questioned the need for tens of thousands of ventilators. He has refused to use the test provided by the World Health Organization, and has intentionally restricted the availability of tests to keep the number of cases artificially low. The emergency measures to address this public health emergency, including the nationalization of the healthcare system (just like Spain and Ireland have swiftly done as a response to the pandemic) and the nationalization and immediate retooling of key industries, should have been taken two months ago. Now New York hospitals are almost at maximum capacity and the dearth of protective gear is causing health care workers to get sick and die. New York hospitals have already been stretched to the limit, as reports of ventilators being shared between two patients graphically show. The scarcity of ventilators means that hundreds of patients with acute respiratory distress will not have the mechanic support they need to survive. And the responsibility for those lost lives will fall squarely on Trump, GM, and Ventec.

In order to survive this crisis we need to nationalize GM, Ventec, 3M, and other key industries and put them under workers’ control. This government can’t be trusted because, as we have seen, it only cares about securing profits for the capitalists. The workers at these companies are the only ones who have the knowledge and ability to retool the factories and run them, while ensuring safe working conditions for those in production. The time for lukewarm ideas is past, we need bold, radical measures now.