Was the New Deal Racist?

The New Deal has been historically recognized as having a built-in anti-black bias. Jacobin magazine is trying to whitewash it. 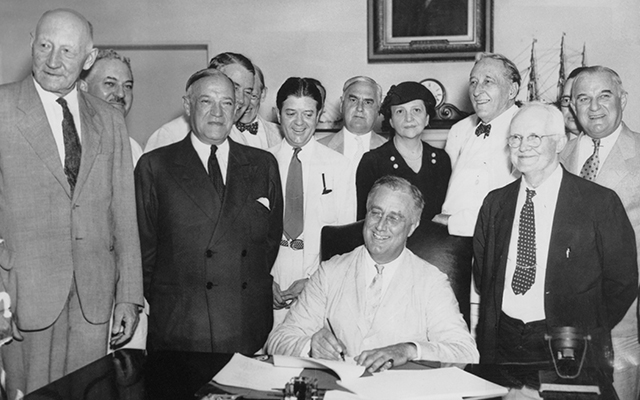 In a recent episode of Jacobin Podcast on June 25, Jacobin editors and DSA members Seth Ackerman and Micah Uetricht reopened a long-settled question about FDR’s New Deal: whether it included elements that reinforced racial oppression. That the New Deal included anti-black provisions has been understood by scholars and political activists alike for several decades. But in their zealous push to lift the image of Bernie Sanders, Ackerman and Uetricht feel compelled not only to brush aside Sanders’ flaws but also to exonerate his main political reference point, FDR, and his temporary allies, the white supremacist Southern Democrats.

The New Deal was the largest bundle of government policies ever implemented in the United States. Among other progressive measures, it gave workers the right to unionize and created the pension system for working people that still stands today. The government did this only as a response against increasingly disruptive pressure from workers, who were staging strikes nationwide, defying the police and shutting down entire cities. But apart from this, it included provisions that deepened and reproduced racial oppression.

Racial Bias in the New Deal

In discussing the racial dimension of the New Deal, it is necessary to define what is meant by “racism.” The latter is a colloquial term that usually refers to one of two things: (1) Racial prejudice against individuals who belong to certain ethnic groups or who have certain physical characteristics (like dark skin color). For example, one might believe that Latinxs are lazy, or that Black people are intrinsically more prone to commit crimes. (2) Racial oppression, in which certain communities are excluded from economic or social benefits, or treated as inferior to white European descendants. For example, an employer might not hire Muslims, or a venue might exclude Black patrons. It’s easy to see that racial prejudice feeds racial oppression, and vice versa. Whereas racial prejudice serves to justify laws, regulations and policies that hurt racial minorities, these policies, in turn, uphold and reproduce structural inequalities, segregation and racial prejudice, in a vicious circle that can only be confronted by indicting the whole social and economic system.

Calling the New Deal “racist” might sound hyperbolic. Can we so easily indict the most important public and social spending program in U.S. history? In their landmark work “Racial Formation in the United States,” Michael Omi and Howard Winant assert that a “racial project can be defined as racist if and only if it creates or reproduces structures of domination based on essentialist categories of race.” New Deal policies such as public works or social security benefited millions of workers, but there is no denying that its main programs included clauses that specifically hurt and excluded Black people. This is the case of the housing programs administered by the Federal Housing Administration, the Wagner Act (or National Labor Relations Act) and the Social Security Act.

The New Deal housing program was massive, and it shaped the urban and suburban landscapes across the United States up to this day. It worked as a loan guarantee program—which means that the newly created Federal Housing Administration (FHA) backed the mortgage loans that banks offered. But to do so, the FHA itself took on the task of assessing the quality of each mortgage, that is, the likelihood that the loan would be paid back. For this purpose they used the now infamous method of redlining, by which they denied mortgages in Black or racially mixed neighborhoods. As a consequence, Black families were locked in a double bind: They were denied loans to buy new houses in their neighborhoods, and they were excluded from the “financially sound” pure-white neighborhoods by racially restrictive covenants, which prevented homeowners from selling their houses to Black people. Put simply, the FHA funded white flight, while Black families remained confined to ever more economically depressed urban areas.

But Ackerman does not think this is enough to consider the New Deal racially oppressive. In his view, the “trope” about the “racist New Deal … bubbled up from the academia.” Toward the end of the podcast episode, Uetricht and Ackerman conclude that the FHA did not introduce white supremacy into the housing market. Rather, it only reproduced and perpetuated the pervasive white supremacy that already dominated the sector. In a sleight of hand, Ackerman concludes that the New Deal’s legacy contributed more to desegregation in the 1960s and 1970s than it did to creating segregation in the 1930s.

Absent from Uetricht’s and Ackerman’s analysis are the Wagner Act and the Social Security Act, which were both mainstays of the New Deal and included anti-Black provisions: They explicitly excluded rural and domestic workers, and thus excluded most Black workers in the South. Southern Democrats demanded they be excluded in exchange for their support of the New Deal—their white supremacist constituencies were not ready to let go of their superexploited rural and domestic laborers.

What Happened to My Left Magazine?

Why is Jacobin going out of the way to excuse FDR and deny the idea that the New Deal included provisions that deepened and consolidated racial oppression? After years of building a name as a Marxist publication with solid analysis and uncompromising left politics, the wholehearted embrace of social democratic politics and the deep dive into the Sanders campaign has brought about a drastic change in the content Jacobin puts out.

The barrage of articles giving uncritical support to Sanders is combined with a concerted effort to present the senator from Vermont as more left than he actually is. While Sanders increasingly becomes integrated to the Democratic Party, Jacobin still describes him as an independent. While he pledges to continue the “unfinished legacy” of the New Deal, Jacobin claims he laid out a vision for a socialist United States.

But the alterations don’t stop there. There is also an effort to present Sanders’ historical references in a more radical light. This operation was epitomized in the first answer by Ackerman in the podcast:

Was the New Deal socialist?

What follows is a contorted attempt by Ackerman to fit the New Deal, at least partially, into a ‘socialist’ category.

Unfortunately, this is not an isolated shot at distorting historical facts. Other examples include a crude interpretation of Rosa Luxemburg pretty much as a reformist, and, more recently, a facetious attempt to credit Karl Kautsky for the triumphant Russian Revolution. The efforts to recycle the name of  Kautsky serves a concrete political purpose that I have analyzed elsewhere. But let’s investigate further the motives for whitewashing FDR and the New Deal.

Jacobin and the DSA members around it (first organized in the Momentum caucus, later in the short-lived Spring caucus, and now partially represented in the publication The Call) have shown a typically class-reductionist politics when it comes to matters of racial and gender oppression. This politics is expressed in different ways: from pointing to unions as the solution to sexism and racism to portraying the fight against these oppressions as an insidious attempt to “play up identity to reshape working-class demands until they’re neutralized.” In sum, the Jacobin milieu has failed to recognize the centrality of these fights for any socialist project. As Warren Montag and Joseph Serrano explain, “A Left that refuses to fight racism and xenophobia directly, in the here and now, or worse, condemns, in the name of the class struggle, those who have no choice but to resist the oppression they face, can only weaken the very labor movement they claim is at the center of their politics.”

Sanders, for all his truly progressive and pro-working-class proposals, shares this blind spot with the Jacobin current in the DSA. His reluctance to support reparations for slavery is the most visible symptom of this weakness. It makes sense: A plan of social democratic reforms, all badly needed and highly progressive but within the limits of capitalism, cannot really eliminate racism.

Let’s be clear about one thing, though: The socialist left needs to differentiate itself from liberal feminism, from Black capitalism and from other kinds of sectional movements that don’t question the capitalist system and don’t see in capitalist social relations the breeding ground for the continuous reproduction of racism and other oppressions.

Nancy Fraser coined the term “progressive neoliberalism” to describe “an alliance of mainstream currents of new social movements (feminism, anti-racism, multiculturalism, and LGBTQ rights), on the one side, and high-end ‘symbolic’ and service-based business sectors (Wall Street, Silicon Valley, and Hollywood), on the other.” This “symbolism” is often used as well by politicians to attract votes from racialized communities. Thus we see Kamala Harris, a Black senator from California, confront Joe Biden on the question of school busing, yet as attorney general for California, she was directly responsible for the incarceration of tens of thousands of people of color. The same goes for Robert “Beto” O’Rourke’s pandering to Latinx voters with his poor Spanish in the presidential debate.

At a more general level, sectional demands against the oppression of women, or for the economic improvement of Black families, when not based on a working-class perspective, can be easily co-opted by the government, nonprofits and bourgeois politicians. But the reductionist left lumps together the individualist, postmodern use of identity with any fight against racism and sexism. In their eyes, it is all “identity politics.” By doing so, they do a disservice to the socialist left, driving a wedge between movements for Black, women and LGBTQ liberation on one side, and the socialist movement on the other.

Black, Latino and Asian militants have historically provided leadership for the labor and socialist movements. Women and queer people are part of those movement too. Bigotry and discrimination against them are some of the biggest obstacles for organizing among workers. It is not unusual for workers to hold prejudices, which employers and government officials are all too ready to take advantage of and build on, to further divide and weaken the working class. Socialists need to combat this prejudice and those divisions while fighting for both class-wide demands and the elimination of oppressions based on race, gender and sexuality. Class reductionism hurts the labor movement and the socialist movement by obscuring those facts and yielding those fights to liberals, the Democratic Party or the nonprofit industry.

Jacobin magazine’s attempt to whitewash the New Deal represents a new low for the publication. In the last few years, as it has become more involved in the Sanders campaign, Jacobin’s editorial line has moved significantly to the right, and it is, consequently, separating itself from a socialist perspective. Its decision to pursue a political project that is feasible “here and now” is the real reason for painting the New Deal in a rosy (or reddish?) picture, excusing or denying Sanders’ shortcomings and calling just any progressive program “socialist.” The new socialist movement in the United States has higher expectations and deserves a more ambitious horizon to fight for.