Washington Won’t Stop the Wall, But Workers Can

Demonstrating the massive undemocratic powers of the Presidency, Trump declared a state of emergency to build an 8 billion dollar xenophobic wall. The courts and the Democrats won’t stop him, but workers can. 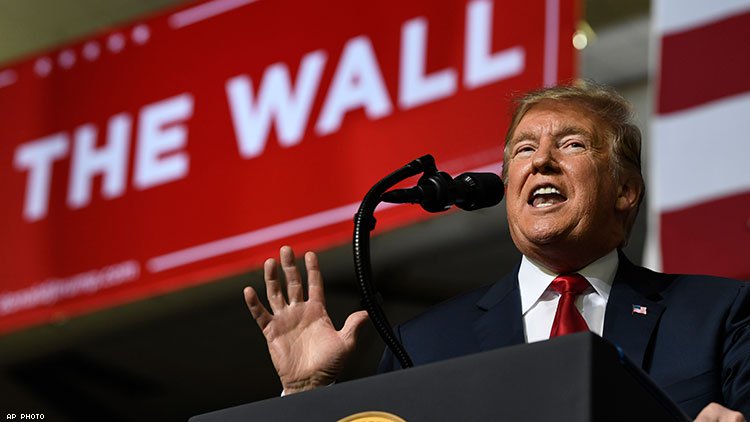 AP Photo in The Advocate.

On February 13, just a day before the next possible government shutdown, Democrats and Republicans came to a deal: $1.375 billion for 55 miles of new border fences, up to 1,200 new border patrol officers, $212 million in border technology and $564 million in further scanning at ports of entry (for more on the bill, read a detailed description here).

At first it seemed that this would be the end of the matter: the Democrats capitulated, the government would not shut down and Trump would get 55 miles of his border wall plus additional funds for border security.

But this compromise was not good enough for Trump. Shortly after the agreement was reported, Sarah Sanders announced that Trump would use his executive powers to declare a state of emergency in order to procure $8 billion in funds for a border wall. This morning, in a press conference in the Rose Garden, Trump made the state of emergency official, claiming it was necessary because “We’re talking about an invasion of our country, with drugs, with human traffickers, with all types of gangs.”

The state of emergency was an idea Trump had been toying with for weeks, arguing over and over that violent criminals are pouring into the country, using the most virulent racist tropes in order to justify further militarization of the U.S. border.

Throughout the 2016 election cycle, Trump held mega rallies, leading the chant: “Build that wall!” He employed similar rhetoric during the midterms last year. And yet, even with two years of a Republican-controlled Congress, Donald Trump was unable to get his wall.

It is the Democrats who are now caving to him. After the longest shutdown in U.S. history, Donald Trump got Democrats to concede to 55 miles of border wall.

Yet Trump refuses to accept even a partial defeat, hoping to energize a xenophobic and anti-establishment electoral base in preparation for the 2020 presidential elections. After all, the border wall was a central campaign promise in the 2016 general election, as well as in the midterms. Despite Republican losses in the midterms, Trump doubled down on his racist positions and is now about to push through an $8 billion border wall by executive fiat.

This moved caused chaos within the Republican party, with members of Congress unsure of how to respond: Vanity Fair called it nothing short of a “melt down”., with some sectors coming out against the declaration, others for it and many waiting to watch it play out in the inevitable court battle.

While Democrats and the U.S. media would have us believe this power grab is unprecedented under our “democracy”, that’s not exactly the case. Presidents have long exercised executive power for drastic actions— just think of Executive Order 9066 which authorized the internment of Japanese Americans in 1942, or more recently, the covert wiretapping and torture organized by the Bush administration. George W. Bush called a state of emergency after 9/11 to deploy reservists to a war in Iraq, which had nothing to do with the World Trade Center attack. Presidents using the massive power available to them to appropriate funds and suspend civil rights is not uncommon.

This means that the law itself allows the executive branch vast powers. The Atlantic argues that the president could, “with the flick of his pen, activate laws allowing him to shut down many kinds of electronic communications inside the United States or freeze Americans’ bank accounts,” as well as deploy the military to suppress internal unrest.

The executive power of the President is one of the most anti-democratic aspects of the American regime. The shut down itself, as well as this executive order, demonstrate the Bonapartist character of the Trump administration.

In this sense, the Trump administration’s attempted coup in Venezuela based on the supposed “dictatorial” powers of Maduro and the “undemocratic” nature of Venezuela is exposed as the deep hypocrisy that it is. In fact, it is the United States that has all sorts of undemocratic powers written into the power of the presidency. Donald Trump himself plans to deploy those powers in a blatant abuse of power, using his executive privileges to make up for the lack of legislative support. Donald Trump and his wall are, in this sense, the apex of undemocratic powers dictating U.S. policies.

Trump could have walked away from the border wall fight with his head held high. After all, only a few weeks after Nancy Pelosi promised that she and Democrats would not give a single penny to a border wall, Trump received $1.375 billion from a House of Representatives controlled by Democrats. This decision came after the longest government shutdown in U.S. history, in which the Republicans, and Trump in particular, were seen as responsible for holding the wages of federal workers hostage while the entire Democratic establishment promised that they would not allocate funds for a border wall.

And yet, when it came to a vote on Friday, the $1.375 billion passed overwhelmingly. In the Democrat-controlled House of Representatives, the bill passed 300-128, with only 19 Democrats, including Alexandria Ocasio Cortez, Ilhan Omar and Rashida Tlaib, voting against it. The Senate voted 83-16, with Bernie Sanders voting for the bill, while Cory Booker, Elizabeth Warren and Kamala Harris voted against it.

At the same time, it is clear that the opposition to the wall is not one based on political principles. Before the shutdown, the Democrats approved a bill with even more fundingfor the wall. As Trump has correctly pointed out several times, the Democrats voted for the Secure Fence Act in 2006 — legislation which was supported by top Democrats including Barack Obama, Chuck Schumer and Hillary Clinton.

The most recent bill passed by a landslide and all the promises of “not one cent” flew out the window. This new bill is especially egregious in that it does not even guarantee backpay for low-wage federal contract workers, including service industry workers and custodians, who lost an entire month’s pay due to the shutdown.

One cannot help but wonder if this sudden “change of heart” by the Democratic Party has to do with the threat of working class sickouts and strikes. After all, it was the threat of those mobilizations that stopped the last shutdown, as even the mainstream press admits. The Guardian ran a story entitled “Air traffic controllers defeated Trump. That’s worker power” and the LA Times said “Workers ended the shutdown. Let’s give them the power to do it even sooner next time.

In the days leading up to this new funding agreement, the flight attendants union called for a general strike in case of a shut down, launching the website General Strike 2019. Even Cher tweeted in support of a general strike — the stage was set for a showdown.

None of this is to say that we should welcome a shutdown; workers have not yet recovered from the last one and most live paycheck to paycheck. Another shutdown would have been yet another assault on the working class. But instead of supporting working class mobilizations to fight back against Trump, the Democrats did exactly what they promised not to do: they voted for a wall (or “fence” as it is written in the funding bill).

There is a State of Emergency

Donald Trump claims we need a wall and that there is a state of emergency, namely “violent criminals” and “traffickers” and drug dealers attempting to cross the border.

We are living in a state of emergency in the U.S. today, but it is not the one Trump claims it is.

Flint, Michigan still does not have clean water.

Even after a strike, California’s student-teacher ratio in the classroom is almost 40 to 1.

In New York City, a federal prison went without heat during a polar vortex produced by the dire effects of climate change.

And yes, there are thousands of migrants waiting in Tijuana, hoping that their asylum papers will come through so that they can come to the U.S. to work, to study, to try to make a living for themselves and their families. For most this will mean low wage work: serving food, cleaning bathrooms, working in fields—the exploitation that enriches American capitalists. These migrants are a product of U.S. imperialism in Latin America: of the coups, the corporations, the land expropriations from indigenous farmers that leave hundreds of thousands deeply impoverished.

Yes, there is a state of emergency, but it is one that Trump will only exacerbate by spending $8 billion on building a border wall.

Whenever the federal government says that there is no money to be spared, whether it be for public healthcare, public university, roads or schools, the working class should call bullshit.

Workers Can Fight Back

The Democrats are sure to ask us to be patient, to trust the courts—the same courts that the Trump administration is packing with right wing judges. But the Democrats’ strategy is a dead end of broken promises, as the border wall struggle has demonstrated.

The way forward became clear at the end of the last government shutdown. Just the rumblings of an airport shutdown, of sickouts and the possibility of a strike, were enough for the Trump administration to backtrack and reopen the government.

Workers finding and using their collective power will be enough to put an end to this state of emergency nonsense and to bar the xenophobic wall.