The Democratic Party and the NGOs want to improve the conditions in the concentration camps. But we want to shut them all down. This is adapted from a speech at a protest against ICE in Aurora, Colorado on July 12. 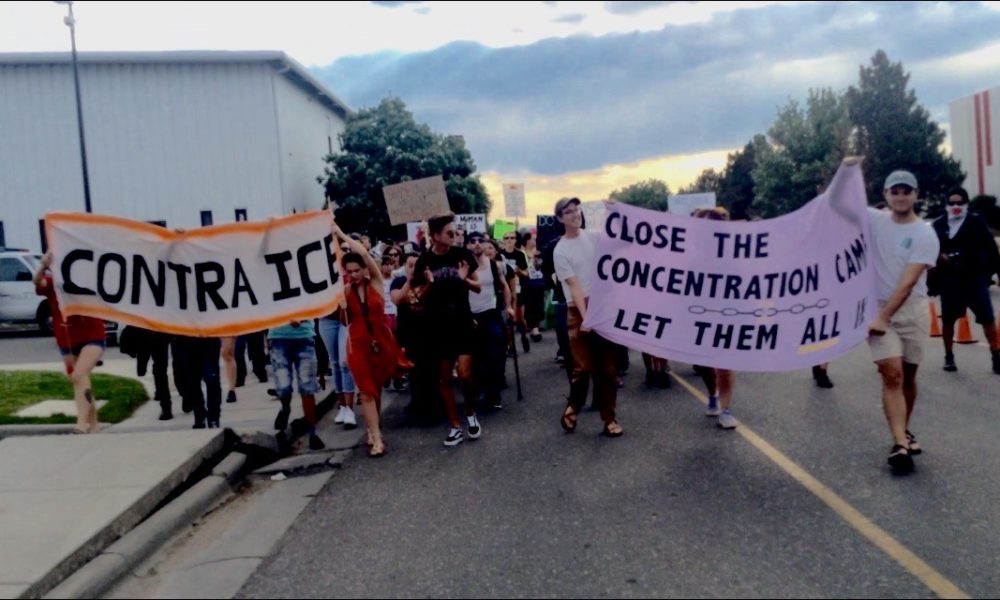 Hi, I’m Richard Folsom. I am a part of the Coalition to Close the Concentration Camps (or CCCC for short). The CCCC was formed a few weeks ago in response to Trump’s policy of placing all those seeking asylum into concentration camps. We voted to organize around the demands of #CloseTheConcentrationCamps and #LetThemAllIn.

To give some history: In 2006, if the Sensenbrenner Bill had passed, it would have become a felony to house undocumented folks. That bill fortunately did not pass due to a movement from below in which millions of people across the country showed their rage. In Denver, 150,000 people joined a demonstration, making it the largest protest in the city’s history.

At the time, the demand was for full legalization. Since then, the demands have shifted rightward. The two ruling parties and the NGO-industrial complex are responsible for this shift. Now the demand is to close the camps and to reunite families. Some NGOs merely want cleaner concentration camps. And even with these limited demands, how are we going to do that? The NGOs and the Democratic Party front groups say we need to vote for their Democratic candidates because, you know… None of this would have happened if a Democrat were in office.

The System Is not “Broken”

Our coalition does not merely want cleaner concentration camps. We do not want families to be united in concentration camps. We do not want families united just to be deported. We want all the concentration camps closed. We want to let all the refugees and migrants in, regardless of whether they are doing it through “legal” means. The U.S. immigration system was never meant to stop migration. It was meant to create a hyper-exploited and isolated section of the U.S. working class that could be paid dirt wages. The law is selectively used to ensure the veneer of a “fair” migration system and keep undocumented workers from organizing against our common exploiters.

We must understand that the U.S. immigration system itself is a concentration camp system. If you are like me and almost half the country, you can see through both the bullshit of both the Republican Party and the Democratic Party. We can see that they do not give a shit about working people domestically or abroad, whether they are documented or undocumented. We all already know about the racism of the Republican Party. They’re not hiding that. What is a little more manipulative about the Democratic Party is that the NGOs provide it with a veneer of “progressivism.”

The underlying problem here is systemic. The system is what allows for figures like Governor Jared Polis to (i) allow the O&G industry to collaborate with local governments to bring fracking into our community, while simultaneously saying (ii) that ICE is a legitimate agency and that local governments should not mess with their operations. While racism is manifested in various ways through slurs, physical violence, etc., this here is blatant systemic racism.

Recently, the Democrats gave up all demands for even minimum oversight of ICE when they voted  for a Republican spending bill which essentially handed 4.6 billion dollars to ICE and CBP. The Democratic Party left the question of how all that money was to be used to the Trump administration. You can reach your own conclusions about what that means.

We now know that the system we live in is not “broken”; the system is fixed and designed to work the way it is working. None of this is even taking into account U.S. imperialist foreign policy, or its long history of concentration camps.

What Needs to Happen

We are joining thousands of folks across the country in the Coalition to Close Concentration Camps. We want to kick off this national campaign to close the camps and let them all in. We need our own grassroots organizations, independent of both the ruling parties and the NGOs. Power won’t come from ingratiating ourselves with the Democrats. Our own working-class power must be built brick by brick.

We are building a new national network that can actually build a movement from below, with a long-term vision that includes a strategy for confronting all the institutions, politicians, and profiteers who stand in our way. This work will not happen overnight, and I hope a lot of you will catch us after the march to help build the independent political power that is necessary to close the concentration camps and let them all in.

Richard is an activist with the International Socialist Collective in Boulder, Colorado.