“We Had Eight Bereavements in One Day”: Teaching Theatre in a Pandemic

A New Jersey theatre teacher discusses the inequities his low income students faced during online learning, how it felt to receive eight bereavement notices in one day, and his concerns about returning to school in the fall. If you are an educator or student who would like to share your experience with COVID and/or school re-openings submit to [email protected] 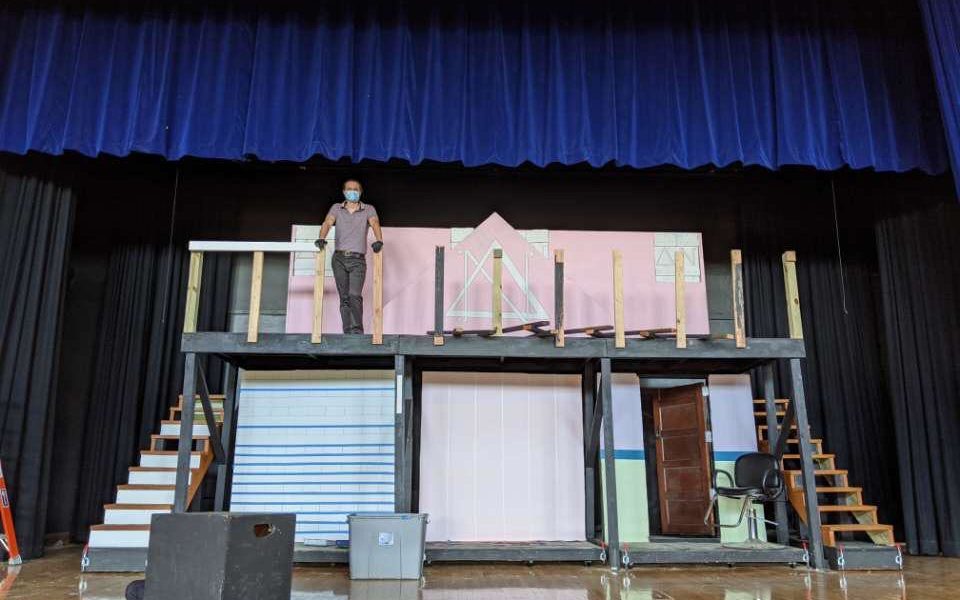 David pictured above on his set for Legally Blond

As part of our ongoing series of educator perspectives on schools reopening, Left Voice spoke to David, a high school theatre teacher in northern New Jersey. This interview has been edited for length and clarity.

LV: When did the coronavirus first hit your area? How bad was it and how did people in your area respond?

David: New York/New Jersey were two of the first states really hit. We got hit pretty hard. They started putting out disposable wipes and hand sanitizer for about a week before they ended up closing. It ended up being pretty bad, especially for a lot of the students at my school. It’s an urban area, so we know that places with higher population density of course got hit harder. I had quite a few students who, over the course of the semester, let me know they lost a family member. We were getting bereavement notices every day, but there was one day when we had 8 bereavement notices for family members of staff members. In one day. And that was…that was scary. That was when I wasn’t going outside at all.

LV: What was your transition to online learning like?

David: I want to say March 13 was my last day at school. Friday the 13th. Two days before, I was one of the few people who actually knew we were closing down. They were cancelling my musical, so they had to let me know in order to get all that stuff handled. They actually made me rehearse for two days with the kids in case we ended up not shutting down. It was the weirdest two days of my life. Being there like, “Well, this is for nothing.”

We were lucky. My school was the only one in the district that had 1:1 Chromebooks for everyone in the school. We had been [over the previous few months] releasing them to one grade level at a time, and then we did 10th to 6th grade all in two days.

What we ended up doing was moving our spring break forward 3 weeks — I think with the hope that we were gonna go back. But then about on day three, the mayor and everybody said that kids were not social distancing, sort of defeating the whole purpose of shutting down school.We had 48 hours’ notice of “Oh hey, by the way, you’re starting virtual school in 2 days, not in 2.5 weeks like we thought.” They wrote up these plans, and my curriculum was like 3 sentences. “Kids will create a theatre project.” Our arts coordinator had to get 50 courses [of curriculum and guidance] out in two days, though, so I completely understand.

David: Everything was over Google Classroom. We weren’t actually allowed to video chat until May. Once that started, it ended up being almost just reading comprehension. For example, in my musical theatre class, we did Rent, In the Heights, and Hadestown, and studied them and did very simple short answer tests. But I started with too high expectations. These kids were overwhelmed and trying to transition to virtual learning. They had nine essentially new courses. They were scared. They may not have been used to learning at home. So, I realized that I was not being an effective teacher, and I made it simpler. You know, I’d rather them learn something than nothing.

LV: How did the students end up adapting?

David: Some kids thrived. Some of the kids certainly set their alarm and got their work done by noon and were just chilling. But I would say a third of the kids failed that fourth marking period. A lot of the kids just ended up giving up. The district worked very hard to get all these mobile wifi hotspots out to everybody because a lot of the kids don’t have wifi or any internet access. It took awhile to get it underway. Some of the kids had to do it with pencil and paper and send you pictures over Remind [a secure texting app designed for communications between teachers and students], and then you had to grade it that way.

Once we started doing video chats, the core group of 15-20, you know, “Theatre Kids,” showed up every day. I think the hardest part was that a lot of them ended up having a bunch of siblings share one Chromebook. The older siblings had to help the rest of them. Some teachers were like, “You have to show up to this Google Meet at this time,” and I just feel like that was unethical to ask of the kids in this sort of situation. Many of them are being asked to essentially be parents. I didn’t feel right asking a kid who told me two days ago her father died to do things like that.

But overall, I think the kids adapted well. None of them wanted to perform over the video, though. That was one thing that they just did not want. They don’t like speaking over it. They want their camera off. I think that’s high schoolers. I know a lot of [my wife’s] elementary schoolers loved it. But the high schoolers, not so much. And if their Chromebooks aren’t working, you can’t really send it into technology services.

It all kinda brought me back to when De Blasio said that we can’t close schools because how are we going to feed kids? My district was in a very similar position with a lot of low income students. We ended up doing home delivery service. I’m very glad that that was done.

LV: How well do you think those programs worked? Were all the kids getting reached?

David: I know the lunch program was working great. The school’s policy was, “Even if some people are abusing the system, [it’s because] these people need to eat. No one’s selling these fucking ham sandwiches out on the black market.” If [the food] was going to a kid, even if some people were lying about how many kids they had, then they were on the side of that. And they’re continuing it through the summer, which is awesome.

LV: What’s happening in your district for the fall, if you know?

David: We don’t know. The rumor is virtual through the rest of the year, but that’s just coming down eight different layers of the beanstalk. But one of the things they’re really worried about for after school productions and things like that is how it would be insensitive, you know, holding these large productions and crowding people into an auditorium in a community that faced so much loss. I don’t know about people above my principal and my arts coordinator, but I know they’re taking it very seriously. I don’t think they want to come back. I know there are some schools where the middle school bathrooms didn’t have soap as it was. And how do you expect them to supply soap now, when their financial burden has increased, and their tax revenue has decreased? I don’t think there’s any safe way to do it right now. I don’t think we’re going back.1

LV: If you have to go in, what protections are there for if you get sick or exposed?

David: If I remember correctly, if we feel symptoms, we get tested, and they isolate us in quarantine. I don’t remember what the plan said if one of my students is a confirmed case. I don’t know how all teachers’ unions are, but we have a very generous sick leave policy. If you get something that is contagious, they encourage teachers to stay out of school to protect the students. For example, with shingles or chickenpox, they want you to stay out of school, and they don’t charge you sick days for that.

LV: What are your biggest concerns going into the fall?

David: I think my biggest concern is just keeping people around me safe. Going out every day in that situation, it really changes how I have to behave. Going to a family dinner with [my wife’s] 77 year old grandmother is not as easy of a decision as it used to be, if I’m going out five days a week.

I think another concern is, being in an urban district, we typically don’t have the same resources or funds as other schools. You see those great performing arts videos of those districts that are doing this great work virtually. But it took me two and a half months to be even allowed to video chat.

I’m also trying to figure out a way to make acting classes work. I don’t think learning the art of acting is worth risking your life. So how do we adjust how we do things on stage, or do things virtually? If we do end up going back, I know my first lesson is going to be mask articulation. I know that for sure. Or, even if it’s virtual, I’m gonna have the kids bring their mask and teach them how to articulate their words through it. I don’t even know if I can do it, but I’m gonna learn. I think it’s a valuable lesson.

LV: Is there anything you want to talk about that I haven’t asked about?

David: What I really wish would happen is, I wish we would construct outdoor classrooms. Months ago, I was looking at a picture from Norway— Norway is not correct—  where they had outdoor classrooms, and how aesthetically beautiful it was, wrapped into nature. But it’s never going to happen here.