We Have Nothing to Lose But Our Chains: Commemorate a Socialist Black History Month with Left Voice

Left Voice invites you to write an article or make art for Socialist Black History Month. Help us highlight Black oppression under capitalism and the struggle against it. 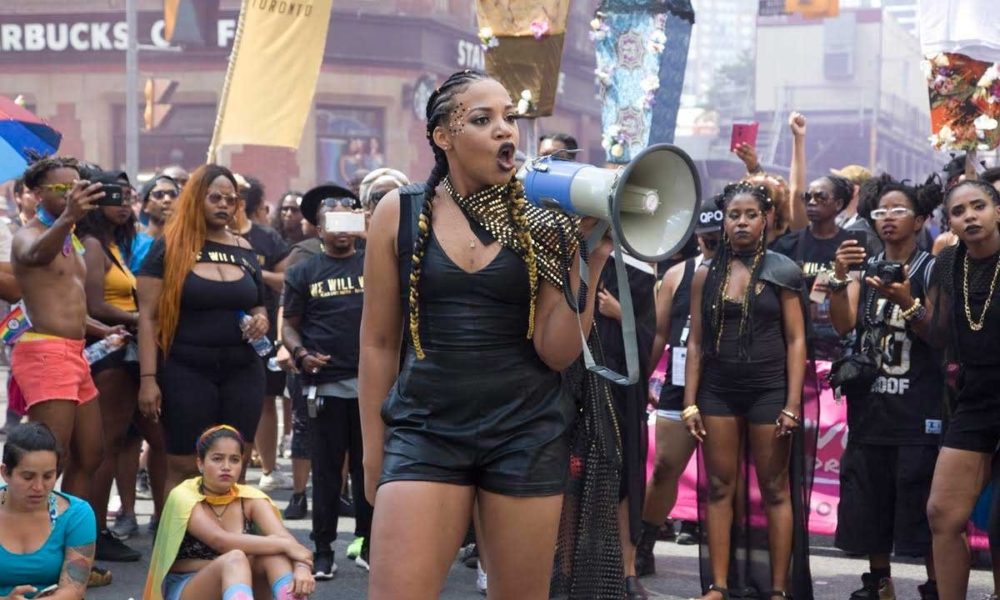 Photo by Ethan Eisenberg of protesters blocking Toronto Pride Parade and speaking out against police violence against Black people.

“We have nothing to lose but our chains”: the last line from the Assata Shakur pledge was taken up by the struggles in Ferguson, Baltimore, and Black Lives Matter protests. It is a call for daring action and solidarity. Shakur’s call originated from the Communist Manifesto written by Karl Marx in 1848. The continuity between their words is a demonstration of the important fact that the struggle for socialism is inextricably linked to the struggle against racism and for Black liberation. With this in mind, we invite you to write, research, translate, or otherwise collaborate with Left Voice this Black History Month (Write to us at [email protected])

In Capital, Karl Marx says “If money, according to Augier, ‘comes into the world with a congenital blood-stain on one cheek,’ capital comes dripping from head to foot, from every pore, with blood and dirt.”

Nowhere is this congenital blood stain dripping from every pore more clear than in the way that capitalism emerged from the African slave trade. It was the most brutal process of kidnapping African people, bringing them half way across the world to work on plantations where they were ruthlessly beaten and where sexual assault was systematic. The ideology of white supremacy allowed Black people to be treated as property and suffer untold horrors under the cover of law and for the benefit of the wealthy.

US capitalism was born from this system of unpaid labor: chattel slavery. Slavery has its imprint on American democracy—like the electoral college that is still in place today. Statues to slave owners still stand around the country—though now activists have begun to knock them down. The descendents of slave owners still hold onto their ancestors’ property and maintain immense wealth that was built on the backs of slaves.

Furthermore, the colonial relationship between Europe and African countries that produced the slave trade has today developed into an imperialist one with nominal independence for African nations under puppet governments that serve European and U.S. capital.

And the racism that was the centerpiece of justifying this system of slavery continues to provide mass profits for capitalists: the prison industrial complex provides semi-slave labor and disproportionally incarcerates Black folks, lower wages are paid to Black workers, landlords overcharge Black families for shoddy housing and create homelessness for thousands of others. In every facet of society, from birth to death, the darker a person is the worse they are treated.

The docile Negro is a myth. Slaves on slave ships jumped overboard, went on vast hunger strikes, attacked the crews. There are records of slaves overcoming the crew and taking the ship into harbor, a feat of tremendous revolutionary daring. In British Guiana during the eighteenth century the Negro slaves revolted, seized the Dutch colony, and held it for years. They withdrew to the interior, forced the whites to sign a treaty of peace, and have remained free to this day. Every West Indian colony, particularly Jamaica and San Domingo and Cuba, the largest islands, had its settlements of maroons, bold Negroes who had fled into the wilds and organized themselves to defend their freedom. In Jamaica the British government, after vainly trying to suppress them, accepted their existence by treaties of peace, scrupulously observed by both sides over many years, and then broken by British treachery. In America the Negroes made nearly 150 distinct revolts against slavery. The only place where Negroes did not revolt is in the pages of capitalist historians.

Indeed, Black history is one of heroic resistance, pushed forward by figures who became famous and some who did not. It is a history of resistance of those who won important reforms and many more who were incarcerated or died fighting.

Some believe that the answer to fighting racial oppression is to become oppressors, i.e. capitalists, ourselves. Examples of Oprah Winfrey, Jay -Z, Obama and others are touted to communities that continue to suffer from racism, capitalism and imperialism. However, as socialists, we know that the systemic racism won’t be dismantled by putting a Black figurehead who sends the National Guard to suppress Black Lives Matter protests or to bomb Somalia and Libya with drones. A capitalist system means only a few Black capitalists become rich while the rest of us live in poverty. Capitalism was built from slave labor and racism is a weapon of the capitalists. We continue to fight both capitalism and racism.

But there is another sector of folks in the Black community who know that, as Jamal Jones once said, “representation ain’t liberation.” Much of this sector’s legacy and contributions have been ignored and denied: Black folks who took up the mantle of socialism, seeing the inextricable connection between capitalist exploitation and racism.  As Fred Hampton explained, “We say we’re not going to fight capitalism with black capitalism, but we’re going to fight it with socialism.” Left Voice is fighting to highlight and strengthen this Black revolutionary tradition.

Leon Trotsky echoed this sentiment is his revisiting of the Communist Manifesto where he wrote:

The movement of the colored races against their imperialist oppressors is one of the most important and powerful movements against the existing order and therefore calls for the complete, unconditional, and unlimited support on the part of the proletariat of the white race.

During Black History Month, Left Voice aims to develop a socialist analysis of the oppression of Black people, from housing to prisons to policing. We want to offer a history of Black resistance that draws a line of continuity between historical and current oppression. In particular, we want to highlight the history of socialists who have fought for Black rights, socialism and Black liberation. We will examine the legacy of Black feminism, which fought against racism and patriarchy and questioned lesbian seperatism, racism within the feminist movement, and patriarchy within the Black community. If you would like to write for Socialist Black History month, please pitch us a topic by writing to Left Voice: [email protected].

Left Voice is confident that in the class struggles to come and in the struggle for socialism, Black people and Black issues will be at the forefront. We echo CLR James when he said, “In Africa, in America, in the West Indies, on a national and international scale, the millions of Negroes will raise their heads, rise up from their knees, and write some of the most massive and brilliant chapters in the history of revolutionary socialism.”

We have nothing to lose but our chains!