We’ll Take All the Plazas

Around 6 thousand people marched with the PTS to commemorate the 40th anniversary of the military coup. 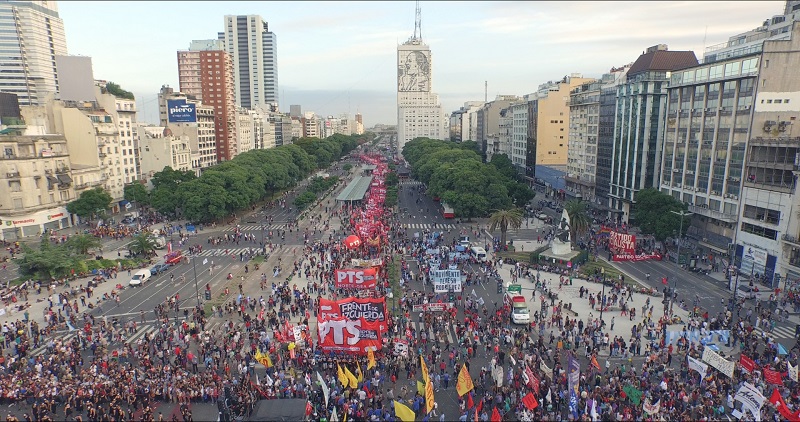 Approaching the central meet-up point, my jaw dropped as I realized that the buses lined up on the streets for blocks and blocks were all rented by protesters, organizations. People who were there to march with us. I stretched my sights a little further and saw up ahead, a forest of tall red flags swaying.

We swiveled our heads to see the folks from Zona Norte filling the street. Zona Norte, the industrial heart of Buenos Aires Province. They were about a thousand strong – workers who’ve led some of the most audacious, combative, and bad ass struggles against foreign and home-grown capitalists taking place anywhere in the country – maybe throughout the continent. At the head of the column were workers and kids holding hands and grasping the banner, “Expropriate Donnelley Now!”

But this was just a fraction of the total forces that came together today under the PTS banner.

The column of over five thousand drumming, chanting, flag-waving, mate-sipping Trotskyist militants, aspirants, and supporters almost circled the entire square at Congreso Plaza, where we gathered before heading toward the Plaza de Mayo.

The PTS youth had a lively band that went on for the course of the 5-hour demonstration (no small feat), leading the crowd in “We’ll take all the plazas and send Obama running home!” and “30,000 detained and disappeared, PRESENTE!”

Remembering the fighters, the murdered, kidnapped. The disappeared. Lost in the crowd, unaware of north south east west. Surrounded by a sea of comrades.