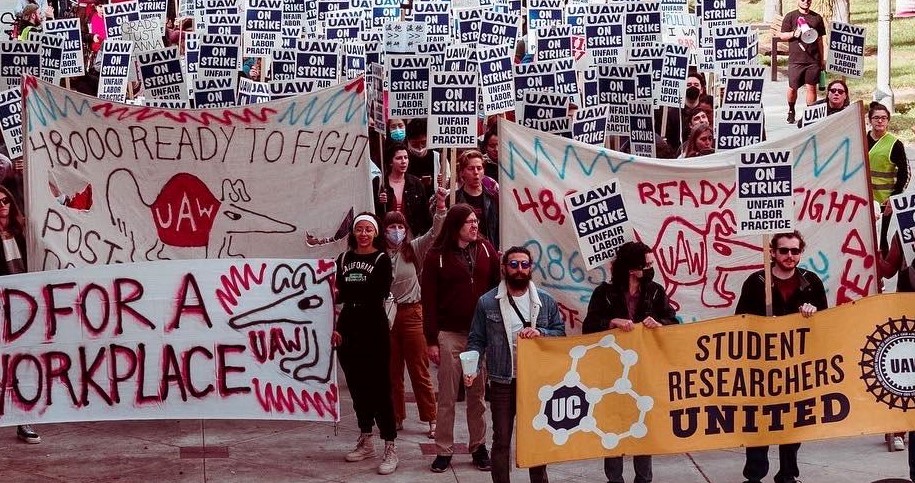 On the first day of the strike, my laptop fell and broke on the picket line. When a friend and strike captain drove me to pick it up, we chatted about some questionable moves that more conservative members of the UAW 2865 bargaining team had made. My friend and I realized that we are both Aries star signs, and agreed that the worst insult we could imagine anyone calling us would be “coward.” I was reminded of this conversation on the night of November 30, 2022, while I watched a razor-thin majority of my bargaining team gut half of the contract demands that we had promised to members.

The bargaining process to this point has been long and fraught. UAW 2865, the second-largest UAW local in the nation, representing 19,000 TAs, readers, and tutors at the University of California (UC), has been in bargaining with the University of California since March 2, 2022. SRU-UAW, the newly-formed union representing graduate student researchers, entered bargaining not long after. Most of the substantial contract demands of 2865 and SRU have been uniform, to ensure the same contract for graduate student workers in each unit. UC has been intractable through this whole process, making only 2% worth of movement from their original compensation proposal to us, and offering no concessions at all on most other parts of the contract. But as the night of November 30 revealed, the UC doesn’t even need a bargaining team. We do just fine bargaining against ourselves.

Late November 30, members of the SR and 2865 bargaining teams voted to adopt a package to the UC that features the following major concessions:

This proposal was presented at a joint 2865 and SRU Bargaining Team meeting for adoption without warning. In addition to the joint-unit package, the 2865 team voted to drop our demand for disabled workers to receive access needs without having to provide medical documentation.

Perhaps most shocking was the rationale offered for the decision to adopt a $43k wages demand, which was moved up from $42k as a “friendly amendment.” This came as a way to “alleviate concerns” after more than 2,000 people signed a petition against a move to $42k in a single afternoon and evening. News of the $42,000 proposal had begun circulating among rank and file workers across the ten UC campuses. Workers quickly mobilized to write and circulate this petition. Our rank and file membership were horrified by the $12,000 drop in our demands. To have the majority of the Bargaining Teams respond to this swift and horrified reaction by raising $42,000 to $43,000 was a callous disregard for the nature of these concerns.

This move comes in the third week of our strike, during which time the UC has made no movement towards us. On June 17, the UC presented us with a compensation offer of a 5% immediate wage increase and 3% every year thereafter for the life of the contract. We rejected this as unacceptable to address our cost-of-living needs. On October 12, the UC made us a new compensation offer, this time with a 7% immediate increase and 3% every year thereafter. This is still unacceptable. The UC has not moved at all from this position, let alone moved in a way that would warrant a $12,000 concession.

In fact, twenty-four hours before the 2865 and SRU Bargaining Teams took this vote, the UC presented a wages proposal to 2865 identical to their pre-strike November 9 proposal, while moving upwards by 1.5% for SRU. Since the strike began, the university has presented 2865 with no counters on wages, childcare, or non-resident supplemental tuition (NRST) that comes even close to the union’s original proposals.

All reps, two per team per campus, from Santa Cruz, Santa Barbara, Merced, and Riverside, voted against every item on the agenda, as well as one 2865 rep from San Diego and one SRU rep from UCLA. All proposed amendments during last night’s meeting, including a $48,000 base wage compromise, an additional $46,5000 base wage compromise, and a compromise to retain 50% dependent healthcare coverage, were voted down.

Upon adoption of this package, the majority of both Bargaining Teams immediately moved to pass it to the University, giving 10 minutes notice to both other Bargaining Team members and to membership, at 10pm. Rank and file members swiftly disseminated the bargaining zoom link. Within a single minute, the room reached its 500 person limit. Overflow rooms opened up to accommodate hundreds more. The opposition to this move, as expressed in caucus by rank and file, was overwhelming.

UC ended the session by telling us that they were “disappointed that there wasn’t further movement” and that our package was not yet “realistic” enough to get us back to work. They told us to expect a return package the following day. So, all of that movement, all of those dramatics, all of the betrayal of the interest of members, was for nothing. We will, I’m sure, compromise much further on wages before all this is over, and leave our members rent burdened.

I can’t begin to explain the horror I felt watching this unfold. At one point, I legitimately felt dizzy, and had I not been seated, I’m sure I would have fainted. One by one, on votes that were consistently split 10-9 on the 2865 team, we sold out promises we’ve made to the people who elected us.

The conservative bloc of the two bargaining teams forced this vote from a place of fear, from a place of cowardice. They hold a misguided belief that the number of bodies on picket lines is the only metric of power, and refuse to poll to find out how many members are engaged in an actual work stoppage. There is a difference, of course, between a strike in which workers are withholding labor, and hanging out at a picket line. We will never know the real numbers of people who are withholding labor, because the majority vote on the bargaining teams refuses to poll membership. They are frantic to end this strike for fear of losing control of it. The very premise of this is misguided: we never had control of the strike to begin with. We do not control the strike. We do not control our members.

The United Auto Workers staff have already done what they came here to do with this contract campaign. They get the glory of having led the biggest strike in higher education. They get 17,000 more dues-paying members with the recognition of SRU-UAW. Beyond that, they do not care what kind of contract we get, and they’d love to stop spending down the multi-million dollar strike fund. The staff, and the conservative majority of both teams, are choosing to abandon the fight. They are trapped in a culture of fear of their own making. They are choosing to act as cowards.

If their cowardice continues unchecked, membership will have no choice but to vote against ratification of a bad contract.

Editor’s Note: Readers closely following the UC strike may notice that some language in this document can also be found in other documents written by members of the UAW Local 2865 bargaining team. These documents as well as this article were collaboratively written, and passages have been shared and reproduced with the knowledge and consent of all parties.