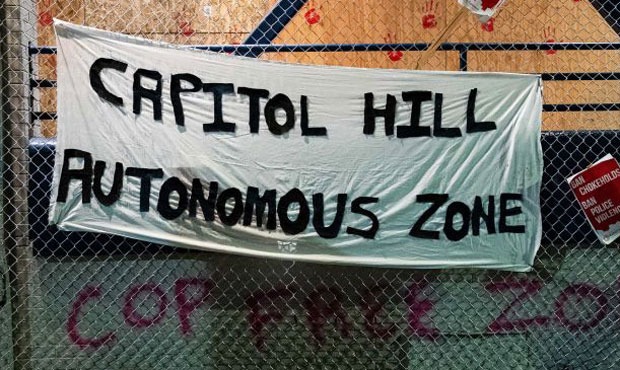 At least 750 cities worldwide have erupted into protests since police murdered George Floyd on May 26. Since then, local governments have been trying to subdue the social unrest. The series of protests in Seattle, Washington gained wider attention after police maced a 9 year old girl, used tear gas on protestors only two days into a 30-day tear gas ban, and have repeatedly destroyed protestors’ medical supplies. More recently, Seattle is making national headlines again now that a group of anarchists have established the “Capitol Hill Autonomous Zone” in an area abandoned by the Seattle Police Department.

How did Seattle get here?

Protests in Seattle began on May 29, three days after the people of Minneapolis took to the streets. They grew rapidly over the following days, as did the violence of the police response. On May 30, one SPD officer maced a 9 year old girl, the aftermath of which was caught on video, and another officer was caught on video restraining a protestor by putting his knee on the protestor’s neck, the exact same tactic used to kill George Floyd. The police continued to use tear gas, pepper spray, and other “less-lethal” attacks, while protesters began using umbrellas to shield themselves from the chemical weapons. The police also confiscated a pink umbrella from one protester, which led to the widespread adoption of the pink umbrella as a symbol of the movement within the city.

On June 5, the mayor of Seattle, Jenny Durkan, issued a 30-day ban on tear gas. Two days later, on June 7, the police ignored the ban and fired a “barrage” of tear gas and flashbangs on the crowd without provocation. The following day, three city council members began calling on the mayor to resign, and the police began removing belongings from the East Precinct police station, eventually boarding up the windows and abandoning the building entirely.

Soon after, protesters repurposed the police barricades to establish a perimeter around six blocks of the surrounding area to form the Capitol Hill Autonomous Zone (CHAZ). People on foot are able to move freely, but the barricades prevent cars from accessing the area — an important safety precaution, given the multiple recent incidents in Seattle and around the U.S. of police, white supremacists, and other counter-protesters driving their cars into crowds of people.

What is the CHAZ?

The Capitol Hill Autonomous Zone was established by a group of loosely-affiliated Seattle anarchists around the former Eastern Precinct of the Seattle Police Department (which graffiti has renamed the Seattle People’s Department). It contains a memorial to George Floyd, stations with free food, water, and medical supplies, and spaces for the community to organize, have political discussions, and rest. A sign on one of the barricades now reads, “Welcome to the Free Capitol Hill.” Some people have set up tents and are sleeping in the Zone, and protesters are also giving supplies to homeless people who stay nearby. Currently, the Seattle government is not sending police to re-take the space, and some municipal agencies have been instructed to provide resources such as portable restrooms.

The Capitol Hill Autonomous Zone has released a list of 30 demands, drawn from the speeches of Black organizers made on June 8 after the Zone was first established. The first 19 demands center around the justice system, including the abolition of the police and of prisons, as well as demands for the transition period between now and full abolition. The remaining demands address economic issues (like rent control and free college), provisions to reduce racial disparities in education and healthcare, and a democratized system for local elections that will enable full working class participation.

On June 9, city councilwoman Kshama Sawant used her key to enable them to temporarily occupy City Hall. Sawant, a member of Socialist Alternative, is one of the city councilmembers calling for the mayor to resign. Although Sawant seems to be on positive terms with the organizers of the CHAZ, she has stopped short of calling for full police abolition and even voted in favor of appointing Seattle’s current police chief, Carmen Best, who is responsible for the police force committing all of the violence described above. The position of police chief is inherently an oppressive tool of capitalism. Currently, organizers within the autonomous zone are calling for additional donations of food and other supplies to help support the occupants and local community members in need.

The autonomous zone is one of the most radical projects coming out of the current uprising — an attempt at a communal and democratic occupation in order to fight the system of racist police brutality, as well as against the years of austerity that have been particularly brutal to the Black working class. Regardless of how the situation in Seattle progresses from here, this example is opening up broader discussions and questions about alternate forms systems and governance in the United States.

If you are in Seattle and participating in this movement, we want to hear from you. Email us at [email protected]