“We’re being treated unfairly and we’re doing something about it”: Amazon Workers Walk Out

On Wednesday, dozens of Amazon workers walked out at the DIL3 facility in Gage’s Park and DLN2 warehouses in Cicero in Chicago. They are demanding a wage increase and safer working conditions. The walkout took place during the Christmas rush, maximizing the impact on Amazon. 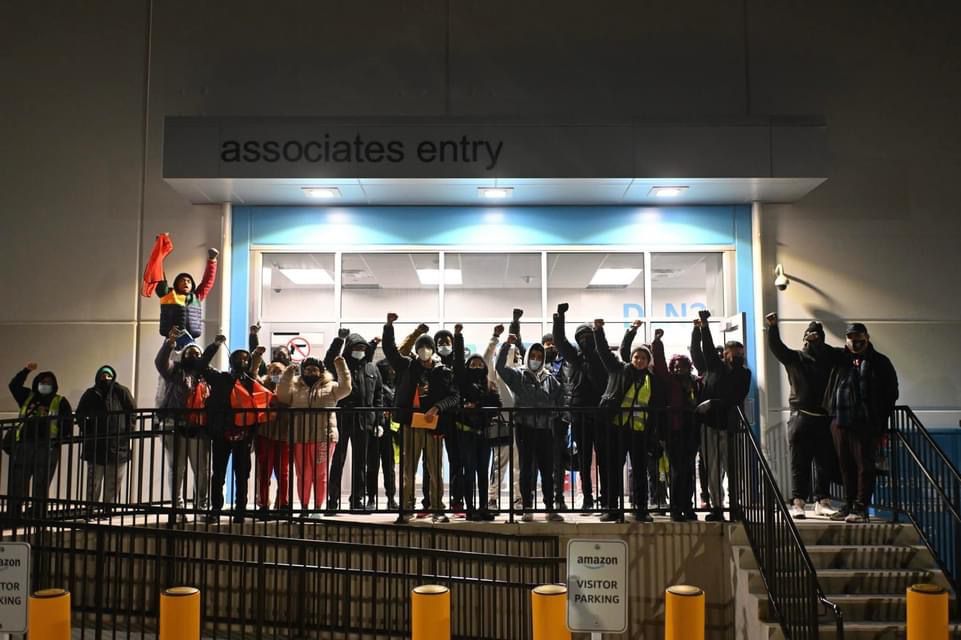 On Wednesday, dozens of Amazon workers walked out at the DIL3 facility in Gage’s Park and DLN2 warehouses in Cicero in Chicago. They are demanding a wage increase and safer working conditions. The walkout took place during the Christmas rush, maximizing the impact on Amazon.

The action was organized by Amazonians United, a labor network that organizes at Amazon throughout the country. “We’ve been underpaid, overworked, and also unsafely staffed going on months now,” said Ted Miin, an Amazon worker and Amazonians United member at the DIL3 delivery station. ​“We’ve tried to raise these issues with management, but they’ve effectively dismissed our concerns.”

At Chicago’s Gage Park warehouse, 65 out of an estimated 100 workers signed onto a petition demanding a $3‑per-hour raise and safe staffing at the warehouse. They haven’t heard back from management about their demands. ​“They’re not taking us seriously, so we’re walking out,” Miin said.

At a warehouse in Cicero, workers also walked out because workers have not received overtime pay after working the Thanksgiving holiday and permanent workers have been demoted to temporary workers.

One worker explained, “We’re willing to go back to work. We will work hard to make sure everyone gets their Christmas gifts, everyone gets their packages. But we just want to be treated fairly…This is the busiest month of the year. If Amazon can meet our demands, treat us right like human beings, we will make everybody’s Christmas a beautiful one.”

This happens while the discontent towards Amazon’s working conditions continues to grow, especially after the death of 6 Amazon workers at a warehouse during the tornado in Illinois.

It also came to light that on November 28 and 29, two Amazon workers in Bessemer, Alabama, died within hours. Amazon worker Isaiah Thomas told More Perfect Union that one of them died of a stroke on the 28th, after going to HR and being denied leave and threatening to be fired despite feeling sick. On the 29th another Amazon worker died on his way to the hospital. According to Amazon workers, six of them have already died this year at the Bessemer Amazon facility.

In the midst of these criticisms, the National Labor Relations Board reached a nationwide agreement with Amazon to “make easier” the process of organizing in their facilities. This settlement will affect more than 750 thousand workers. The settlement means that employees working on union activities should be allowed access to workplace facilities at the end of their shifts, as well as to the parking lot, as many workers reported being kicked out after their shifts ended. Amazon must send notices informing workers of their rights to current and past warehouse workers (since March 22).

We know it will never be easy for workers to fight for the right to have their union. The unionization efforts and the fight for improving working conditions will depend on the strength and organizing of the rank-and-file workers across the country. The walkout by Amazon workers in Chicago is a key example for Amazon workers all over the country.

“We know we’re being treated unfairly, and we’re doing something about it,” Miin explained, hoping other workers would follow Amazonian United’s example. ​“If we can in any way be encouragement or inspiration for others, we want our coworkers and all workers to see that we can get organized, we can fight back — and that when we fight, we win.”