Mexican President Andrés Manuel López Obrador (AMLO) ran as a progressive who would stand up to Donald Trump. He has spent his presidency betraying those promises. But the meeting last week was nonetheless a low point. We need an alliance between the Mexican working class and the Black community in the United States in the fight against racism. 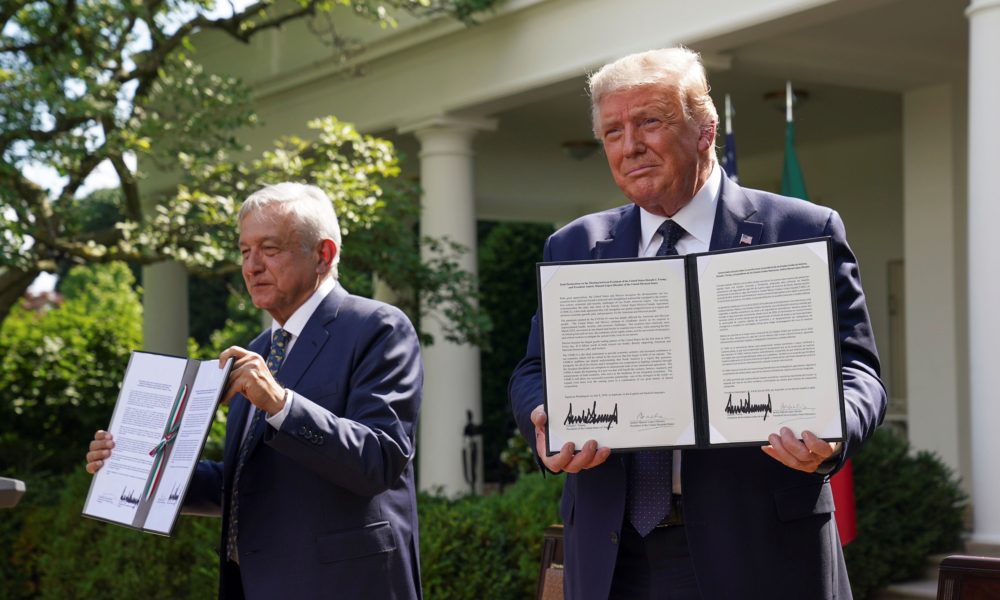 Mexican President Andrés Manuel López Obrador (AMLO) won the 2018 Mexcan election by a landslide, promising to support the poor and working class, and to stand up to U.S. interests.

His betrayal of all of that was never clearer than last Wednesday, when he met with perhaps the most vocally anti-Mexican president in U.S. history at the White House. Donald Trump has spent much of his presidency calling Mexicans criminals, blackmailing Mexico with huge tariffs, and closing the border. López Obrador refused the invitation to meet with Mexican immigrants in the United States — he couldn’t, after all, offend his imperialist boss.

Throughout his term as president, López Obrador has implemented Trump’s brutal policies at the border, creating a new police force to serve as a border patrol for the United States. As The New York Times puts it, “Mexico has transformed itself into one of the United States’ most powerful tools to halt migration.” These policies cost the lives of people who, facing a pandemic and an economic crisis, are faced with so much misery and violence in their countries that they decide to undertake the increasingly dangerous journey.

The meeting was meant to celebrate the new trade agreement between the U.S., Mexico, and Canada, the USMCA. But Justin Trudeau decided to skip the event, staying in Canada. Only López Obrador gave Trump the photo op he wanted. At the White House press conference, López Obrador exchanged compliments with the leader of American imperialism — whose policies are killing people during the pandemic, who supports repression against protesters, who locks children up in cages, and who rules a nation that stole half of Mexico’s territory in 1848 and continues to oppress Mexico.

“With everything that we have accomplished, the potential for the future of the United States and Mexico is unlimited,” Trump added, showing his cynicism and brazenness by “thanking” the more than 30 million Mexican Americans living in the United States. “They are hardworking, incredible people,” he said. And Trump should know: he has long exploited migrant workers in his hotels and real estate ventures. But he did not neglect to mention his anti-immigrant policies:

We’re forging critical partnerships across the Western Hemisphere to combat the cartels and the smugglers and to ensure safe, humane, and lawful migration, and we’ve been helped greatly by Mexico on creating record numbers in a positive sense on our southern border.

At the White House press conference, López Obrador spoke next, in a humiliating speech that seemed to “forgive and forget” U.S. imperialism: “Instead of distancing ourselves, we have chosen to travel together, putting aside differences with dialogue and mutual respect.”

He continued with his litany of praise for the man who has derided Mexico time and time again since his first election campaign:

We have received from you, President Trump, understanding and respect. Some people thought that our ideological differences would inevitably lead to confrontations. Fortunately, this has not been the case. And I believe that, towards the future, there will be no motive or need to break our very good political relationship or the friendship between our two administrations. (…)

You have not tried to treat us as a colony; on the contrary, you have honored our condition as an independent nation. That’s why I’m here to express to the people of the United States that their President has behaved with us with kindness and respect. You have treated us just as what we are: a country and a dignified people; a free, democratic, and sovereign people. Long live the friendship of our two nations.

López Obrador seems to have forgotten that Trump spent last year attempting to blackmail Mexico, threatening high tariffs if Mexico did not agree to Trump’s conditions in the USMCA negotiations, or to play the role of U.S. border patrol.

Bad for the Working Class

The USMCA, or NAFTA 2.0, is a trade deal between the United States, Canada, and Mexico. While Trump argued that NAFTA was a horrible deal, the USMCA is quite similar — although more favorable to the United States. It maintains the system in which goods can travel across North America without tariffs, while people are heavily policed. Both Democrats and Republicans voted in favor of this treaty, with a few exceptions such as Bernie Sanders.

The deal does not mention climate change or have strong environmental standards. Further, it weakens Mexican labor rights by imposing anti-worker reforms, as well as favoring U.S.-based manufacturers.

This humiliation of Mexico will only help Trump’s reelection campaign. Trump’s poll numbers are falling, but López Obrador helped him bolster his public image. The celebration of the UMSCA and of Trump hides the multiple crises of U.S. imperialism — as the Covid-19 has already infected 3 million people, workers are struggling against unsafe working conditions and structural racism.

Besides the roles of master and servant, something else unites Trump and López Obrador: their persistent attempts to minimize the severity of the pandemic. This could be seen in their refusal to wear face masks or to comply with social distancing.

The attempt to revive international trade in the midst of the pandemic is an attempt to guarantee profits for big business. This is the reason that López Obrador is abandoning his traditional lip service for the poor. It was clear that López Obrador was in the United States to serve capitalist interests: he was accompanied by businessmen Ricardo Salinas Pliego — owner of the conglomerate Grupo Salinas and a declared enemy of any kind of quarantine — and Carlos Slim, one of the richest people in the world.

According to analysts, however, the USMCA cannot save the U.S. and Mexican economies in the context of an international recession. But what it will do, however, is increase the hyper-exploitation of the Mexican working class, as well as bolstering Trump’s public image at a time when he desperately needs good press.