What lessons can we take from the West Virginia teachers strike? 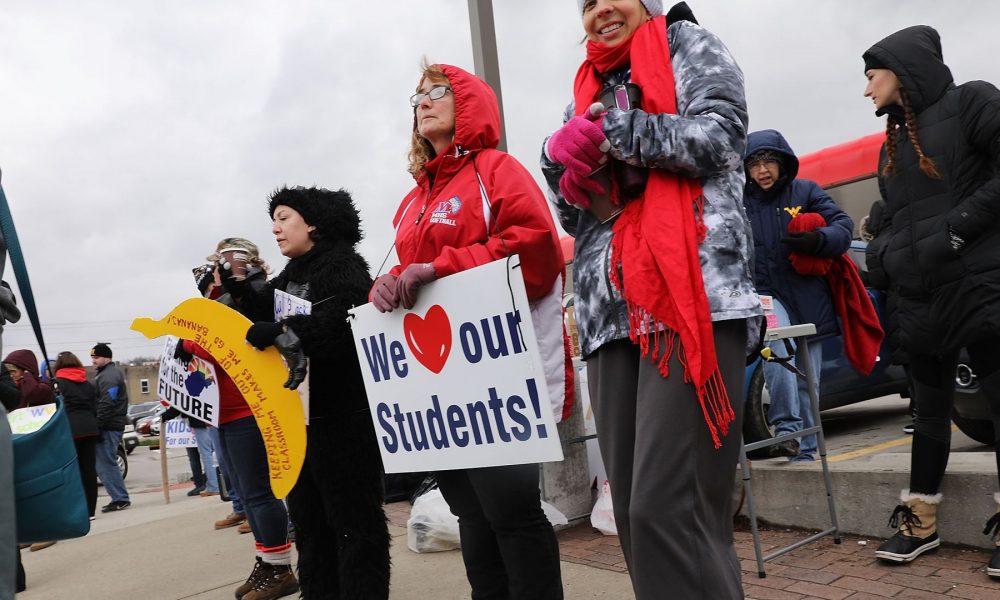 Thousands of West Virginia teachers recently ended their nine day strike after the state legislature failed to pass legislation meeting their demands for a 5% pay increase and a fix for rising healthcare costs. Schools in all 55 of the state’s counties were closed for the duration, giving rise to the Twitter hashtag #55strong. The strike began with a 22,000-strong walkout February 22, a statewide action affecting some 277,000 students. With teachers in Oklahoma, Kentucky and New Jersey also calling for strike action against austerity and an erosion of workers rights, workers may be on the cusp of a new wave of militancy, with West Virginia leading the way.

To put this labor action into context, West Virginia is 48th in the nation for teacher compensation. Many teachers report having to go on public benefits and/or take second and third jobs just to survive. But even more pressing than their low pay is changes to the Public Employees Insurance Agency, or PEIA, that threaten to cancel out any pay increase with rising healthcare costs. (For more on the significance of healthcare in this fight, check out Megan Day’s explanation of how Medicare-for-all would free up workers to fight for other, more radical gains.)

While West Virginia has a reputation for being Trump country, it has also been the site of some of the nation’s fiercest labor struggles as coal miners fought against hyper-exploitative working conditions. The 1921 Battle of Blair Mountain, which saw armed workers facing down the bosses’ private army and the state National Guard, remains the largest labor uprising in US history, and many teachers can trace their family lineage back to union coal miners. Hence, it comes as no surprise that striking educators are drawing an explicit connection with past struggles by wearing red bandanas around their necks, a practice which earned militant coal miners the derogatory nickname “rednecks” in the 1920s. Like an increasing number of workers across many industries nationwide, the striking teachers know a college degree will not protect them from the predations of capital. Especially considering they’re subject to the institutional sexism that devalues “pink collar” jobs like teaching and other work in the realm of social reproduction. (The strike’s relevance to feminism grows readily apparent when you consider about 75% of teachers nationwide are women.)

As it turns out, many of the strikers are fighting the very same companies their forefathers once fought, companies which have owned the state wholesale since its inception. As many have pointed out, the most logical source of revenue for education in West Virginia is the corporations that continue to extract profits from the state’s natural resources and working class while paying criminally low taxes. The same State Senate that claims it cannot afford ~$140 million for a 5% pay raise is currently considering a piece of legislation that would gift the same amount to the coal, natural gas, and manufacturing industries in tax cuts. Aptly nicknamed the “Just Cut Taxes and Win” amendment, this Senate resolution would continue the upward redistribution of wealth that’s been going on for decades. It’s not hard to see why many of the state’s workers – the teachers, the parents affected and the 1,400 West Virginia Communication Workers of America members who’ve also downed tools—have had enough.

After five days, Governor Jim Justice, himself the scion to a coal mining fortune, proposed a deal to give the teachers a 5% pay increase and establish a “task force” to deal with PEIA at some nebulous point in the future. The teachers’ associations acquiesced and called for an end to the job action. But it wasn’t enough for the rank and file, so they self-organized to reject their representatives, shifting the nature of the action from a mere “unlawful” strike to an unlawful wildcat strike. “People are…pretty infuriated with the issue of the health insurance task force,” teacher Jay O’Neal told LeftVoice. “It was our biggest issue, and we got a task force. We like the raise, don’t get us wrong, but this was our biggest issue.” Teachers also didn’t trust the Republican-controlled State Senate to enact any of this into law, a fear that has proven legitimate as the Senate finance committee stalls on appropriating funds.

As West Virginia is a right-to-work state, the two unions representing teachers there, AFT and WVEA, plus the West Virginia School Service Personnel Association, are technically just “associations” that workers may join voluntarily. These bodies play a role in negotiating but must deal with the state government, which can hypothetically pass legislation to meet their demands. In the absence of a strong union bureaucracy, West Virginia’s grassroots, bottom-up coalition of workers is stepping in to provide a small preview of what organizing might look like in a post-Janus country — or, God forbid, one where so-called Right-to-Work is the law of the land. (Here’s Kevin Frosen on how blows to traditional unions might have the unintended effect of returning American labor to its radical, militant, “do it yourself” roots…although, as we’ve seen in states like Wisconsin, this outcome is far from certain.)

Since before the strike began, teachers have been emphasizing they are fighting not only for themselves, but their students. After all, what kind of public education can West Virginia offer if low pay and poor benefits are driving the best teachers out of the state?

Via The Atlantic:
“In part because of how little West Virginia pays its teachers—$45,622 on average in 2016, making it 48th in the country for educator salaries—districts have had to lower the hiring bar to fill vacancies. A sizable percentage of the instructors who’ve been hired for full-time teaching positions lack conventional certification and training: Close to four in 10 instructors teaching math courses for students in grades 7 through 11, for example, are not fully certified. Meanwhile, teachers haven’t had a statewide salary raise since 2014.”

This shows an intersection of particular grievances with the interest of the working class at large not seen in many labor disputes in recent years, as established unions tend to represent the narrow interests of their members. On a more immediate level, teachers have been working with local pantries and volunteers to assemble and distribute meals to students who rely on free or discounted breakfast and lunch programs at their schools, at times paying for food out of their own pockets. These instances of mutual solidarity are an echo of the successful Chicago Teachers Union strike of 2012, when educators organized against the inevitable media backlash by convincing parents and the community beforehand that the interest of public sector teachers is the interest of the working class as a whole. Then as now, anyone saying “won’t someone think of the children?” had better check their facts.

In a state racked with generational poverty and exploitation, it’s no surprise that West Virginian parents and students have been largely supportive of the strike. While some students are treating it like a vacation, many are joining teachers on the picket lines in solidarity. Anyone who doubts students’ understanding of the situation would do well to watch the video of 6th grader Gideon Titus-Glover taking Governor Jim Justice to task for funneling money into the state’s tourism industry, a move that would directly benefit his own businesses, rather than public education. “Wouldn’t it be an investment to invest in smart teachers that would make me smart, and then I can in turn, turn around and do smart, good things for our state?” asked the boy, whom Justice has since cited as influential in changing his thinking on the issue. (It might also be possible that having all 55 school districts of his state shut down has highlighted the importance of the daily work required by tens of thousands of underpaid teachers and support workers.)

The truth is that education is not merely an ‘investment’ in the future of children and the state. In fact, teachers are instrumental to what Marxist feminists call social reproduction: essentially, the waged and unwaged labor necessary to produce a new generation of workers. For several generations, the economy of West Virginia has been based around the extraction of fossil fuels at great profit for bosses, degradation for the environment, and physical hazard for the miners. Generations of workers rose up to create one of the most militant and successful labor movements in the country. However, with the labor-saving techniques of strip mining and the declining profitability of coal, the unions that arose from these struggles have faded. What has not faded is the generational legacy of rank and file organizing and militancy.

In an era where capitalist development has increasingly commodified care and service work previously done in the home, it should come as no surprise that these sectors have become a site of struggle. If the West Virginia teachers can rise up to reclaim the legacy of their forebears, so can rest of the working class rediscover the tactics, strategies and solidarities that created institutions of power across the country.

Leftists should never forget that the gains that workers won in the bloody battles of the 19th and 20th centuries were only enshrined into law because our enemies sued for ‘labor peace.’ As the strike draws to a close, with the workers winning a partial victory- a 5% raise, they demonstrate a way forward for all of the working class. With capital and the state preparing to deliver the final blow to the bureaucratic business union in the Janus decision, the return of the mass, unlawful wildcat strike may be the key weapon in a new and revived workers movement. In light of this, perhaps the most important thing we can do is bring the inspiring example of their struggle home by organizing in our own workplaces and communities. After all, if the history of labor in that state and the country at large proves anything, it’s that an injury to one is an injury to all.