What does the reelection of Chávez mean? 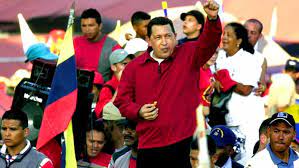 -1 As expected, Hugo Chávez obtained a big electoral victory with 62.89%
over 36.85% of the right-wing candidate Manuel Rosales1, in
all the states, even the state where Rosales is governor. With the
benefit of the comfortable economic situation fueled by high income from
petroleum, and the aspiration of the masses, who continue to yearn for a
real change in their living conditions, Chávez becomes the first
President of Venezuela to be reelected with a massive vote, bearing in
mind that voting has not been obligatory since the 1999 Constitution,
and with abstention having fallen to a level of 25%. Chávez has emerged
stronger in the fourth consecutive election in which the percentage of
votes he received has increased. Since the weakening of the right wing
after trying to topple Chávez with the support of US imperialism in the
coup of April 2002, the lockout-sabotage at PDVSA and during the recall
referendum of 2004, the right is beginning to recover ground with the
candidacy of Rosales.

-2 Contrary to what was predicted, although these presidential elections
were polarized, they were carried out normally, with the right wing
quickly accepting defeat. Rosales declared, “I know that some people in
emotional positions would like me to lie and send the people out into
the street. I could never do that because afterwards, the truth would
come out. We recognize that today they beat us.” From the chavista
forces, even Chávez himself praised the “mature” attitude of the right
wing. The Catholic Church and the Venezuelan business class permanently
called for calm and praised the present electoral process. In this
sense, the declarations of the US State Department are indicative, as
well as the quick response by the Venezuelan Chancellor Nicolás Maduro,
assuring that the government of the reelected President, Hugo Chávez
Frías, “has always been willing to have better relations with the US
government.” Sectors of the business class congratulated Chávez: “…
the businessmen who have worked jointly with the national government
make clear their intention to go on contributing to ‘putting an end to
the bureaucracy, to creating more jobs, and turning Venezuela into a
power in all possible aspects'” (ABN, Bolivarian News Agency, December 4).

-3 The workers and poor people still expect much from the government of
Chávez. Massive voting clearly expresses this, and even the illusions
and hopes that they will get out of poverty and the fundamental demands
of the big popular masses will be fulfilled by the hand of Chávez are
strong. But up till now, and after 8 years of governing, very little has
been put forward to satisfy the structural demands of the workers, the
landless peasants and the big impoverished urban sectors. The Misiones
(government social programs), although they have shown certain
noticeable results among the poor in health care and education, as a
whole do not aim at solving the structural problems in which the immense
majority of the population has been plunged and lives. What is more, the
Misiones have begun reaching their limit, and in programs like that for
housing they have obviously failed. While official statistics show that
poverty has been reduced from 50.4% in 1999 to 33.9%2 now, the
tremendous social inequality between rich and poor has not been reduced.
Unemployment, while it has been reduced slightly in general terms, has
reached 23% among the young, and the majority of new jobs are unstable,
even in the government’s own offices. It is important to emphasize that,
among the entire active labor force, almost 50% is in the informal
economy. As for what this does to the relation between workers’ wages
and capitalists’ profits, according to official data, between 2002 and
2005 income distribution relating to wages fell from 33% to 25%, while
capitalists’ profits rose from 38% to 49% (see the graphs). 3 From
increasing national production, we workers are entitled to a smaller
part. But the big advantage of Chávez is that the popular sectors do not
identify him as the one responsible for the fact that little progress
has been made; instead they blame the state bureaucracy and the
government sectors that surround the President, as well as corruption.
It is not accidental that Chávez, in his brief speech from the balcony
of Miraflores tried to answer this question by suggesting that what is
coming is the struggle against bureaucracy and corruption. Up till now
Chávez has spoken of “deepening the Bolivarian revolution” but has not
announced concrete measures of any sort.

-4 As we have said, Chávez’s advantage, besides his great popular
support, is the economic boom. This favorable economic situation is
shown in the most important macroeconomic indices: in the last three
years the economy grew by 17.4% in 2004, 7% in 2005, and is expected to
have grown 9% in 2006. It’s important to point out that in the preceding
years, there was a steep economic decline. In 2002 GDP shrank by 9% and
in 2003 by 9.4% as a consequence of the lockout-sabotage. The entire
process is fed by the high price of oil, the average price of a barrel
of Venezuelan oil reaching $58.59 in 2006. Meanwhile the reserves are
currently valued at $35,060 million, the highest ever in their history4.
But throughout this situation, the ones who get the greatest
economic benefits are all the business owners and the transnational
sectors. The president of the government banking commission agrees that
“banking is one of the best businesses in the country.” In the oil
industry, the big transnationals have not stopped stuffing their
pockets. They are now confident in the “sovereign” oil politics that
Chávez is pushing today with the “New PDVSA,” which are based on the
formation of mixed enterprises shared between the state and the
transnational oil corporations, transforming the transnational
corporations into owners of 49% of the oilfields and installations in
the new companies.

-5 The workers can see this situation, although they still trust Chávez.
So despite the attempts of the government and the union bureaucracy to
put a brake on workers’ struggles or dilute them in the electoral
contest, the workers struggles that have been breaking out across the
country have been numerous and important. These struggles are
essentially sectoral and for union rights, and do not yet directly
challenge the government. But it’s important to emphasize that the
workers are beginning to struggle with their own methods such as
strikes, factory occupations, shutting down streets, etc. They resisted
the blackmail from the union bureaucracy tied to the government, which
told them not to take to the streets, to strengthen Chávez’s reelection.
If the current trends continue in the government and the persistence of
the working class, popular, and poor peasant struggles, there’s no
saying that the popular support that Chávez counts on will not begin to
erode, and that the workers’ political experience with Chavismo will
advance.

-6 The Youth of the Revolutionary Left (JIR) waged a determined struggle
to run an independent working class candidate in these elections, a
campaign that would have been feasible. But we faced the obstacle of the
very same people who had every chance to do carry this out, principally
the majority of the leadership of the Party for Revolution and Socialism5 [PRS, a new party based in the UNT union federation, in which the
JIR is a minority faction]. Against the decision of this sector to call
for a vote for Chávez, we declared ourselves as a public faction of the
PRS for true class independence, calling for a blank-ballot vote. But we
were also opposed by the representative of the LIT-PSTU [the Morenoite
international], which distinguished itself by forming a united front
with the majority sectors of the PRS, telling us that we “screwed up big
time … calling for a blank-ballot vote.” In the coming period it will
be crucial to strengthen the fight for the struggles of the workers,
poor peasants, and popular sectors not to stop because of the electoral
climate, for them to triumph and extend themselves, rising up to the
level of confronting the Chávez government. The key will continue to be
the struggle for independent working class politics, and so we call on
the honest members of the PRS to reflect on what has occurred, in order
to question the politics of the majority of the PRS leadership,
preparing themselves for the events to come. To advance toward
independence for the working class, the union tendency C-CURA (Classist,
United, Revolutionary and Autonomous Current) must abandon its
adaptation to Chavismo and fight for the National Workers Union (UNT) to
completely break from its subordination to the government.