What if a Trotskyist Were Part of the Presidential Debate?

The Democratic Debate on Tuesday was boring. But the presidential debate last Sunday in Argentina was something completely different, thanks to Trotskyist presidential candidate Nicolás del Caño. He called the president of Argentina “Trump’s bootlicker” and denounced the IMF’s role in Ecuador. We present the highlights. 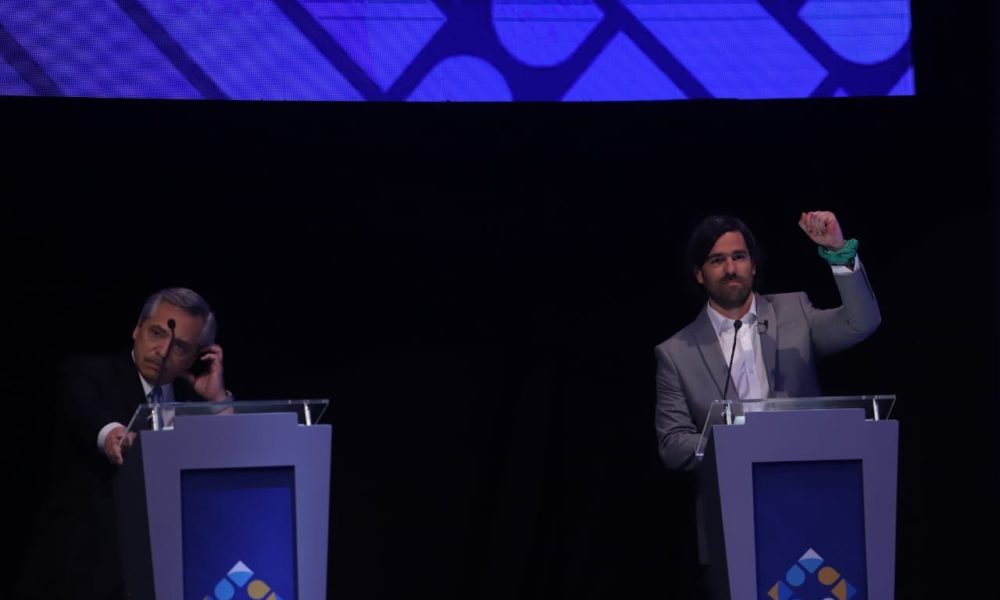 On Tuesday, the presidential contenders of the Democratic Party held a debate in Columbus, Ohio. Even though 12 candidates were vying for attention, it was largely anticlimactic. The candidates, from centrists like Joe Biden to the “democratic socialist” Bernie Sanders, agreed on many points. They all wanted to reduce wealth inequality with different kinds of taxes. Unsurprisingly, no one talked about expropriating billionaires.

On foreign policy, they all denounced Trump for withdrawing U.S. troops from Syria, focusing on how Trump was making it more difficult for U.S imperialism to dominate the globe. Even Sanders said Trump’s erratic decisions make it “harder to do our foreign policy, our military policy.”

Two days earlier, on the opposite end of the American double continent, another debate took place. Six candidates for the presidency of Argentina gathered at the university in the city of Santa Fe (exactly 5,144 miles south of Columbus). Mauricio Macri, the current right-wing president, got 32% at the primary elections in August. His main rival was Alberto Fernándenz of the center-left Frente de Todos (Front of All), who received almost 48%. But these two bourgeois politicians did not get all the attention that night.

39-year-old Nicolás del Caño, the presidential candidate of the Workers Left Front (Frente de Izquierda y los Trabajadores—Unidad, FIT-Unidad), produced some of the highlights of the debate. Here are four:

Macri explained how his government supported a coup attempt in Venezuela, led by Donald Trump and John Bolton: “We recognized President Guaido and denounced the violation of human rights in Venezuela.” Del Caño countered:

The position of the Left Front is very clear. We never supported the authoritarianism of the Maduro government, or its policies. But Mauricio Macri is a bootlicker who supports foreign intervention by the United States. He is Trump’s bootlicker. But Sergio Massas, who is now with the Frente de Todos (Front of All), also welcomed that foreign intervention. For us, it is the working people of Venezuela who have to resolve this crisis in their favor.

Unfortunately, this kind of clear anti-imperialist message was completely missing from the campaign of Bernie Sanders, who legitimizes attempts at regime change in Venezuela.

For twelve days, workers and peasants in Ecuador went out onto the streets to fight against austerity imposed by their government and the IMF. Del Caño used his time for a minute of silence for those who gave their lives in this struggle:

I want to use this time, and I want the clock to keep running, to pay tribute to the workers and the indigenous peasants of Ecuador who died as a result of the IMF’s repression. I want my time to pass in silence.

After the debate, politicians from the center left made fun of his moment of silence. This just proves, however, that they intend to implement additional IMF austerity plans, despite their promises on the campaign trail.

Del Caño also focused on the cancellation of Argentina’s external debt and the struggle against the IMF. In contrast, none of the Democratic candidates in the U.S. demonstrated that they are against continuing imperialist plunder through the foreign debt. They do not consider the misery to which the IMF is subjecting the people of the world’s poorest countries to be a problem.

First of all, I want to send greetings to the national meeting of women and [gender] dissidents that is taking place in the city of La Plata. And to the millions of women who took to the streets to make the shout #NiUnaMenos [Not One Woman Less] heard in our country and around the world.

He reminded the audience that last year, senators from Macri’s coalition and from the Frente de Todos had torpedoed a bill that would have legalized abortion in Argentina. He made their hypocrisy clear:

Governors from both coalitions, in Tucumán and Jujuy, had forced girls as young as 11 to give birth against their will. While some pro-choice activists are supporting Fernández and Kirchner, the Left Front is the only coalition with 100% pro-choice candidates. All other parties are prioritizing the dogma of the Catholic Church against the rights of women.

Del Caño ended his speech by raising a fist with the green bandana that symbolizes the movement for abortion rights:”I am convinced that women will return to the streets, and it [the right to abortion] will be law.”

With a revolutionary socialist candidate in the debates, we are not limited to discussing whether we want slightly higher taxes on billionaires—we can talk about whether we need to fight for a workers’ government that expropriates all the capitalists and big landowners.

Up to now, the socialist left in the U.S. has largely thrown its hat in with social democratic candidates inside a bourgeois party. But the Argentine example shows the possibilities that open up if the left unites around a program of class independence and fights for anti-capitalist demands. The FIT just held a massive rally of up to 25,000 people in Buenos Aires and could get close to a million votes in the elections on November 27.