What Is behind the Confrontation between Armenia and Azerbaijan?

Armenia and Azerbaijan are on the brink of a new war for control over the disputed Nagorno-Karabakh region. Although the conflict is so far driven by local tensions, regional and global geopolitical factors also play a part, particularly the relations established in the recent wars in the Middle East. 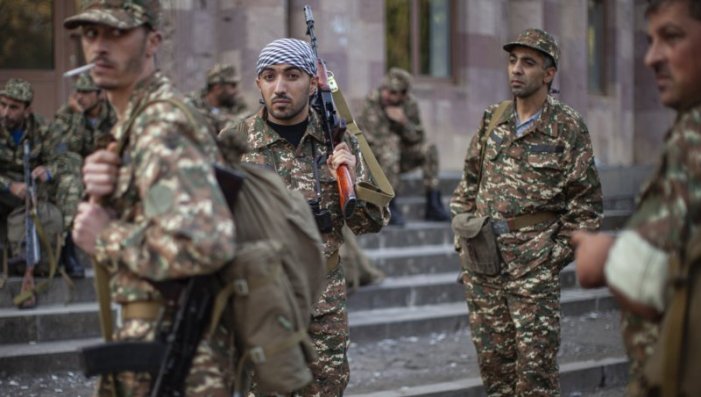 While the world watches President Trump’s battle with Covid-19, adding uncertainty to an already uncertain U.S. election campaign, tens of thousands of miles from Washington (but geopolitically not so far from “the West”), Armenia and Azerbaijan are on the brink of a new war for control over the disputed Nagorno-Karabakh region.

Since September 27, when this new phase of the conflict broke out, military tensions have been escalating. Although the theater of operations is still largely circumscribed to Nagorno-Karabakh, the bombings could have affected the strategic oil pipeline Baku-Tblisi-Ceyhan (BTC), which transports crude oil from Azerbaijan to the markets of Europe. There is fighting, concentration of tanks, and artillery helicopters. The dead and wounded, including civilians, already number in the hundreds. Despite repeated calls for a ceasefire and the efforts of the mediating powers, mainly France and Russia (the United States has kept out), none of the warring parties have sent any signals in that direction.

The reactivation of the conflict between Armenia and Azerbaijan is a long-announced fact. In mid-July, in a border clash more than 300 kilometers from Nagorno-Karabakh, Armenia killed a general and several Azerbaijani soldiers. This skirmish provoked a wave of reactionary nationalist mobilizations in Azerbaijan, permitted by the government, that created a more-than-favorable climate for relaunching the war.

Two days before the hostilities began, Azerbaijani president Ilham Aliyev announced the attack at the UN’s (virtual) General Assembly, although it went practically unnoticed. In his speech, Aliyev reaffirmed his government’s decision to restore control of Nagorno-Karabakh and adjacent regions. Turkey’s decisive support for Azerbaijan did the rest.

The timing is not accidental. Both countries have been critically affected by the coronavirus pandemic, economic difficulties, and the repudiation generated by their anti-democratic policies.

Can the war between Armenia and Azerbaijan weaken Russian hegemony in the region?

In Azerbaijan, which is once again a petro-state, the economic crisis resulting from the fall in oil prices has been feeding popular discontent with Aliyev’s authoritarian government, which has been in power since 2003 and exercises brutal social control through repression and the action of a vast state security apparatus.

In Armenia, Prime Minister Nikol Pashinyan, who came to power in 2018 as a result of a sort of “velvet revolution,” has taken a pragmatic turn toward Russia and is now facing a crisis of his government coalition and a fall in the GDP of at least 6 percent as a result of the pandemic.

Although the conflict is so far driven by local tensions, regional and global geopolitical factors also play a part, particularly the relations established in the recent wars in the Middle East.

The southern Caucasus region, particularly Nagorno-Karabakh and adjacent areas, has been the scene of low-intensity confrontations. But these “frozen conflicts” — such as that between Armenia and Azerbaijan, in which there is neither a formal war nor a “peace agreement” — have remained contained in the former Soviet sphere with the mediation of Russia, which remains the region’s hegemonic power.

Armenia is integrated into the Russian orbit. It is part of the Eurasian Economic Union and of the Collective Security Treaty Organization (CSTO), the Russian counterpart of NATO for which the Kremlin would be obliged to intervene militarily if its territory were attacked, which is not the case now because the confrontations occur in Nagorno-Karabakh, that is, Azerbaijan.

In addition, Russia has a military base in Armenia, with about 5,000 soldiers. At the same time, Russian president Vladimir Putin maintains relations with the Azerbaijani government. He sells weapons to both countries. And, above all, he is interested in maintaining trade relations and preserving the strategic corridor that links Iran and South Asia with Russia. That explains why Moscow’s policy is to avoid any escalation and establish peace talks, as it has done on other occasions.

But the active intervention of Turkey, a historical ally of Azerbaijan and the one responsible for the Armenian genocide of 1915, has changed a local conflict into a regional one, involving large and medium-size powers with a global reach. It raises the possibility of a confrontation, even accidental, between Turkey and Russia, which are already competing in Libya and Syria. It involves Iran on the side of Armenia and Russia, and the state of Israel on the Azerbaijani side, since Israel has a particular interest in undermining Iran, as well as a lucrative business in selling arms to Azerbaijan. It is also deepening divisions within NATO, of which Turkey is a member. The paradox is that the NATO powers are aligned with Russia in trying to disarm this time bomb and return to a relative status quo, against the openly belligerent position of Turkish president Recep Tayyip Erdogan, who is pushing it to extremes.

Turkey’s open interference in the Caucasus is part of Erdogan’s offensive foreign policy, which, like that of other regional actors, is explained more by the weakening of U.S. leadership and the divisions in the European Union than by its own strengths. Erdogan had gambled on exporting the “Turkish model” as a way of diverting the Arab Spring of 2011, and with that aim, he had supported the government of the Muslim Brotherhood in Egypt. The failure of this more reactionary approach had left him at a disadvantage against Saudi Arabia and in conflict with the United States, which he accused of having, at the very least, tolerated the attempted coup d’état against him in July 2016.

But Erdogan made up for the miscalculation with a growing activism, which ended up paying off. Turkey has become a decisive factor for any solution in Syria and Libya, where it is on opposite sides to Russia (and France in the case of Libya). It has launched repeated military attacks against the Kurds in Syria, even when they were the only U.S. allies on the ground. And recently it launched a territorial dispute with Greece and Cyprus to secure oil and gas routes in the Mediterranean. This “neo-Ottomanism” of Erdogan is accompanied by a brutal Bonapartist and repressive turn at home, particularly against the Kurdish opposition of the People’s Democratic Party.

In short, the governments of Azerbaijan and Armenia are encouraging reactionary national hatred, and although this is more than enough incentive for war, various powers are aligning themselves on one side or the other according to their own interests.

The conflict in Nagorno-Karabakh is of long standing. It has its origins in Stalin’s policy of national oppression, in which Nagorno-Karabakh, which is mostly Armenian, was established within the borders of Azerbaijan. Stalin’s policy of denying the rights of self-determination to the smaller nationalities historically oppressed by czarism was denounced by Lenin in his will as a chauvinism contrary to the interests of the working class, since “national injustice” conspired against the solidarity of the exploited and undermined the anti-imperialist struggle. History proved him right.

On the eve of the Soviet Union’s collapse, under the government of Mikhail Gorbachev, national independence was a motor for popular mobilizations and an opportunity for bureaucrats to recycle themselves into nationalist leaders.

Mobilizations for the independence of Nagorno-Karabakh and its reunification with Armenia, and anti-Armenian pogroms, began in 1988. In 1991, with the dissolution of the Soviet Union, the region voted overwhelmingly for independence in a referendum, which in 1992 finally led Azerbaijan to launch a war against the region’s right to national self-determination. That brutal war, which left 30,000 dead and a million displaced, was suspended by a ceasefire in 1994 negotiated mainly by Russia, the United States, and France (as well as Armenia and Azerbaijan), which formed the so-called Minsk Group. The agreement kept Nagorno-Karabakh within the borders of Azerbaijan but under an Armenian government.

The United Nations rejected the right to national self-determination. And the independent republic of Artsakh proclaimed by Nagorno-Karabakh was not recognized by any country (including Armenia). Moreover, in the course of the war, Armenia, which was supported by Russia, advanced not only over Nagorno-Karabakh but also over a considerable swath of surrounding Azerbaijani territory, expelling the local population, which was not allowed to return after the Minsk agreements. Because of this dynamic, what seems to prevail during the current conflict is the reactionary use of nationalism by the capitalist governments of Armenia and Azerbaijan, on which foreign powers like Turkey act for their own ends. This makes a regional war quite possible. In the course of events, however, the conflict could change in character.

The great lesson of this endless conflict is that the imperialist powers, Russia and the governments of Azerbaijan and Armenia, have been unable to provide even a minimally democratic solution, by deepening the conditions of oppression. Therefore, the only solution that can bring lasting peace begins with the withdrawal of the foreign powers, the recognition of the right to national self-determination, the return of displaced persons, and the struggle against the capitalist governments, which are the real enemies of the workers and popular sectors of Armenia, Azerbaijan, and Nagorno-Karabakh, with the goal of establishing workers’ governments and a voluntary federation of socialist republics of the Caucasus.