What Lies After the Turkey Referendum

With two days left until the constitutional referendum vote in Turkey on April 16th, there are still a myriad of potential scenarios and outcomes. Regardless of the result of the vote, the left will be tasked to navigate a post-referendum political climate, with both considerable possibilities and challenges. 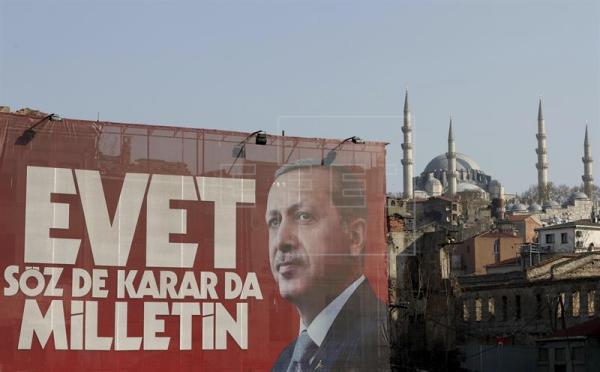 A look at the ‘Yes’ and ‘No’ campaigns reveals how the referendum vote shares have evolved.

While initially the ‘No’ campaign was more energetic and led by various local and civil initiatives, the excitement has waned over time. At the beginning, the two main opposition parties of the “No” camp, CHP (Republican People’s Party) and HDP (People’s Democratic Party), mainly led the campaign away from the public eye, holding a series of meetings with their constituencies and localities. The fact that the leaders and MPs of HDP, along with important numbers of the party structure have been detained as political prisoners during this time effectively limited the extent of its campaign. Currently, almost all HDP municipalities are now controlled by centrally appointed administrators instead of the elected mayors, who are in prison. Even Amedspor, a Kurdish football team in Diyarbakir, shared the same fate.

The CHP campaign was not surprising in any respect. While they managed to not damage the “No” vote campaign for a couple of months by only holding meetings with the party’s high profile MPs, the party leader Kemal Kilicdaroglu almost undid all of this by re-starting a debate around the July coup attempt, questiooning whether or not it was “controlled” by President Erdogan. This gave Erdogan yet another opportunity to stomp on the overly used narrative of courage and national self-determination that he has been knocking over everyone’s heads since the night of the coup attempt.

However, regardless of the minor successes and failures of the two campaigns one thing is clear: the campaigns have been working on vastly unequal grounds. While the “Yes” camp mobilizes all the opportunities, materially and propaganda-wise, that it is afforded by virtue of being in control of the state’s resources, the “No” campaign could barely be active outside of the major cities due to physical oppression and violence. The “No” mobilization has been undercut at every turn, whether through administrative red tape or through attacks of street mobs. Just recently, a panel discussion organized by the “No” camp that would be attended by the chairperson of LDP (Liberal Democratic Party), (which amassed an irrelevant 0.06% of the vote in the last elections and is more of a social media stand-up han anything else), had to be cancelled.

What is to be expected on Sunday and beyond?

As can be seen from the graph below, the “No” vote was ahead by a significant margin in the polls before the campaigns began. The uptick in the “Yes” vote was expected by all, as it would consolidate the AKP voters when the party machine and Erdogan would go out to campaign in the the squares. The previously undecided voters shrank from about 20% in January to 9% in the three months before the referendum. 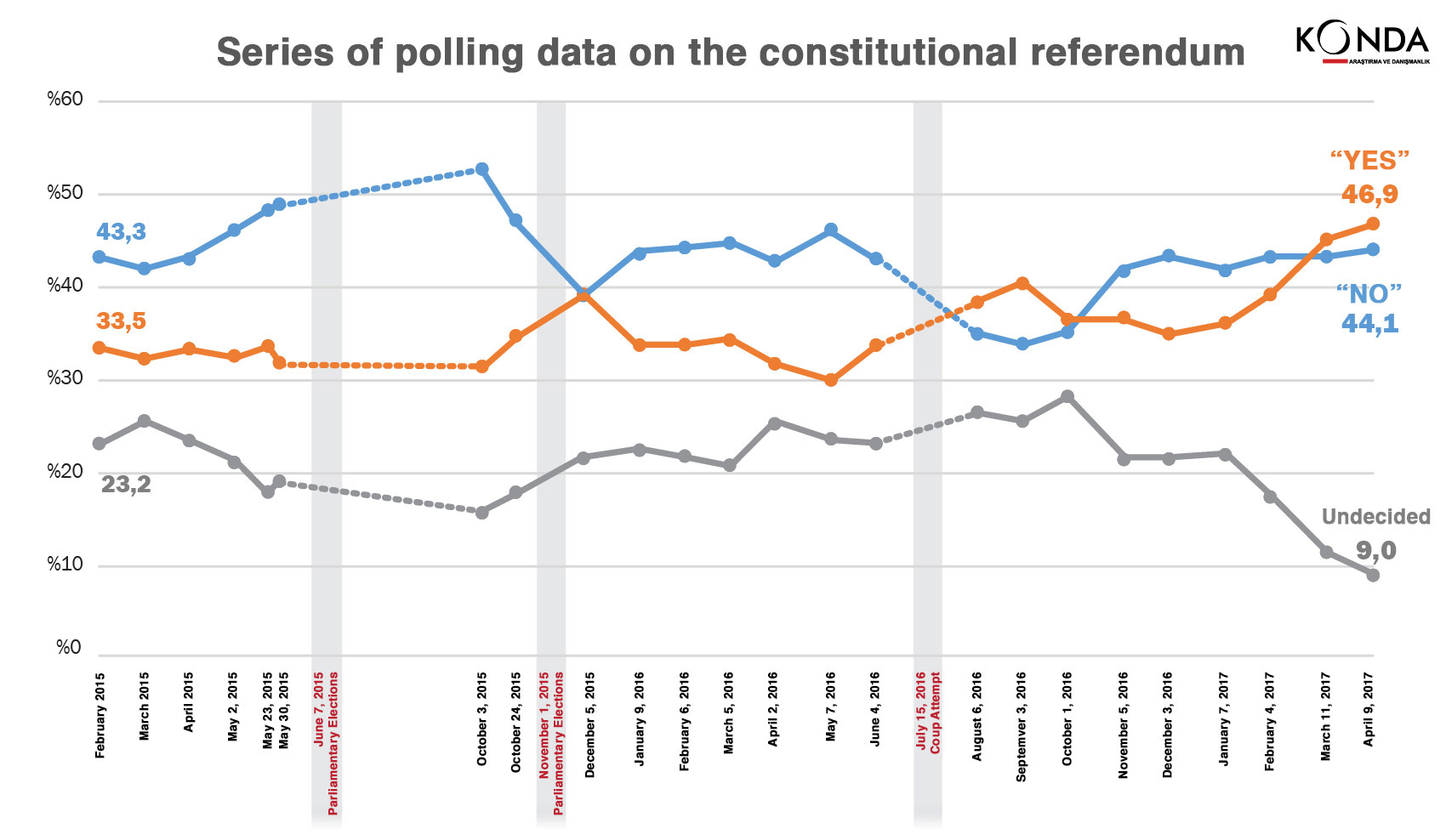 Regardless of which way the election goes on Sunday, one thing is clear: neither party will win by a wide margin. The “Yes” and “No” votes are well within striking distance of each other, often within the margin of error in all published polls. So, reasonably speaking, this will not be a landslide victory that Erdogan and AKP are used to. Whether passed or rejected, this election will be one of the clearest embodiments of the polarization underlying Turkish politics in the past few decades.

If the constitutional amendments pass, it is unrealistic for any president, Erdogan or any other future ones for that matter, to rule over such a country with the fullest extent of the constitutional rights granted to them by the referendum. The fact that the amendments will have passed with a narrow margin and weak support will place practical constraints upon whoever succeeds to the presidency., In addition, regardless of 15 years of strong rule, there still remains an opposition bloc that the AKP could never and conceivably speaking will never be able to convert. The situation will be one, where – and in Erdogan’s case this is a more probable scenario –a president who does not take this practical constraint into account, the country will be even more divided, antagonistic, and ripe for internal conflict. In such a state, how the proposed presidential system will fare and how long can it last is up for debate. Given the current state of the economy, the deep polarization of society, and the international conjuncture in the region, we are at the end of the road for Erdogan and AKP. The left needs to be organizing and preparing for this real possibility before having to wait for the vote results, in order to sustain themselves with a clear agenda and objectives amidst a hostile political climate riddled with conflict.

If, however, constitutional amendments are rejected, we need to resist the lethargy that was prevalent after the June 2015 elections. Just as it is the case that Erdogan could never penetrate the bloc of 50% opposing him, it is also true that the left also did not yet make much of an inroad with, or transform politically, Erdogan’s own 50% support. Even before the date of the referendum was set, most of the left has been operating with the acceptance that Erdogan will turn the country upside down if his proposal is rejected.

Thus, it would be best if we prepare for the worst, given everything that has transpired between the 2015 June elections and the coup attempt. But there is one other option that the “No” vote will bring that the left can be preparing for, regardless of all the defensive strategies and controlled expectations. A constitutional amendment proposal of such magnitude naturally constitutes a de facto vote of no confidence in the government. It is our responsibility to hold the elected government accountable to the consequences of its political risk-taking.

The entire country is tired and resigned following an election marathon spanning five elections in three years, or three elections and one coup attempt in 22 months. However, our strategy and calculations should recognize that we could be in a renewed election cycle on the morning of April 17th, and our organization and energy should be cognizant of this.