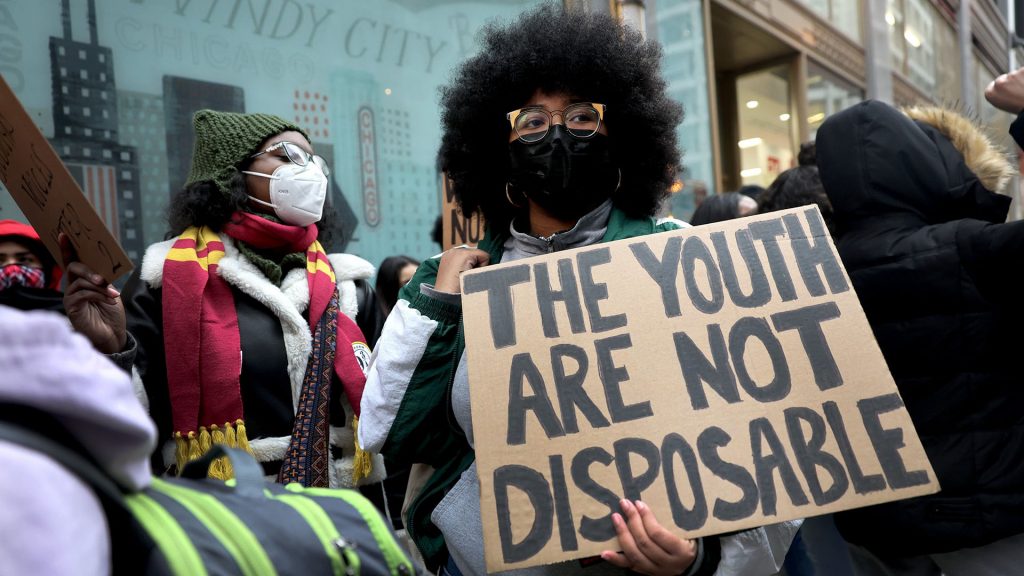 Public school students protest outside of the Chicago Public Schools headquarters after walking out of their classrooms on January 14, 2022 in Chicago, Illinois. (Photo by Scott Olson/Getty Images)

Fed up with mandatory in-person school attendance policies that fail to keep them safe, students are marching out of classrooms and into the streets.

Last week, hundreds of students from over 30 public high schools in New York City walked out of class to protest the unsafe conditions in city schools. Despite the latest Covid-19 wave, during which over 38,000 students and teachers tested positive COVID, school officials have insisted on in-person classes. That same week, students from a group called the Chicago Public Schools Radical Youth Alliance (Chi-Rads), formed days prior, led a walkout followed by a protest at Chicago Public Schools headquarters. Their demands included masks, tests, laptops for remote learning, and a voice at the negotiating table for COVID safety plans.

In Oakland, California, more than 1,200 students have signed a petition to their superintendent and school board demanding the school district shift to online learning. Barring that, the students demanded N95 masks in schools for every student, testing twice a week, and outdoor space to eat lunch. Students in Massachusetts, Michigan, and Maryland also organized petitions and walkouts last week, as did thousands of students, teachers, and parents in Ireland, Vancouver, Canada, and France.

These students march in the footsteps of so many student movements that came before them, many of which can lend not only inspiration, but also ideas for how to organize, fight, and win. There are numerous examples to draw from. The French uprising of May–June 1968 began as a student movement and grew into a massive general strike that nearly sparked a revolution. That same year, Mexico was rocked for months by university student strikes that also inspired sectors of the working class into action.

In this article, we highlight two student movements of the 21st century, in Chile and Brazil.

Chile has a long history of combative student movements. In 2006, the so-called “Penguin Revolution” took place — named after the black-and-white uniforms worn by students. Close to a million students went on strike in May of that year with a wide array of demands, from free subway passes for students, to the waiver of the university admissions test fees, to free public education. The Chilean Student Federation organized massive protests that included marches, flash mobs, and “kiss-ins,” and eventually occupations at over 100 schools. Students locked officials out of the facilities and used their schools as a hub for organizing protests. When the government wouldn’t give in to their demands, the students escalated their tactics and organized massive marches alongside unionized workers; some marches brought over 100,000 people into the streets. The protests were met with intense violence from riot police, who beat and arrested students.

The movement won some of its demands, including free subway passes for low-income students (the movement had demanded this right for all students), and fees were waived for the majority of students testing into university — but the major pillars of the privatized school model remained in place.

In 2015, in the midst of an economic crisis, the government of the state of São Paulo, Brazil, announced the closure of over 90 schools. Hundreds of thousands of students were to be reassigned to overcrowded schools far from their homes. For many of them whose families relied on their part-time jobs to stay afloat, the added commute time meant they would have to drop out. Teachers’ unions protested, but were ignored.

In early November, students at a high school occupied their school building. They locked the doors to the building and organized a school-wide assembly to coordinate the occupation. Then they reached out to students at other schools and encouraged them to do the same, publishing a pamphlet that explained how to do so. Within a week, 100 schools across the state were occupied. By the end of the month, the number had doubled.

The government tried to use various tricks and intimidation tactics to get the students to end the occupations, but instead the students doubled down. Some of the students Skyped with Chilean activists who had been part of that country’s student movement and received tips and encouragement. They assembled committees inside the schools to coordinate cooking and cleaning. They organized their neighborhoods in support, going door to door to explain why they were protesting and to ask for donations of supplies. The students invited community activists into the schools to teach classes and workshops on topics ranging from feminism, to drumming, to students’ rights. Some teachers were invited to return to the schools and teach classes while buildings remained occupied. After a month, with no concessions from the government, students from some schools voted to escalate their tactics; they took chairs and desks out of the schools and used them to set up barricades in the streets. They were violently arrested by the police. After this first wave of actions, the governor of São Paulo agreed not to close any schools for one year.

While these examples are inspiring, organized students are not guaranteed to win. In Chile, the student movement secured only some of its demands, in the form of increased funding for public education, but tuition remained at public universities and the country continued to privatize the education system.

In Brazil, the students in São Paulo state won a one-year moratorium on school closures, but conditions for them worsened. There were two more waves of protests and school occupations in 2016, spreading to over 1,200 schools by October. This time, protests centered on curriculum changes, funding freezes for their schools, and a proposed new policy known as “School Without Parties,” meant to persecute teachers for expressing “Marxist” or “leftist” views in the classroom (sound familiar?). College students joined in and occupied the country’s major universities.

For many reasons, these occupations were defeated by the government, which used police violence to clamp down on protesters and evict occupiers. Importantly, the students and the labor movement did not unite in a struggle to defeat all austerity measures. They could have organized a general strike until they won.

But not all was lost. In 2019, the Chilean student movement returned to the scene — this time unleashing the biggest uprising in decades, which ended up forcing the government to agree to convene a constitutional convention.

Perspectives for the United States

The Oakland student petition states that “we will strike outside the [school district] building and it will last until the demands are met.” Waging a long strike will require the support of parents, educators, and other community members. In every community where students are striking, we encourage those students to organize not only each other, but their communities as well. It is essential for teachers’ unions to support and join these student actions. Work stoppages by teachers would go a long way in uniting teachers, students, and community members and securing safe school conditions. The ongoing protests and school blockades by education workers and their allies in France — bringing together teachers, other school, staff, parents, and students — are a good example.

One way to start conversations among students, labor, and the wider community is to hold solidarity meetings (over video chat, for safety), open to the community, and invite teachers, parents, and students organizing in other areas of the country to attend.

Today’s students can also learn from the long tradition of using democratic assemblies — large schoolwide or even citywide meetings in which everyone can make proposals, debate, and vote — to build powerful and united movements. Coordination between students in different cities, and even across the country, can be done by delegate elections to assemblies as well.

Students should also call on organized labor to support their strikes. The 2019 Chilean example is key here: while the student movement kicked off a moment against fare hikes, the labor movement joined with its own demands and called a general strike that nearly toppled the president and forced the government to agree to a constituent assembly to draft a new constitution. This unity between students and labor is decisive for victory.

While we haven’t seen these kinds of explosive moments in the United States recently, we can be inspired by the December call by striking student workers at Columbia University, who wrote an open letter asking workers at other unions in New York City to join their picket line on a “day of action.” Truck drivers, public school teachers, nurses, Amazon warehouse workers, journalists, graduate workers at other city universities, and others answered the call that day and swelled the Columbia students’ numbers for the most well-attended picket of the entire strike.

Some of these students are beginning to see some small wins. Four days after the NYC students walked out, the Department of Education announced a new policy allowing for a remote-learning option, where students who logged in via online portals to access class resources and assignments would not be marked absent. Of course, this is still a far cry from what students and teachers need for a safe, enriching remote-learning experience.

These students have an opportunity to join the ranks of mass student movements throughout history, and have an opportunity to learn tactics and lessons from that history to strengthen their fight. After being failed by two presidential administrations, representing both of the bosses’ political parties, and every local government, they took to the streets. They may be about to learn that they and their communities are their only hope for keeping each other safe.