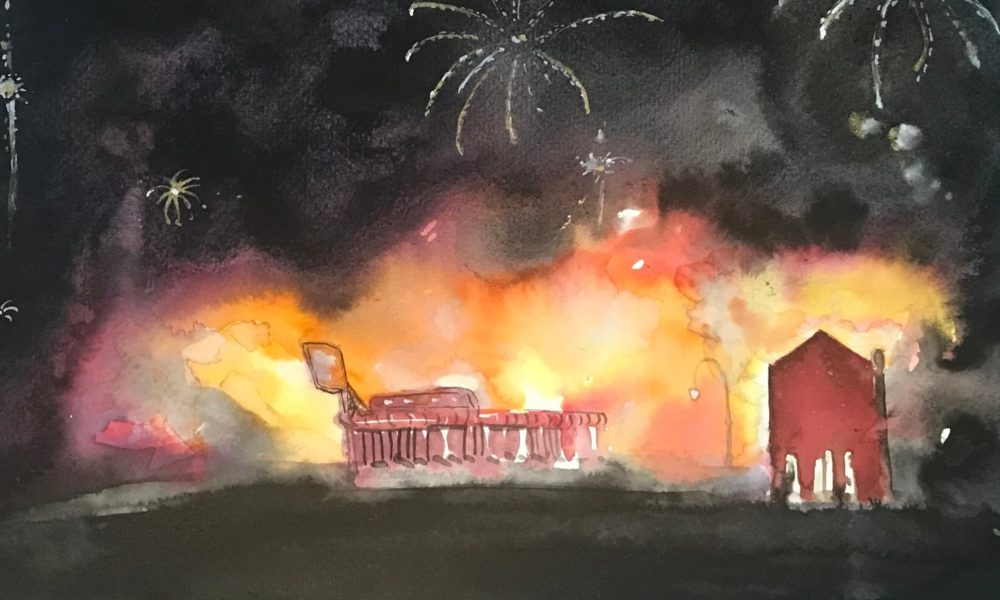 From The 3rd Precinct from Afar, 2020. Kambui Olujimi

For years, we have been hearing that anything but the most modest social democratic politics are impractical given the material realities of the present moment. According to this argument, the degree to which capitalism has a stranglehold upon our ways of thinking, the low level of struggle, and the power of the state, all make revolution look like a romantic and  impractical goal.

But in the past three months, we have seen a nationwide rebellion against the police and racism. By some estimates, it has been the largest protest movement in U.S. history. We have seen ordinary people spontaneously embrace militant tactics with street fighting across the country. Police stations have been raided and, in some cases, burned to the ground. The early days may have been the most militant, with 10,000 being arrested in the first ten days, but that militancy has sparked up again periodically, most recently in Kenosha. What does this development say about the view that we should focus on building socialism through social democratic strategy and elections within the Democratic Party?

The System is not Static

The primary issue with socialist arguments that caution against a revolutionary approach is that they forget that capitalism is not static, but is constantly throwing society forward in fits and convulsions. As Marx said in 1848, the first law of its relation to society is that “all that is solid melts into air.”

Capitalism is extremely dynamic, but it is its anarchic tendencies that give it this dynamism. This creates all sorts of contradictions that over the long term are incredibly destructive. The system breeds crises, and the destruction these crises leave behind brings people into active opposition.

When we think about the threats from capitalism that people are going to face this century — climate change, environmental collapse, mass migration, deepening systemic racism, and a sluggish economy — it becomes difficult to imagine a century where revolutionary politics could be more relevant.

The present system is putting the entire world, human and non-human alike, into deep crisis. As these crises deepen, our societies will begin to look toward solutions that really go to the roots of the problem. All we have to do to see this development is to take a look at the past few months.

The Limits of the Reformist Approach

There are two reasons why revolutionaries reject the social democratic strategy of trying to achieve socialism through elections.

The first is that revolutionaries recognize that the state under capitalism is not a neutral space for debate where various positions are respected, and decisions are determined by reason alone. Marxists understand that the state is a tool of class oppression, a hammer which one class uses to crush the aspirations of other classes. It would be incredible if all we had to do to achieve a socialist society was vote for the right people. But if that is all that building a world beyond capitalism would require, we would certainly be there by now. The reality, however, is that even when reformist socialists have ascended to the height of state power, they have at best been able to become the semi-benevolent stewards of capital and win short-term reforms for the working class. Given the long-term logic of capitalism, however, these gains, and the opportunity to advance further reforms, have mostly disappeared at this point anyway.

The second limitation of electoralism, is the relation of reformist politics to the long-term destructive dynamic of capitalism. Reformist socialists argue against the revolutionary approach and counsel that revolution is an unrealistic dream. Instead, they say we need to be hard realists and adapt our strategy to meet people where they are at. While it is undoubtedly true that we should adjust our strategy so that it becomes relevant to ordinary workers, it is equally important that we are intransigent in linking this to the need for a fundamental break with capitalism, i.e. that we maintain a revolutionary politics.

If we were to give up our revolutionary positions then when the long-term destructive dynamic of capitalism pulls workers toward radical conclusions, we would be left behind the movement and become irrelevant. We can see this dynamic at work on a smaller scale in the way that some socialists supported police and police unions since they believed that in this way they could appeal to ordinary people. Now that the movement has moved dramatically to the left, calling for defunding the police or outright abolition, their position begins to look ridiculous, and they are forced to either backpedal or maintain an increasingly unpopular position, both of which result in their losing credibility.

The 21st Century — a Revolutionary Century

The past year has been one of enormous social upheaval worldwide. The remarkable uprisings in the second half of 2019 spanned the world, from Chile to Lebanon, France, Ecuador, Iran, and beyond. 2020 has been defined by the inequity of the impact of the pandemic along race and class lines, both in terms of the disease itself and the accompanying economic meltdown. Since May it has been shaped by the Black Lives Matter protests coming out of the United States and sweeping across the world. But this past year is only a small taste of the revolutionary upheavals that this century has in store.

The level of workers struggle is still relatively low in historical terms, but there are signs that this is changing. 2018 saw a wave of teachers’ strikes sweep across the country. The struggles in France, Iran, and Chile at the end of 2019 all involved large sections of organized labor. The uprising after the murder of George Floyd and Breonna Taylor saw some impressive shows of solidarity from unions and union members. The Global Climate Strikes of 2019 saw not just students, but workers as well, on strike to demand renewable energy jobs for former fossil fuel workers. Revolutionaries need to organize in unions to deepen this agitation, pushing against the union bureaucracy so that unions become a force truly representing working class interests. As the logic of capitalism puts further pressure on the living standards of the rank and file, this will become more and more of a common sense demand among union members, especially if revolutionaries are there to offer alternatives to the status quo.

There is no mechanism through which capitalism can reform itself from within. That the system is driving us at full speed toward immiseration and possible extinction is becoming increasingly clear to many people. The combination of these two facts is pushing people toward revolutionary politics and will do so increasingly the worse these crises get. The past year has been a demonstration of what Lenin, in “Letters from Afar” calls “miracles of proletarian heroism.” Of this, there will be no shortage in the present century. That is beyond question. Whether or not this heroism leads to the creation of a better system is dependent upon what Lenin calls “miracles of proletarian organization.”

What is certain is that capitalists will not allow us to achieve these miracles within their organizations. We may as well try to raise chickens in a den of foxes. The entire purpose of the capitalist parties, whether Democrat or Republican, is to maintain capitalist power, and to subordinate the interests of the working class beneath the needs of capital accumulation. Any attempt to build working class organization within these parties is therefore critically limited by that structure. Our class therefore needs to build its own party — a party that represents working class interests and is revolutionary in character. This revolutionary party is the vehicle through which “miracles of proletarian organization” can be realized.

Achieving a sustainable society will require that working class heroism and organization extend beyond the streets and reach into our workplaces where we can build the kind of power that can change the system. Revolutionaries need to be meeting these heroic movements, arming them with the historical knowledge and methods of past struggles, and channeling their discontent into the recreation of a force capable of overthrowing capitalism. The destruction capitalism is unleashing this century is going to make this historical perspective, and the willingness to translate it into action, increasingly important as time goes on.

Revolution is on the agenda for the 21st century. We need to adjust our politics accordingly.