What to Make of Sanders’ Big Win

With a 20% margin of victory, Bernie Sanders made a resounding statement in New Hampshire. What is the meaning of Sanders’ win and does the “democratic socialist” represent a challenge to capitalism — or a legitimization of it? 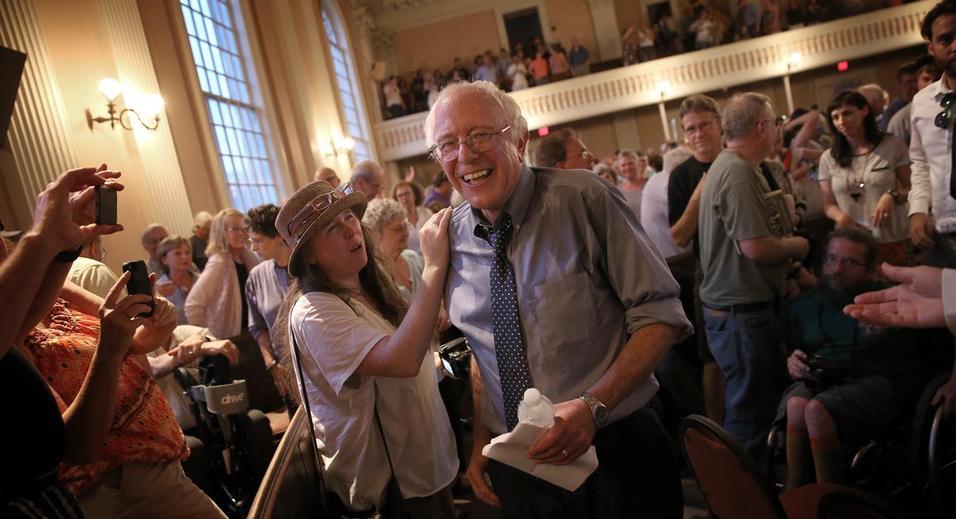 How he did it

Tuesday night’s overwhelming win by the senator from Vermont in the New Hampshire primaries has ensured that the Sanders phenomenon will not be fading anytime soon. Not only did he beat Clinton by 20 percentage points, he also earned over 50,000 votes more than Donald Trump, the GOP frontrunner and candidate who’s enjoyed the most media attention during this election cycle so far. It remains to be seen whether Sanders can continue this level of success outside of the Northeast, but it is clear that the fight for the Democratic nomination will most likely be a close race all the way to the finish.

What explains the monumental win by Sanders in New Hampshire? For starters, the Sanders candidacy has attracted more youth than any other candidate. Some polls showed that support for the self-described “democratic socialist” was as high as 84% among young people aged 17-29 in New Hampshire. That’s even higher than the support Barack Obama earned among youth in 2008. This is no coincidence. Across the U.S., youth are increasingly saddled with extraordinary levels of student debt, and suffer higher unemployment, are paid less, and work more precarious jobs. Sanders’ anti-establishment rhetoric and his promises to make public higher education and health care free and increase the minimum wage to $15 have resonated strongly among young people.

What can we learn from his success?

The success of the Sanders’ candidacy has demonstrated that socialism is no longer a dirty word in the minds of American youth. The days when the right wing would use the label as a smear tactic against Obama seem like a distant memory. Indeed it is capitalism today which increasingly struggles to prove its worth to young people, the working class, and the poor. With corporate profits and CEO salaries skyrocketing in recent decades while real wages for workers have stagnated or fallen, why should young people continue to have faith in the capitalist system?

Since the Occupy movement began in 2011, a class consciousness has developed among broad sectors of youth, who have begun to express their the anger at the 1%. For this reason, the candidacy of Hillary Clinton, who has spent her career forging close relationships with Wall Street, has generated little enthusiasm. Her innumerable ties to major corporations and investment banks, exemplified best by a $600,000 fee she received from a speech at Goldman Sachs, will likely dog her for the rest of the campaign.

In contrast, the Sanders’ rejection of corporate money and unique reliance on small donations has cemented him as the anti-establishment candidate in the eyes of many. Throughout his campaign, he has railed against what he calls the “billionaire class” and raised the need for a “political revolution”. This rhetoric has echoed the anger felt by youth and workers.

But let us not confuse Sanders for a socialist or a working class alternative. As we have written previously , what Sanders represents is a last-ditch effort to save the Democratic Party from complete abandonment by the working class and youth. Formally, Sanders may have been an independent prior to his presidential run, but no Democrat has run against Sanders in his congressional or senate campaigns with the support of the party leadership since 1988. Prominent establishment Democrats such as Harry Reid, Chuck Schumer, and even President Obama have all endorsed Sanders in his Senate bids. Sanders still considers Obama – who has expanded secret government surveillance, continued the occupations of Iraq and Afghanistan, carried out deadly drone strikes throughout the Middle East, and ramrodded the Trans Pacific Partnership free trade agreement – to be “a progressive” who has done “an excellent job”.

During the past week, the mainstream media has focused on the supposed hostility between Clinton and Sanders. Yet, what was clear after last week’s debate was not the wide gulf between their positions, but rather the opposite. On most questions, Sanders agreed with Clinton or differed only in degree; Sanders uttered the phrase, “I agree with what the Secretary said,” or some variation at least six times.

These similarities go beyond their campaign platforms. During the two years they served in the Senate together, Sanders and Clinton voted the same way 93% of the time. Sanders supported one of the worst bills signed into law by President Bill Clinton, the 1994 Federal Crime Bill, which created 60 new death penalty offenses and included a “three strikes” provision for federal crimes to put offenders away for life. It should come as no surprise that Black and Latino youth have so far been ambivalent about Sanders and Clinton. Neither candidate has offered solutions to the most pressing problems of their lives, most of all an end the widespread police killings and police profiling of people of color across the country.

On foreign policy, the similarities were most striking. Though he often touts his 2002 vote against the war in Iraq as evidence of his anti-war credentials, Sanders has coincided with Clinton (or her husband) on a wide range of imperialist adventures — from the NATO bombing of Yugoslavia to the U.S. war in Afghanistan. Asked whether he would support keeping troops in Afghanistan during the most recent debate, Sanders went so far as to say “Well, you can’t simply withdraw tomorrow…and allow, you know, the Taliban or anybody else to reclaim that country” as if the country was not in the midst of a more than 14 year occupation by U.S. forces.

On the current struggle against ISIS, his proposals have been little more than substituting “combat troops” with “special forces” in coalition with “Muslim partners,” a policy which we have trouble differentiating from that of Obama’s current strategy.

Which way from here?

Two scenarios are possible come June. The first and far more likely outcome is that Clinton, despite a few stumbling blocks, goes on to win the nomination, and Sanders, as the sheepdog of the party, dutifully urges his supporters to back her in the general election. In Tuesday night’s victory speech, Sanders reminded his supporters of the ultimate goal as he declared the “need to come together in a few months and unite this party” in order to defeat the Republican opponent.

The second, still distant, possibility is that Sanders gains enough support to win the nomination. With polls showing he would do well against the current front runners on the Republican side, let us assume for a moment that he would go on to win the general election. So what could we expect if Sanders were to win the presidency? Unfortunately, not a “political revolution” as he claims. We can look to his ideological counterparts in Europe for some insight here.

In the last few years, social democratic parties have won in France, Portugal, Greece, Italy and elsewhere. What have these victories meant? Not new gains for the working class, but rather increased austerity and privatizations, crackdowns on immigrants and restrictions on refugees, and, in the case of France, a month-long state of emergency. What is needed for a exit to the crisis is not reformist social democracy but socialism and only a revolutionary movement of the working class and youth can get us there.

Unfortunately even a good deal of the U.S. left has fallen in line behind Sanders, despite his reformist program and his pro-imperialist stance. Socialist Alternative is now openly campaigning for Sanders’ win with the launch of their #Movement4Bernie. The International Socialist Organization criticizes Sanders for working within the Democratic Party, but leaves open the door to supporting him as an independent. In the past, they have been critical of his support of Israel, the occupation of Afghanistan, etc. but declared that “By themselves, these positions wouldn’t necessarily stop [us] from supporting Sanders if we believed the overall thrust of his campaign was to create an ongoing political alternative to the two-party status quo.” However, in recent months, as the popularity of Sanders has soared, even these criticisms are less and less visible from the ISO.

Let us take up the demands of the youth who today stand behind Sanders — for a $15 minimum wage, free universal health care, and free college education, as well as the democratic demands of the Black Lives Matter and immigrant rights movement — and rebuild the movement to withdraw U.S. troops from Afghanistan, Iraq, and the entire Middle East. This is the foundation upon which we can begin the fight for socialism.