What’s Behind the “Straight Pride Parade” Courtroom Shenanigans in Boston?

Dozens of counter-protesters were arrested at the “straight pride parade.” What happened in the courts afterward? 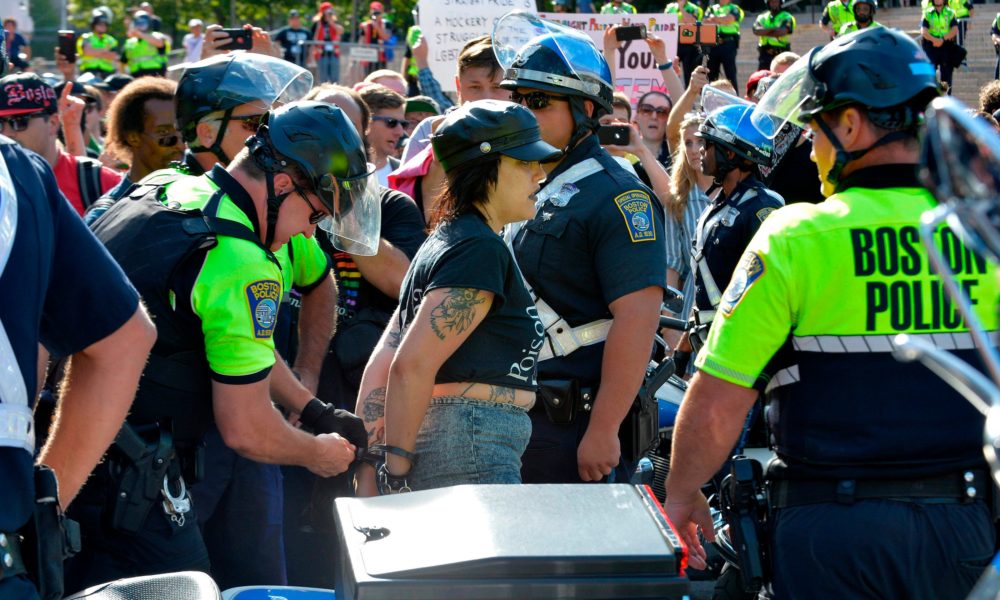 Boston on August 31 was the scene of a so-called “Straight Pride Parade” that drew just over 100 marchers. As Left Voice reported, it was actually a “white-supremacist, nationalist hate rally, bringing together the most racist, sexist, homo- and transphobic Trump supporters” organized by a group with strong ties to white nationalists. It also drew more than 1,000 counter-protesters—along with a massive police presence.

You may be interested in: Police Protect “Straight Pride Parade” and Attack Counter-Protesters

The cops were there for one purpose, and it wasn’t to “keep the peace.” It was to ensure the “safety” of the marchers. There’s no surer proof than the fact that the police ignored provocations and attacks by the marchers but pepper-sprayed, maced, punched, beat with batons, and ultimately arrested 36 counter-protesters—most for “disorderly conduct,” considered a “minor” charge.

A few days later, the scene shifted to Boston Municipal Court. Before Judge Richard Sinnott, Rachel Rollins, the Suffolk County district attorney, moved to dismiss the minor charges and pursue only those eight counter-protestors arrested for assault, including of cops. It’s a fairly typical thing in the United States: cops arrest demonstrators, and prosecutors drop the minor charges, sometimes in exchange for some “community service.” Rollins, it should be noted, ran for DA on a “reform” platform aimed explicitly at reducing the number of “low-level” nonviolent offenses charged by her office.

The judge was having none of it. He refused to allow Rollins to drop the charges, and when a defense attorney began to argue that he was overstepping his authority, he had her handcuffed and sent to a holding cell.

Rollins took the dispute to the Massachusetts Supreme Judicial Court, and on September 9 the SJC ruled that Sinnott had “no authority” to force her to prosecute a counter-protestor, citing cases as far back as 1806 about the separation of powers between the judiciary and the executive branch. The cheering from the American Civil Liberties Union and defense attorneys reverberated through the local legal community, while the cops—who in Sinnott’s courtroom had been celebrating—denounced the decision.

“Morale is probably at an all-time low between being used as political pawns and everyone looking down on the police,” said Michael Leary, president of the Boston patrolmen’s union. “It’s just not a good time to be a police officer.”

What’s really behind these courtroom battles? What do counter-protestors and those who support them have to celebrate?

To be sure, the fact that some counter-protestors will not be prosecuted is a good thing. The specific case brought before the SJC mentioned the lifelong harm that could result from having an arrest record. But that’s pretty much where the good stuff ends.

The courts—be they municipal courts or constitutional courts with extensive powers, such as the U.S. Supreme Court—comprise a judicial system designed, first and foremost, to protect and legitimize the social and economic relations established under capitalism. They exist to maintain the power of the state and keep it functioning on behalf of those who rule through their wealth and ownership. The courts are an integral part of subjugation. They reinforce every sort of oppression. They have always been the last line of ruling-class defense as people have struggled to overturn racism, sexism, and discrimination based on sexual orientation. They keep workers from organizing and striking. They do this by intervening directly but also by providing a “rule of law” that promotes the kind of reaction the ACLU and others had to the Massachusetts SJC ruling.

In other words, the courts do what is necessary to keep the capitalist system running smoothly. If they need to be relentless on behalf of those they serve, they do so. If in a given instance the calculation is to “give” a bit, they do so—as we saw in Boston.

It’s not every day that we get a concrete example of how that works in practice at the most immediate level, in a municipal court, and in an overtly and specifically political context.

The dispute was really about a municipal judge inserting himself in the way of the wink-and-a-nod system that has cops arrest demonstrators and then release them, which serves to reinforce the role of the police and send a message while not “gumming up the works” for overcrowded courts. In the end, the SJC ruling had everything to do with maintaining the prosecutor’s discretion to run that system the way it’s always been, and nothing to do with confronting the police. Meanwhile, those who take to the streets to confront the incipient fascist threat from “Straight Pride” and other actions will continue to face police brutality for doing so.

Whether it’s something relatively small, like dismissing “minor charges,” or national-level “criminal justice reform” aimed at confronting mass incarceration, if the people taking it on are politicians and prosecutors, you can be sure they’re just looking for a better way to maintain the system. It will be up to us to overturn it.