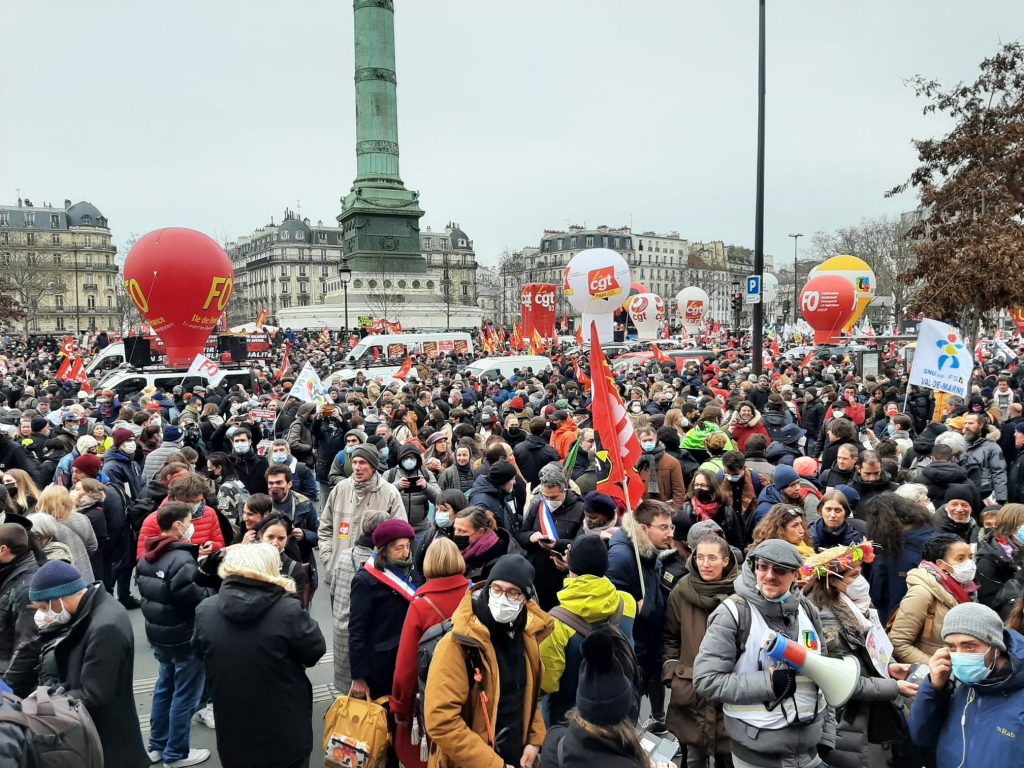 On Thursday, January 27, demonstrations were held throughout France as part of a one-day “interprofessional” strike across multiple sectors. Called by a coalition of union confederations, the demands focused on wages.

A Disappointing Turnout Despite the Burning Issue of Wages

In Bordeaux, Toulouse, and Marseille, marches began in the morning, bringing out between 3,000 and 4,000 demonstrators. There were other demonstrations across the country. In Paris, according to the unions, some 20,000 people marched after an outdoor rally at which union confederation leaders spoke. There were demonstrations of 4,000 in Lyon; 4,500 in Lille; 2,000 in Montpellier; 1,000 in Clermont-Ferrand; and more than 1,000 in Nice.

While the number of actions themselves were relatively numerous — Le Monde reported “nearly 170”— and even sometimes combative, the turnout remained limited. The coalition put the number nationwide at just over 150,000, fewer than participated in the last interprofessional one-day strike on October 5, 2021.

The balance sheet for the sectors most engaged in struggle right now is mixed. Workers in the national education system had been beginning most days with blockades of their high schools — an illustration of the anger among some of the youth. These actions were violently repressed, as had happened on January 13. In Paris on Thursday, the police broke up the blockades with arrests and beatings. In Rennes, the cops injured the skull of a student from the Brequigny neighborhood, who was hospitalized.

Thursday’s mobilization of workers in the national education system, whose anger persists after their historic January 13 strike, focused on wages. In Paris, two processions of national education system staff from different schools in the Ile-de-France region even amassed behind banners that read: “Blanquer resign!” — a reference to Jean-Michel Blanquer, the Minister of National Education. It was a sign of this persisting anger. However, participation was lower than on January 13,when 75 percent of primary school workers went out: only 20 percent participated on Thursday, according to the union. This is a reflection of how the policies adopted by the trade union bureaucracies have largely contributed to demobilizing national education workers.

More broadly, the mobilizations did not rise to the level of expressing just how radical the local conflicts have been. There were some exceptions to this, though. In Paris, for instance, undocumented workers from the Chronopost parcel delivery service formed an important contingent behind the banner of the SUD-PTT union. Workers from the Fnac store in Saint-Lazare, who have been engaged in an ongoing strike over wages, also marched. Striking workers from Dassault Aviation in Gironde also demonstrated, along with their supporters. But nationally, the historic actions that have been taking place around wages in the retail, agri-food, and industrial sectors were hardly represented.

As inflation continues to rise, and the prices of fuel and some foods soar higher, wages have become the central concern for a large part of the working class. If January 27 failed to consolidate all that anger, the blame must be laid at the feet of the trade union leaderships.

The trade union leaderships are meeting on Friday, January 28, to decide on next steps.

The Government Fears This Movement

The results of January 27 can be explained as the limits of a mobilization without a perspective for going forward. Railway worker Anasse Kazib, the revolutionary candidate for president of France, pointed this out at the Gare du Nord train station on Thursday morning. “Everyone says that we can’t keep living like this,” he said. “I recently paid 102€ to fill my gas tank — a three-digit fill-up! Why are so few mobilizing? The problem is that when we speak with our co-workers they want to know what’s next. They understand that we’re not going to win a 300€/month wage increase with one-day strikes! Why should we settle for these actions with no perspective for going forward?”

The government fears this anger from below more than anything. That fear is what explains Prime Minister Jean Castex’s reaction over fuel prices, which has only resulted in a few crumbs.1Translator’s note: Earlier this week, the French government announced that compensation for work-related transportation would be raised by 10 percent to offset rising fuel prices. On Wednesday, in the business daily Les Échos, columnist Dominique Seux pointed to “an unusual social discontent that worries the highest levels of the state,” evoking the “nearly one-third of teachers on strike two weeks ago, a little more among staff of EDF [a nuclear electric power generation company] this Wednesday, the interprofessional mobilization this Thursday at the call of five unions, and obvious discontent in the hospitals, and temperatures running high in private transport.” He added, “For sure, this beginning of the year 2022 is atypical.”

But while the government is more wary of action in the streets than anything else, the policy of the union bureaucrats is to call for one-day strikes. This approach has already squandered part of the mobilization of national education workers. It’s time to forge a real battle plan, built with the most militant sectors and incorporating the most determined local conflicts, as a way to generalize and extend the anger. Unfortunately, such a perspective seems quite far from that of the union coalition, which will be broadened on January 28 to include other unions in a discussion of next steps for the movement.

Right now, what’s crucial is to build on the best experiences of struggle wherever those take place. That’s the path forward to forge tomorrow’s mobilizations, supported by self-organization and articulating a common program of struggle.

First published in French on January 27 in Révolution Permanente.