What’s Next: Stimulus or Austerity?

Joe Biden will become president at a moment when the global economic downturn poses a critical question for U.S. capital: austerity or stimulus? The answer appears to be federal stimulus and austerity through state budgets. However it plays out, capital calls the shots. 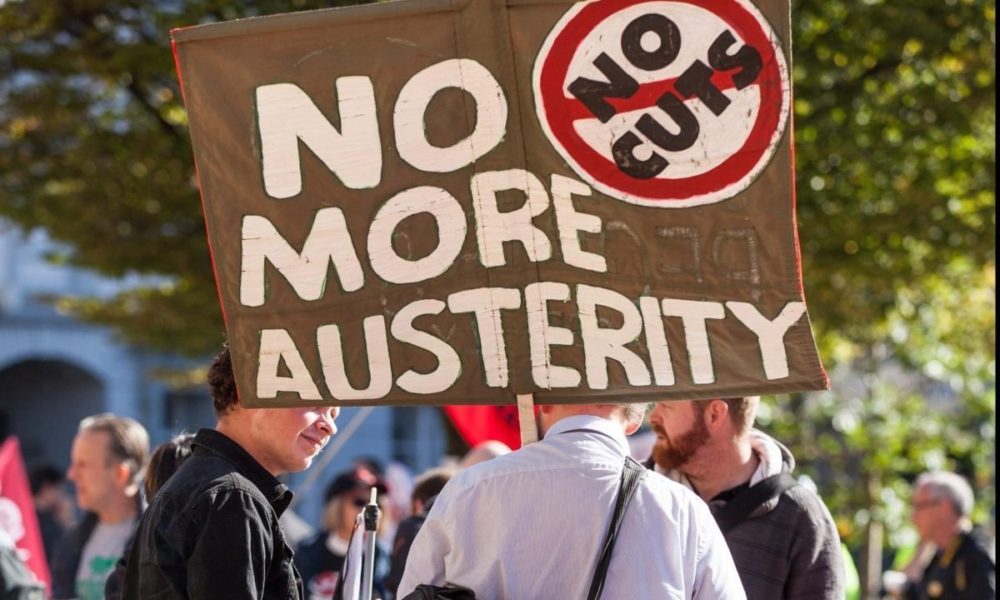 This CNBC headline back in early July speaks volumes: “Cuts to basic services loom as coronavirus ravages local economies and sends states into fiscal crisis.” In the months since, nothing has changed — despite a presidential election. As the New York Times reported in September, states face dire fiscal crises, and “local officials are slashing funding for everything from education and health care to orchestra subsidies.”

The cuts are everywhere, thanks mostly to plunging tax revenues. States rely on taxes to fund their budgets that come, overwhelmingly, from two sources: income taxes, which don’t get paid if people don’t have jobs; and sales taxes, which are not forthcoming if people have little or no money to spend.

“State and local governments reduced spending at a 5.6% annual rate in the second quarter” of 2020, reported the Wall Street Journal. “Moody’s Analytics estimates that without additional federal aid [their] budget shortfalls will total roughly $500 billion over the next two fiscal years. That would shave more than 3 percentage points off U.S. gross domestic product and cost more than 4 million jobs …”

Of course, there’s plenty of money out there to rescue these budgets, but that would mean immediately getting more of it — much more — from the rich corporations and wealthy individuals who pay nothing even close to their “fair share” in taxes. Borrowing is not an option; nearly every state is forbidden by balanced-budget law to run deficits. So, desperation has forced governors to tap into the state “rainy day funds” they use as cushions for tough times, but they’ve “been wary of using all their reserves this year” because “next year could be worse, and hurricanes, earthquakes or other natural disasters could strike at any moment.” They know the situation will only get worse, as a recent Center on Budget and Policy Priorities report makes clear:

Due to the economy’s rapid decline and uncertainty about its future path as well as possible federal aid, official state revenue projections likely do not yet fully reflect the unprecedented fiscal impact of the coronavirus pandemic. Executive and legislative fiscal offices in many states are analyzing new economic projections and producing initial estimates of the damage before state legislatures meet in regular or special sessions to address shortfalls. Most states have released estimates but they may change before state legislatures meet again later this year or in January. … State estimates show that revenues for the current fiscal year, which began on July 1 for most states, could fall as much as or more than they did in the worst year of the Great Recession and remain depressed in following years.

The cuts across the country thus far are wide and deep. The National Conference of State Legislatures indicates that they touch just about every area of spending. Social safety nets are a key target.

Among cuts in spending on K–12 education in almost every state, Alabama slashed $300 million from its schools, including teacher pay raises; Georgia’s cuts are more than triple that at $950 million; New York State reduced state aid payments to school districts by 20 percent; and Tennessee eliminated a planned pay raise for teachers. Higher education has fared no better: California cut $1.7 billion from public colleges and universities, and Missouri, with its much smaller system, cut $122 million.

California has reduced public housing programs by $248 million. Hawaii chopped $49 million out of social service programs, such as child protective services and childcare. In what may be the most ironic cut of all, Florida’s governor vetoed $28 million for an infectious disease drug treatment program — in the middle of a global pandemic.

Then there are the direct attacks on state workers. Several states are furloughing workers regularly: two days each month in California, for instance, and two days every pay period earlier this year in Michigan. New York State has already deferred pay raises for 80,000 government employees three times. New Jersey’s governor is trying to defer payments into public worker pensions.

Prospects for recovery are not good because of the situation with jobs.

The employment situation has seesawed since the pandemic began. Between April and October, temporary layoffs ended for 14.9 million workers — representing most of the virus-related layoffs — as the economy was “reopened.” However, upwards of 3 million workers were let go permanently. The “new hires” during those same months, touted by Trump at every turn, largely reflect recalls of laid-off workers, according to a study by labor economists. “About 33 percent of the employees put on furlough in March were laid off for good by July,” the Washington Post reported in late August.

Underneath all these data is a simple fact: job growth has slowed every month since June, according to the Federal Reserve of St. Louis.

In short, prospects are that this slowdown will continue as deeper recessionary trends rear their ugly heads. In fact, as the Washington Post reports in the past few days, “President Trump’s single term in office is poised to end with apocalyptic job losses.”

Permanent layoffs are certain to grow. The Washington Post continues: “Well over a million workers are still being laid off or fired each month.” And official government numbers don’t even include “about 3.7 million workers who have quit working or looking for work entirely since February.” They’ll only be added to the total unemployment numbers if they start looking for work again.

A Formula for “Relief”

What will the new Biden administration do? It may be instructive to review what Barack Obama did in 2009, when he inherited an economic crisis that had begun the year before and became the global Great Recession. There were big bailouts of banks and the automobile manufacturers, but little support from Washington to state and local governments — which ended up slashing their payrolls.

They need help again. States and localities need federal money to make up for the shortfalls that are already causing massive cuts in social budgets. The capitalists overall are also facing a shortfall — even if some individuals among the mega-wealthy are raking in profits from the pandemic. Their global supply chains are being ripped apart in the crisis, and they desperately need the global economy to come back strong in 2021 to reverse the battering it has taken from Covid-19. But just last month, the International Monetary Fund (IMF) largely surrendered any hope for that scenario, downgrading its forecast for next year and warning about “A Long and Difficult Ascent” — the subtitle of its World Economic Outlook report. The IMF’s chief economist called it a “calamity.”

What to do? Economic conditions today challenge the capitalists’ rate of profit and their ability to expand and build on the exploitation that lies at the heart of their system. Their first thought isn’t how it might be affecting workers, especially those who depend on the paltry social safety net here in the world’s richest country. In 2008, they got bailouts while millions of people lost their homes in the subprime mortgage crisis. And leaving the public sector in a state of such weakness is part of why the global economy has still not dug out from the Great Recession.

But capitalists aren’t averse in principle to putting government money directly into the pockets of workers. That’s because they know what we often forget: the government actually has no money of its own. Those stimulus checks earlier this year that (barely) kept some people afloat came out of the U.S. Treasury, and every cent of that money was already ours. Unless it prints new money, federal government funds — and those of state and local governments, for that matter — are overwhelmingly what has been collected from the vast majority of people, the working class. As New York Times columnist David Leonhardt has pointed out by the numbers, the wealthiest pay taxes at much lower rates than the rest of us. And we don’t enjoy any of the numerous loopholes that have been established to help them get away with paying less and less and sometimes even zero.

Capitalism suffers when we lack money for necessities and a bit of discretionary spending — rom an occasional night out, say, or at this time of year, holiday gifts. Wall Street backed Joe Biden because it expects him to stimulate the economy — something Trump and McConnell have failed to do after the CARES Act earlier this year — by giving us back some of our own money from the big, virtual vault in Washington. Then we can go out and spend it — which means give it to the capitalists. It’s a partially updated version of the old company store system in mining towns: Peabody Coal pays a pittance to the miners and owns the only store in town where they can buy what they need — of course, at inflated prices — and recycles those wages right back into its own bank accounts. It collects rent on the miners’ houses, too.

Today’s version is even better for capital. Mr. Peabody doesn’t have to spend a cent out of his own pocket.

Big capital is counting on the incoming Biden administration to “stimulate” the economy with some direct “relief” to the suffering working class — or at least try, in the face of Republican recalcitrance. As the Associated Press puts it, “A package of $1 trillion to $1.5 trillion would add as much as 4.5% to growth next year … enough to return the economy to its pre-pandemic level by the end of 2021. Most economists note that the economy’s painfully sluggish recovery from the 2008–2009 Great Recession was due in large part to government spending limits that took effect in 2010.”

In a November 10 press conference, Biden called on the Trump administration to get busy on a stimulus package before he takes office. “People need relief right … small businesses, people who are about to be evicted from their homes because they can’t pay their mortgage, unemployment insurance,” he said. And he called for help to state and local governments so they won’t have to lay off cops and firefighters.

Biden’s initial plan is for another round of stimulus checks to be sent directly to families, but it is still excluding undocumented workers and tens of millions of other workers Trump left out. He wants an extension of unemployment benefits with bonus payments, as well as larger Social Security payments — all paid from federal funds that are already our money. He’s contemplating some kind of Executive Order to forgive a portion of student debt, as well as more money for small businesses and emergency sick leave for some workers. All this will ultimately be decided by the bosses, through the representatives they own in Congress.

But what about austerity, which “equals human suffering” — as Jared Bernstein, Biden’s chief economist when he served as vice president, put it? “Such suffering will not be equally distributed. It will fall on those most vulnerable to the coronavirus and the economic damage it has unleashed.”

Capitalism faces a worsening recessionary crisis across the globe in 2021. The Trump administration — aided by Mitch McConnell in the Senate — has run up the federal deficit to a once unthinkable level. Biden seems to be all in on stimulus, but there’s little question that we are going to get austerity as well. Wall Street didn’t back Biden without expecting the full package of what it wants and needs to minimize capital’s suffering in a crisis.