Many historians trace the first environmental protest back to the late 19th century in Spain. It is a largely forgotten story, but one that resonates today. 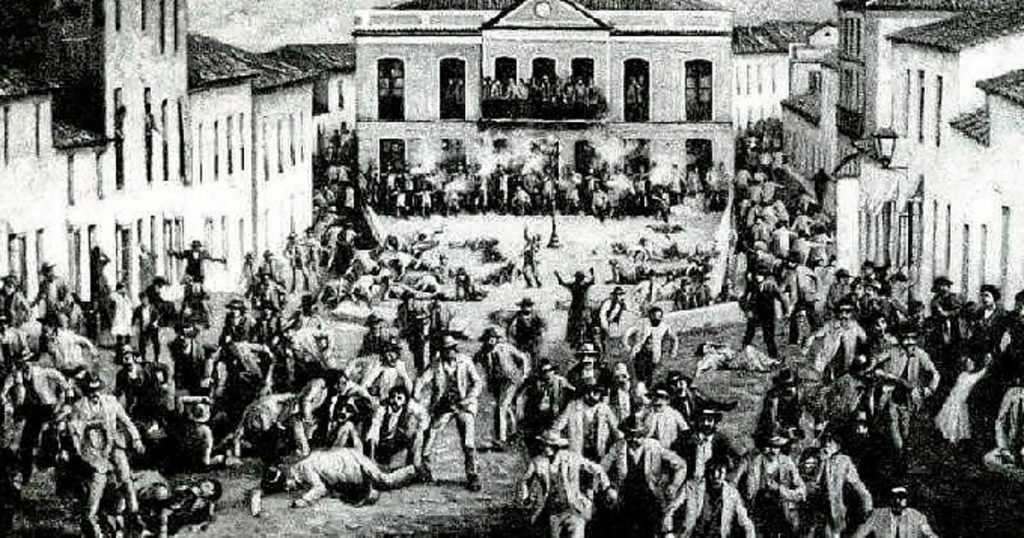 On February 4, 1888, the small southern Spanish town of Rio Tinto (Huelva) was the scene of a massive mobilization of agricultural workers and miners and their families. They demanded three things: a wage increase, a reduction of the working day, and the prohibition of open-pit burning of minerals. In this copper-producing area, the smoke generated by the method of extraction was making them sick — and killing them.

The government repression unleashed on the community made 1888 known locally as El año de los tiros — the year of the shootings.

Although the area’s mines had been exploited since the end of the 1700s, the techniques in use in 1888 had been perfected over a century to increase the use of the material. To extract copper in its pure state, hundreds of tons of ore were placed in large, cone-shaped piles under branches and wood that was set on fire and could burn for six months to a year without being extinguished. This generated massive amounts of gasses and toxic smoke.

The amount of ore extracted, as well as the gasses emanating from it, increased considerably when in 1873 the government handed over the mines to the Rio Tinto Company Limited — which was largely funded by foreign capital, primarily English and German. Among the latter, the famous Rothschild family of bankers was particularly influential.

They caused a dense fog and general asphyxiation, but no official deaths. These were disguised under the heading “death by lack of life,” a curious way of camouflaging the disaster. The open-air calcination of ore also brought the first acid rains in Spain’s history. The result was palpable in the Rio Tinto mining basin: ruined crops and unproductive soil, not to mention the excessive felling of trees to ignite the burning of the ore.

On top of this, the working conditions were deplorable. Workers toiled through 12-hour days, from sunrise to sunset, with no ventilation and miserable wages. The mine employed children as young as 10 years old, who moved through the pits alongside the adults. The reddish smoke caused illnesses and deaths from respiratory and digestive causes, affecting not only the workers but also people in nearby towns and even the neighboring province of Seville.

Faced with protests and unrest in the towns, the government summoned specialists in geology and medicine, who under the auspices of the company denied that the gasses were harmful to health. “The company was not just a company,” wrote Moreno. “It was synonymous with the established power and managed the provincial politics of the time at its whim. It had judges, parliamentarians, and governors on its payroll.”

On February 1, 1888, about 4,000 miners went on strike, which spread over the following days. Cuban-born anarchist miner Maximiliano Tornet was one of the leaders of the struggle; he had been fired some time before for trying to organize his co-workers in a union.

The mining struggle was combined with protests by agricultural workers and some rural landowners, who were being affected economically by the growing environmental contamination. On February 4, thousands mobilized with their families to demand better working conditions and an end to the open burning of minerals.

The government’s reaction was swift. It sent in military forces to repress the demonstration, which according to various sources had gathered some 12,000 to 14,000 people. The official version of events reported that 13 people were killed, while demonstrators testified that 200 people were gunned down.

Social and media pressure forced the prohibition of open burning through a royal decree. However, the business lobby succeeded in repealing that law two years later, reestablishing the extraction conditions. The bosses argued, again, that the sulfuric gasses had been found to be non-toxic to human health and the environment; meanwhile, they persecuted and fired the most militant miners.

The events at Rio Tinto became known as the first environmental protest in history, and who was there to lead it? It was the working class, together with the local community, suffering from the pollution in their own flesh: in their bodies, in the water, in the soil.

These events of the past point today to those who deny climate change and minimize its environmental consequences, and to those who benefit from the extractivism that destroys territories and entire populations.

The Rio Tinto Corporation, in its modern version, is a conglomerate of English and Australian capitals. It is the world’s second-largest mining company, and is responsible for three decades of pollution in Papua New Guinea, where it has today’s largest open-pit copper mine. The company is also responsible for having destroyed 46,000-year-old archaeological sites in Australia. It is the same multinational that will exploit a huge lithium deposit in the Argentine province of Salta.

The story of the Rio Tinto miners is just one example of the working-class tradition of fighting for its trade union and political rights, and also of opposing the destruction of the environment by large multinational companies that prioritize profits and capitalist business over the lives of people and the planet we inhabit.