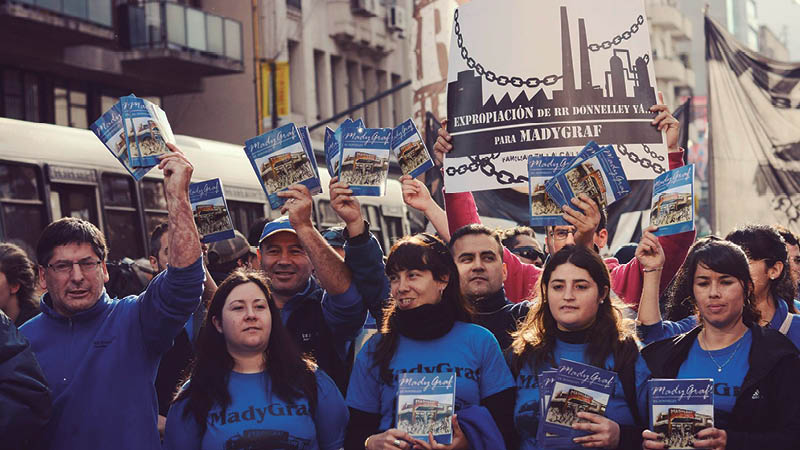 The Donnelley factory north of Buenos Aires is Argentina’s biggest printing plant, producing high-gloss magazines for international clients. But it no longer belongs to the Chicago-based Donnelley corporation. On August 12, 2014, the factory’s workers took it over, and since then they have continued production under their own management, transformed the old factory into a cooperative called Madygraf.

The occupation came in response to management’s plans to fire 123 of the plant’s 400 workers. But this was possible only as the result of a long process of organizing within the workforce.

One important step in that process was the fight to defend the rights of a trans colleague. The bosses had a sexist policy of hiring only men to work the printing presses. One worker was a trans woman, and she had gotten the job only by wearing men’s clothes—a sign of the economic desperation that forces trans people to choose between making enough to survive and being able to express their identity. When she came to work in her normal clothes for the first time, the bosses objected. They tried to prevent her from using the women’s bathroom (which was reserved for white-collar workers), and they forced her to change with the men.

The workers’ council sprang into action, arguing against anti-LGBTI prejudices in an assembly which voted to support their colleague’s right to express her gender identity. Donnelley had no changing rooms or bathrooms for women, so the workers’ council demanded that these be constructed. They also demanded that the trans worker be allowed to use the women’s bathroom.

How was this possible? Why did this mostly male workforce, in a country famed for its machismo, take up the banner of trans rights? This had to do with the formation of a women’s committee in the factory in 2011, as Cinzia Aruzza vividly describes. But the women’s commission itself was the product of earlier political work.

As the socialist feminist Andrea D’Atri pointed out during her speaking tour in Europe,

The example of the Madygraf workers has been the subject of countless academic papers. But most of these papers can’t explain how the factory occupation happened. The simple truth is that this struggle was led by Trotskyists.

A Trotskyist party, the Party of Socialist Workers (PTS), had been working in Donnelley for many years. They built up an anti-bureaucratic, class struggle tendency in the workforce that won a majority on the workers’ council. They defended the principles of class independence, workers’ democracy and feminism. Thanks to years of discussions with Trotskyists, many Donnelley workers understood that to defend their interests, they needed to fight every kind of oppression.

With the victory against their bosses on the issue of trans rights, the workers gained confidence in their own strength and understood the need to act collectively.

Fighting against trans prejudice strengthened the unity of the workforce and prepared them for the fight against the mass layoffs. It does not divide the working class to fight the special oppression that some workers suffer. Quite the opposite: Oppression divides the working class, and the struggle against oppression unites it.

Debates on the socialist left today often make it sound as if the left must choose between defending the interests of workers or fighting for the rights of people who suffer trans oppression. Either/or. But this is not the case. It is when workers are on the forefront of every struggle against oppression that they can effectively close ranks against the bosses—real unity can only be attained on the basis of equal rights.

The Madygraf workers now enjoy an eight-hour workday, higher wages and lasting job security. Many housewives who were active on the women’s commission have now joined the workforce, as the Madygraf assembly decided, ending the previous owners’ sexist hiring policy. The factory now offers free childcare. The women’s commission is now at the forefront of Argentina’s movement for abortion rights.

Above all, the Madygraf workers now control their workplace in democratic assemblies. They can rotate to different jobs around the factory and learn new skills. This does not mean the situation is perfect. Running a cooperative in a capitalist market is always difficult, but more so given Argentina’s economic crisis and runaway inflation.

This is why the workers demand expropriation under workers’ control. The state should take over the responsibility of financing the factory. At the moment, cultural activities like festivals are needed to keep the cooperative afloat.

All this was possible only because a largely male workforce understood the importance of defending a trans colleague. 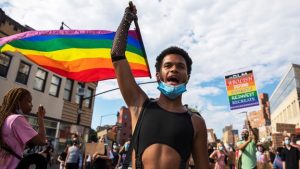