Where is Mexico going?

Recently, Calderón presented a plan up to the year 2030. Before the most “exclusive” of the businessmen, he appeared as a guarantor of stability of capitalist businesses, not only during his term, but for the next … 23 years. The PAN government thus appears as the most organic representative of the reactionary “order” that the monopolies and big businessmen want to establish in the country. This “plan” seeks to guarantee “profound reforms,” that is, a bigger attack on living standards, handing over natural and energy resources to the big transnational corporations, as well as strengthening the state repressive institutions. 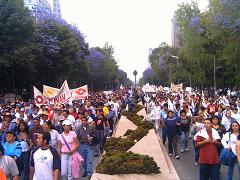 The “armored” government of Calderón

In recent months, the government has implemented a big deployment of
troops, declaring war on drug trafficking. The publicity campaign in
the communications media presents armed forces that protect the
“common citizen.” On one hand, this is an attempt to discipline the
big cartels that have set up a parallel army and bought off broad
sections of the state security apparatus, which reveals the crisis of
the institutions and their ties to drug trafficking. On the other
hand, the presence of the army in the streets threatens to inhibit the
dissatisfaction of the workers, and is a real attack on individual and
democratic freedoms, an attack that inflicts hard blows on those who
struggle.

For this, [Calderón] has the support of the dominant class and the
endorsement of the conservative middle classes, as well as the
strength that the PAN-PRI (Partido Acción Nacional y Partido
Revolucionario Institucional) agreement gives him; these parties
jointly voted in the Mexican Congress in favor of the reforms of the
penal code. The central aim of this policy of Calderón is to
strengthen the capitalist attack and put workers and militant youth on
the defensive.

A reactionary outcome to the struggle

This campaign is neither more or less than a reactionary response by
the regime of the “alternating parties” to the workers’ and popular
mobilization which expressed itself in the democratic anti-fraud
movement and the big struggles of Sicartsa and Oaxaca. And if the
government of Vicente Fox was unable to restrain protest, now his
successor is trying to do that, basing himself on the greater
prominence of soldiers and trying to lose the image of the
illegitimate and weak man who drags along as President, although at
the price of remaining, in actions, a probable hostage of the armed
forces. If Calderón is doing this, it is because the workers’ struggle
continued [even] after the PFP (Policía Federal Preventiva) [major
violent cop thugs] entered Oaxaca. On May 1 and 2, a strong tendency
toward workers’ and popular unity appeared in the streets. And in the
following weeks, the CNTE (Coordinadora Nacional de Trabajadores de la
Educación) [teachers’ union] and university workers continued their
struggle, as they paralyzed UNAM (Universidad Nacional Autónoma de
México) and other schools on May 21, and on June 1, when thousands of
organized workers demonstrated in many states of the country.

These struggles take place in spite of the fact that the leaders of
the UNT (Unión Nacional de Trabajadores) and the SME (Sindicato
Mexicano de Electricistas) did not call the national strike, as the
CNTE proposed. These unions, which pose as opponents [of the
government], could have called the entire workers’ movement, as well
as the rank and file of the industrial unions controlled by the CT-CTM
(Congreso del Trabajo-Central de Trabajadores Mexicanos, to a big
struggle in the streets. It was pressure from the rank and file that
forced them to carry out the civic strikes, as seen on June 1 and May
21, which did not prevent the militant rank and file from disputing
with Agustín Rodríguez (general secretary of the UNT) with a lot of
catcalls. Now educational workers are showing the road of struggle for
the rest of the workers’ movement to follow, as seen in STUNAM
(Sindicato de Trabajadores de la UNAM); a militant vanguard is
beginning to arise, that is debating its leaders and can orient
itself toward a alternative policy. The workers are in the center of
the national stage and of the struggle against the government. The
perspectives are open: if the workers’ movement deepens its struggle
and puts its methods like the strike and mobilization in the streets
into practice, a stage of greater exacerbation of the class struggle
can open up. If this perspective does not become a reality, the
government will then try to deepen its repressive policy and its
plans (like labor reform), to give rise to a more reactionary
situation for the workers.

If, after the struggles that covered the country last year, Calderón
has the strength to put his policy into practice, that is owing to the
way the leaderships of the workers’ and popular movement acted. The
opposition union leaders refused to coordinate the struggles toward a
general strike and, although they carried out joint actions in
solidarity with the CNTE [teachers’ union], unions like the SME did
not fulfill their promise to “flip the switch” (cut the electricity).
In the case of López Obrador and the PRD (Partido de la Revolución
Democrática), when they were on the crest of the mobilizations against
fraud, they prevented these mobilizations from becoming radicalized,
restraining them and calling for trust in the peaceful action of the
“legitimate government” (of López Obrador) and its legislators. And it
is a fact that López Obrador and the PRD are stating that the
opposition should move mainly through institutions.

But we have already seen the result of leading the anti-fraud struggle
that way: Calderón not only governs, he is launching his attack. Faced
with this, we cannot wait to restrain him by relying on the action of
the Congreso de la Unión (legislature) and on a legal system that is
clearly at the service of capitalist interests. Although the
contradictions in the regime (with the PRD and with sectors of the
PRI) may complicate [matters for] the reactionary policies of
Calderón, we workers must rely only on our own forces.