While Brazilians Die, Bolsonaro Continues to Deny the Pandemic

President Jair Bolsonaro of Brazil has gone beyond even Trump in his denialism toward the coronavirus. With Brazil now leading South America in Covid-19 cases, how can the right-wing leader continue to ignore the facts? 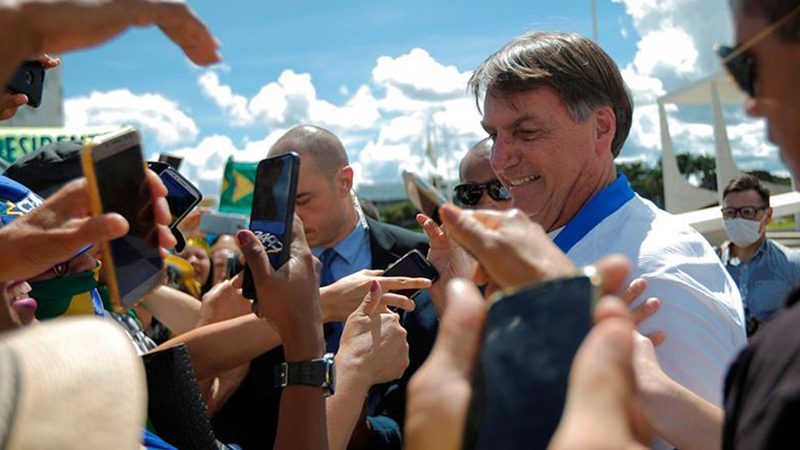 According to the official tally, Brazil is already the South American nation that has been hardest hit by the coronavirus. As of publication, the country has registered over 12,000 COVID-19 cases and over 500 deaths. But with a president who openly calls the quarantines “hysteria” and who has refused to carry out massive testing, Brazil’s true number of sick and dead may be far higher. Brazilian doctors are seeing firsthand the impact of coronavirus in Brazil and are already questioning the government’s figures. The mass graves being dug in Sao Paolo’s Villa Formosa Cemetery — their image recently featured on the cover of the Washington Post — also point to a death toll well beyond what President Jair Bolsonaro admits.

Several sources indicate that hundreds of Brazilians are dying of Covid-19 without receiving a diagnosis or being diagnosed only after death. Isabella Rêllo, an ER doctor in Rio de Janeiro, said in a Facebook post, “What is happening is a huge underreporting. There are MUCH more.” Margareth Dalcolmo, a pulmonologist from the Fiocruz National School of Public Health, declared recently, “there are deaths from Covid-19 that are not being diagnosed.” A gravedigger at  Villa Formosa said, “The numbers in the newspapers are very wrong. The real number is twice as high, maybe triple.” Meanwhile there is a massive backlog of tests, with more than 20,000 people currently waiting on test results.

Bolsonaro’s denialism toward the coronavirus pandemic now surpasses every other major world leader. He has refused to shut down non-essential businesses in the country and has called for Brazilians to disregard the quarantine orders in their cities and states. Last week, Bolsonaro himself publicly defied the social isolation recommendations in place in Brasilia by touring small businesses in the city and taking photographs among small crowds of supporters. He even threatened to fire his Health Minister for refusing to back the president’s denialist line. The consequences of Bolsonaro’s policies are only beginning to be felt. In recent days, the images of dead bodies left in the streets of Guayaquil, Ecuador circulated around the world. Images like these give us only a prelude to the death and devastation to come in Brazil.

The response of the Brazilian president to the outbreak is already eroding support among his traditional base. The cacophony of panelaços, or pot banging protests, can now be heard nightly in São Paulo’s middle-class neighborhoods. The demand of “Fora Bolsonaro!” (Out with Bolsonaro) continues to grow louder as the death toll rises.

The contagion has also made it clear that the Brazilian ruling class is still deeply divided. These divisions became apparent during the country’s economic downturn and the institutional coup d’etat against President Dilma Rouseff in 2015. Bolsonaro has continually used  bonapartist methods to overcome the country’s deep political and social crises. But his management of the coronavirus outbreak has proven him to be incapable of the task. Many of the president’s right-wing allies have broken with him since the outbreak began, and 25 of the country’s 27 governors now say they are rejecting Bolsonaro’s policy. Ronaldo Caiado, governor of Goiás and former Bolsonaro supporter, said, “It’s appalling. You cannot govern a country like this.” Even the arch-reactionary military apparatus has stepped in to defend the health minister from firing by Bolsonaro.

Of course, these figures share the blame for Brazil’s deadly outbreak. Years of austerity policies that the largest capitalist parties fully endorsed have debilitated the health system to the point where it is now incapable of treating the thousands who likely  will suffer from Covid-19. While many on the right now take a more pragmatic position than Bolsonaro by calling for mass quarantines and business closures, the dead are their responsibility too. The Brazilian Health Ministry has said that health professionals, ICUs and hospital beds are all in short supply in the country. However, none are willing to make the necessary incursions into private property in order to secure thousands of beds, ventilators and protective equipment.

The ‘Trump of the Tropics’ Goes Beyond Even His Mentor

The far-right Brazilian president came to power on a program strikingly similar to that of Donald Trump in the U.S. He railed against “political correctness.” He directed the most misogynistic attacks imaginable at his female opponents (one “didn’t deserve to be raped” because she was “too ugly”).  He even decried the “fake news” media outlets, borrowing the English phrase that Trump has been so fond of. It was this profile that earned him the nickname Trump of the Tropics on the campaign trail in 2018.

It was fitting then that the denialism of the American president toward the new coronavirus was emulated by his Brazilian counterpart. In late February, Trump suggested the alarm over the virus was part of a media campaign against him. “We’ve lost nobody” to Covid-19 said the President, yet “the press is in hysteria mode.” Even as diagnosed cases began to rocket upwards, Trump stressed the need to restart the economy by mid-April, stating, “We can’t have the cure worse than the problem itself.” Many of these assertions were echoed by Bolsonaro, who called the deadly disease no more than “just a little flu.” “People should go back to work,” said Trump’s protege in Brasilia.

But with the number of cases exploding in the U.S, even Trump has now been forced to accept the danger of coronavirus, and Bolsonaro stands alone as the only major world leader to resist taking any measures to confront the pandemic. Despite worldwide cases surpassing 1.2 million and mass quarantine orders around the world, Bolsonaro has maintained his opposition again and again to closing businesses and stopping or slowing production in Brazil, declaring that “Brazil cannot stop.”

The Brazilian leader has demagogically claimed that by keeping businesses running, he is defending the country’s poor from unemployment and misery. Yet, he has not even approved minimum monthly payments for the workers left jobless —  nor has he taken any steps to protect workers from infection, raised wages or improved the horrendous sanitary conditions in the poorest sections of the country.

Why Bolsonaro Refuses to Acknowledge This Crisis

Where does Bolsonaro’s extreme obscurantism come from? There are two distinct but interrelated explanations.

To begin with, we must consider Brazil’s role as a large but still subordinate power in the global capitalist economy. In order to continue to compete with other countries on the capitalist periphery, production and exports to the central countries must continue. Bolsonaro’s electoral success was largely a result of his promises to improve the faltering Brazilian economy and restore its status as a regional power. In 2019, Brazil regained its status as the world’s number one beef exporter, passing India, which previously held the title. Therefore, Bolsonaro balked at any measures that would threaten business operations in the country, even in the face of a worldwide contagion. “Put the people to work. Preserve the elderly, preserve those who have health problems. But nothing more than that,” he said about quarantines. In keeping workplaces open, Bolsonaro demonstrates his commitment to the interests of big business and foreign capital.

Equally key to an understanding of Bolsonario’s denialism are the deep ties of the president with the evangelical church. This was recently made clear when Bolsonaro refused to restrict the number of people who could take part in church gatherings, an activity he called “essential” for the country. These leaders of these institutions spread deeply anti-scientific and reactionary views in areas ranging from reproductive education to evolution. Damares Alves, Bolsonaro’s Minister for Women, Family, and Human rights, has bemoaned  “allowing the theory of evolution into schools” without questioning. Alves, a former Evangelical pastor, has also promoted abstinence rather than contraception in her campaign against teen pregnancy, which she has named “I choose to wait.” Bolsonaro has called himself a “proud homophobe” and demanded that references not only to homosexuality but even to reproductive anatomy be removed from educational materials. In this context, it is  not surprising that the Brazilian leader refuses to acknowledge the dire projections made by scientists worldwide about the spread of coronavirus.

A Public Health Catastrophe in The Making

It’s evident that Trump’s deliberate delay in responding to the coronavirus outbreak in the U.S. has led to the present public health catastrophe in our own country, where nearly 12,000 have died since March 1, and tens of thousands more have been hospitalized. In Brazil, these trends are sure to be repeated and may even become more acute. Severely ill patients are already lower in age in Brazil than elsewhere, with the average age between 47-50 years old. This is because the effects of coronavirus are compounded by the many existing health problems in Brazil, including tuberculosis and malaria, in which contamination is widespread and access to clean water and sanitation is limited. In some Brazilian slums, there are nearly 400 cases of tuberculosis for every 100,000 residents, not to mention the terrible housing and sanitary conditions of Brazil’s poorest neighborhoods. Brazil is home to 31 million people without access to clean drinking water and 6 million without bathrooms in their homes.

Combating the Covid-19 crisis in Brazil requires mass testing for those presenting symptoms, universal access to health care and sanitary conditions, and the immediate closure of nonessential businesses, with workers fully paid during closures. However, these are measures that Bolsonaro — a faithful servant of imperialist capital —  has no intention of implementing. But neither is it sufficient to demand Foro Bolsonaro. It is the Brazilian ruling class as a whole, including the anti-Bolsonaro governors, judges and military leaders, who will be to blame for the devastation that’s coming if the country continues on the present course.