Las Vegas Hotels Are Empty: The Homeless Are in a “Socially Distant” Parking Lot

Multiple sources reported today that in Las Vegas, authorities have built a “shelter” for the homeless in order to respect “social distancing.” The images coming out of Nevada, however, tell an entirely different story. 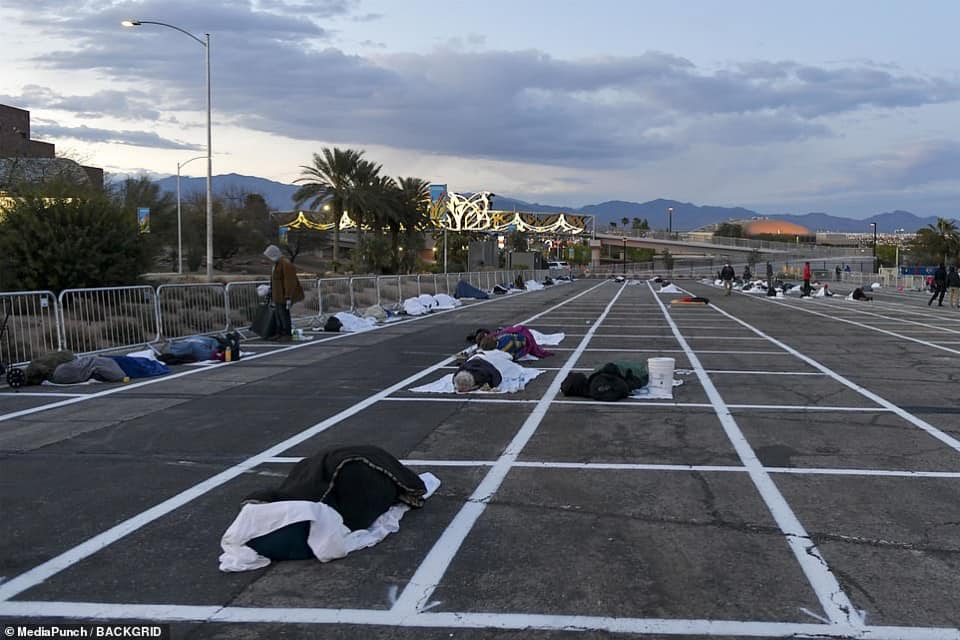 The “shelter” is nothing but an open-air parking lot in which lines have been painted to demarcate spaces for people to sleep. The “social distancing” is a lie — the lines of the grid are much less than six feet apart and are barely large enough for an adult to lay down in. Homeless people are huddled together on the concrete, with no means of protecting themselves from the outdoors or infection.

The outdoor shelter, located in the parking lot of the Cashman Center in Las Vegas, opened Saturday after the Catholic Charities of Southern Nevada shut down after a resident contracted COVID-19. The 500 residents of the shelter were forced out of the shelter into the open air to avoid spreading the potentially deadly disease.

Capitalist hypocrisy knows no bounds. They are leaving these people to die.

About the makeshift shelter, Lisa Morris Hibbler, the Chief Community Services Officer for the City of Las Vegas said: “we have it spaced so that they’re social distancing,” as if these horrendous conditions were nothing out of the ordinary.

Clark County Commissioner Justin Jones also said: “We’re proud to be working in collaboration with the city to meet the needs of our homeless population and appreciate the quick response of the participants in standing up the facility so soon.”

There are over 100,000 hotel rooms in Vegas. The vast majority of these are empty as a result of the pandemic, yet homeless people are sleeping close together on the ground in a parking lot. According to official figures, there are at least 14,000 homeless people in Nevada. There is more than enough room to house them all.

Homeless people are of course among the most vulnerable to the pandemic, but the virus is not the problem. The problem is a system that is organized so that the ruling class is more than taken care of while the working class cannot get social assistance.  Capitalist and government barbarism has never been so exposed.

Unions, workers, and community organizations must demand that the needs of people who are homeless be addressed by emergency measures such as adequate and clean housing; they must be guaranteed food and healthcare in the face of the pandemic.

The capitalists and governments will say there is no money or no space to house these people. But that’s simply not true. We must expropriate empty hotels in Las Vegas and the vacant properties of the rich immediately so that everyone has shelter in the midst of this crisis.