This year, hundreds of Palestinians have been injured in Jerusalem and dozens killed. This is not about “tensions.” This is about Zionist apartheid enforced by brutality against Palestinians. 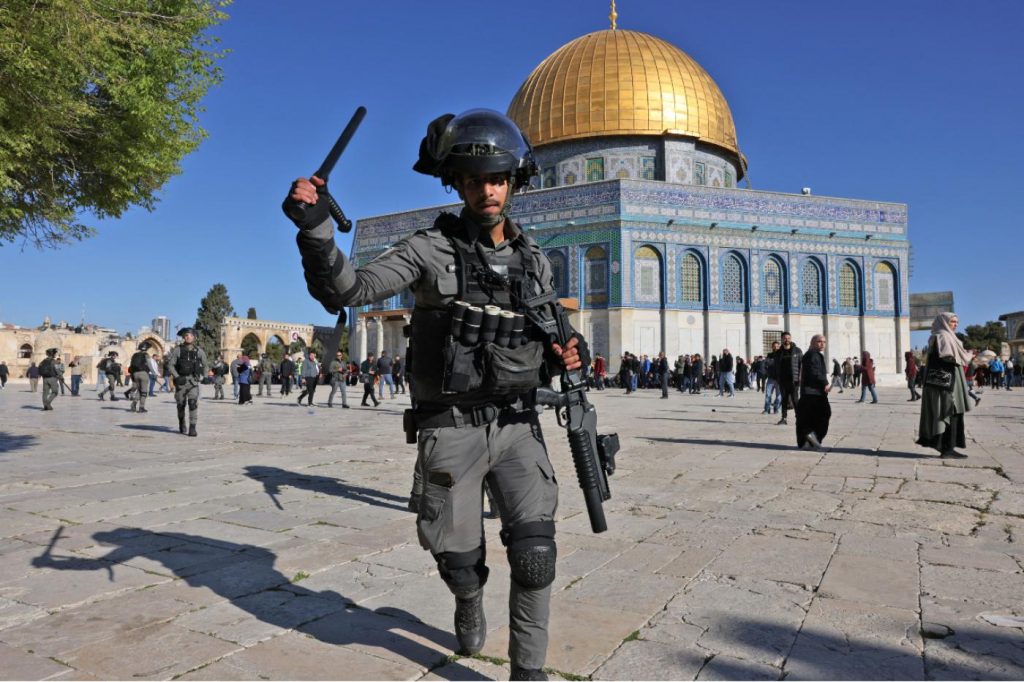 This year, hundreds of Palestinians have been injured in Jerusalem and dozens killed. This is not about “tensions.” The Israeli state legally prevents its Palestinian citizens from getting residency for spouses from the occupied territories, in violation of basic democratic norms. The U.S. Left needs to support the resistance against national and colonial oppression.

During the past two months the Israeli state has undertaken severe repression. On April 15, militarized police stormed Al-Aqsa Mosque in Jerusalem during Ramadan, arresting 450 Palestinians. Israel said its police were defending themselves from stone-throwing.

This was the latest episode in a wave of occupation violence. In the first half of March, Israeli soldiers shot and killed more than a dozen Palestinians in the West Bank, including children. In the first half of April, Israeli forces killed 17 more Palestinians. On April 10, soldiers at a concrete army post shot and killed Ghada Sabateen, a 44-year-old partially blind woman walking back to her home along the main street in the West Bank town of Husan. Three days later, soldiers at the same position shot and killed 14-year-old Qusai Fuad Hamamra. The Israeli military said Hamamra had thrown a Molotov cocktail at the army emplacement.

The Israeli government declares that it is combatting terrorists. In late March and early April, there were four deadly attacks by individual Palestinians in public places in Israel. Three of the attacks killed 11 civilians. The other killed two Israeli Border Police. Two attacks were carried out by Palestinian Israeli citizens, two by West Bank residents.

The New York Times called the arrest of 450 Palestinians and takeover of Al-Aqsa “clashes,” but said that “calm had returned” to the mosque after the mass arrest. The Times also said that violence had “escalated” after the four attacks against Israelis and suggested that killings by Israeli troops in the West Bank were “prompted” by those attacks.

In defiance of the occupation forces, 150,000 Palestinians gathered again at Al-Aqsa on the next Friday, April 22. Israeli police invaded again, injuring 31 Palestinians, including three journalists.

Israel is an officially discriminatory state. Its border regime and citizenship law violate minimal liberal norms of equal rights. Israel annexed East Jerusalem after 1967, but the vast majority of the 350,000 Palestinian residents there do not have Israeli citizenship, only residency, which can be revoked. On the other hand, the 2 million Palestinians living in Gaza, 141 square miles in area, are physically prevented from leaving that territory. Half a million Jewish Israelis live in settlements in the occupied West Bank, retaining citizenship and voting rights, but West Bank Palestinians can enter Israel only with military permission.

On March 10, the Knesset (parliament) renewed the Citizenship and Entry Law (CEL) by a 45-to-15 majority. Since 2003 the CEL has blocked Israeli citizens, namely the one-fifth of citizens who are Palestinian, from obtaining Israeli citizenship for their spouse if they marry a Palestinian person from the West Bank. Spouses from Gaza have been banned from living in Israel since 2007.

Palestinian Israeli citizens or East Jerusalem residents who marry or wish to marry “foreign” Palestinian partners do not even have the right to extend permanent or guaranteed residency to them. Under an amendment to the law, such spouses may apply for government permission to live in Israel with their partners if, and only if, they are above the age of 25 for wives and 35 for husbands (treating all young adults as terrorism suspects). In 2011, the Israeli Interior Ministry granted 1 percent of such requests. About 9,000 of 13,000 such married couples currently living in Israel have only one- to two-year “stay permits” for the noncitizen spouse, which must be frequently reapplied for. Most of the others have temporary residency visas. Often, the noncitizen spouses are ineligible for national health insurance, and many do not have legal permission to work.

Access to citizenship for foreign spouses of citizens, while restricted and policed, is legally provided for in almost every state in the world. The CEL also applies to Lebanese, Syrian, Iraqi, or Iranian spouses. In contrast, Jews from any country are offered immediate Israeli citizenship under the settler-colonial Law of Return. Non-Jews immigrating to Israel together with their Jewish spouse also receive immediate citizenship. Most non-Jewish foreigners who marry Israelis can immediately reside in Israel and easily apply for naturalization after five years. Jewish settlers in enclaves inside the West Bank hold citizenship and can freely marry citizens within the main territory of Israel. Reuters reports that the CEL “forc[es] thousands of Palestinian families to either emigrate or live apart.” Obviously, this threatens to separate children from one of their parents. Shockingly, because the Israeli state does not offer civil marriage and recognizes only marriages performed by the Orthodox rabbinate or the Muslim, Druze, or several Christian clergy bodies, all interreligious and all gay couples wishing to legally marry must travel to another country and register their marriage when they return.

When the CEL was enacted in 2003 during the Second Intifada (uprising), Gideon Sa’ar, who is today minister of justice, argued in the Knesset, “We are at war with our neighbors, the Palestinians.” Another MP, Yuval Steinitz, called cross-border Palestinian marriages “a deliberate strategy … to change the demographic balance in Israel in order to destroy us.” The Israeli government claimed that the CEL was a temporary measure for self-defense against terrorism, and the Israeli Supreme Court later narrowly upheld it as compatible with civil rights. It was renewed annually until Benjamin Netanyahu’s Likud Party, which had lost office, temporarily blocked renewal in July 2021 (although it supports the law and wishes to make it permanent) in a stunt to embarrass the new government of Prime Minister Neftali Bennett and Foreign Minister Yair Lapid.

Lapid tweeted that the law’s “essence” is that it will “ensure a Jewish majority in the state of Israel.” Nine of 11 cabinet members supported the CEL and got it through the Knesset in March.

The CEL makes utterly clear the ethno-nationalist and discriminatory nature of the Israeli state. President Joe Biden has maintained the enormous U.S. imperialist support for this regime. And even one of the Democratic Socialists of America (DSA) Democratic congresspeople, Jamaal Bowman, met amiably with Bennett and Lapid in November 2021 — at the very same time that they were working to renew the CEL.

The Zionist state must be overthrown by the Palestinian masses, with help from the working classes of neighboring Arab countries and support from the international Left. It must be replaced with a democratic, secular, socialist state in which Arabs and Jews can live together and both have full civil rights. This includes abolishing the Zionist borders partitioning Palestine and establishing the full Right of Return for the millions of Palestinian exiles.

The U.S. Left will never succeed if we sell out Palestinians while striving to form a pressure group within the Democratic Party and the U.S. government. Socialism can only be created by what Trotsky called “an awakening of human personality in the masses — who were supposed to possess no personality.” Publicizing the dignity and resistance of oppressed people and the facts of their oppression, rather than making political accommodations with oppressors, is indispensable for international working-class action.

Left-wing workers organizing to push back against our exploitation by Amazon, Starbucks, and the rest of the U.S. capitalist class need to call out everything happening in Palestine in solidarity with the Palestinian masses, not accept “Left” politicians seeking serviceable apologetic things to say while participating in government meetings maintaining imperialist alliances. Congressional offices do not have the magical power to change society. Real power comes from radical honesty about social relations. Only if we have that can increasing numbers of workers develop the conviction to fight capitalism and oppression where we live and internationally. It is no coincidence that Palestine has shown more strikingly than any other issue the debilitating effect of Democratic Party electoralism.