Who is to Blame for Betsy DeVos?

On Tuesday, Betsy DeVos was confirmed as Secretary of Education. She is entirely unqualified and seeks to dismantle public education as we know it. Who is to blame for her confirmation? 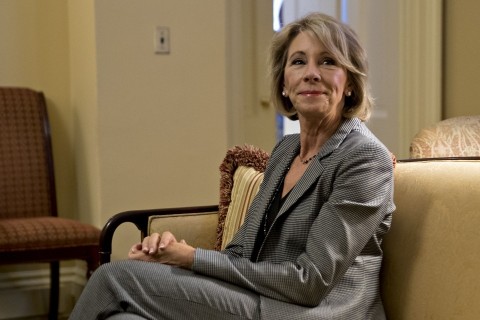 Betsy DeVos is, without a doubt, the least qualified, most anti-public school person to ever be nominated as Secretary of Education. Never having worked in, attended or studied in public schools, her only education-related experience is in lobbying to dismantle public education. The New York Times reported that DeVos is a lobbyist who used her money to buy influence in education- an education system that she has in no way engaged with at any moment of her life as a student, an academic, a teacher or a parent. DeVos heads the pro-charter and pro-school-voucher “nonprofit”, the American Federation for Children, that espouses choice as the solution to education: all parents can choose; all parents know what they want in their children’s education. DeVos’ model expands charters and siphons public dollars to private schools. Her new position as Secretary of Education will allow her pro-voucher policies to expand to the federal level.

During the Senate hearings, she was unable to answer basic questions with regard to the management of public education and testing. She defended guns in schools, arguing that they were needed to defend students from grizzly bears. Her written statements to the Senate included plagiarized sections from Principal Deputy Assistant Attorney General Vanita Gupta, head of Obama’s Civil Rights Division at the Justice Department.

Who is to blame for her confirmation?

Clearly, we must begin by blaming Trump and the Republican party, which, despite DeVos’ clear ineptitude in regard to public education, pushed through her nomination. Even though DeVos clearly knows very little about public education, she will push a pro charter, privatization agenda. This is good enough for most Republicans. However, DeVos’ confirmation was not pushed through without fissures within the party, with two Republicans breaking with party line to oppose DeVos.

Yet, we must also blame the Democratic Party who furthered the pro-charter agenda in public education. Race to the Top, a program begun by the Obama administration in 2009, made states compete for federal education funds based on their implementation of two primary initiatives: spreading charter schools, and introducing merit pay for teachers. In calling out “Obama`s Neoliberal Agenda” (2009) education theorist Jean Anyon puts the problem in no uncertain terms, saying, “The privatization built into NCLB and Race to the Top accelerates the 20th century trend towards shaping public education in the interests of corporate concerns”. Betsy DeVos’ program is a continuation of this trend, not a break with the Democrats’ education policies.

Furthermore, the Democrats did not put up an effective movement to fight DeVos. The Democrats spent days delaying DeVos’ confirmation, attempting to negotiate backroom deals with Republicans. In the last 24 hours, the Democrats spent a day and night holding the Senate floor in a highly symbolic act of resistance to DeVos’ confirmation. This is the same Democratic party that agrees with many of DeVos’ positions, as they advanced charters and privatization for years.

Democrats encouraged people to oppose DeVos by calling their Senators, a strategy that thousands embraced. So many people called their Senators that it became impossible to get through. Phone lines were jammed for days as people expressed their disgust with Trump’s cabinet pick. This demonstrates an immense will to fight in the wake of the millions who took the streets at the Women’s March on Washington and the airport protests.

The jammed phone lines is a stark contrast to the symbolic but ineffective action the Democrats took, sitting alone in the Senate all night. A more effective way to resist DeVos? Ask those thousands of people who called to oppose DeVos to take the streets all across the country. Organize a “Day Against DeVos” or a “Rally for Public Education” the weekend before the confirmation– mobilize people to show that they will not only jam the phone lines, they will jam the streets to fight against DeVos and her privatization project.

Another central actor that refused to mobilize people and is therefore partially responsible for the confirmation of DeVos, are the teachers unions. The unions unilaterally came out in opposition to DeVos, and yet they refused to mobilize teachers in a united action against DeVos. Randi Weingarten, the president of the American Federation of Teachers, called Ms. DeVos “the most ideological, anti-public education nominee” in the history of the United States. If this is the case, they should have used all of the weapons in their arsenal to fight DeVos’ nomination. The leaders of teachers’ unions must stop trusting in the Democratic Party if they really want to fight DeVos and the attacks that are to come. They must instead trust the strength of teachers as workers and in unity with the entire working class that will be attacked by the new administration. They should have called teachers to take the streets; they should have urged teachers to walk off the job alongside students, striking to express disgust with DeVos.

The age old strategy of calling your Senator is impotent, as demonstrated by DeVos’ confirmation despite public outcry. These are extraordinary times of deep right-wing attacks and they require extraordinary measures. Saving American public education will require mass mobilizations in the streets and the organization of teachers as workers.