On Tuesday morning, two police officers murdered Alton Sterling in front of a convenience store in Baton Rouge, Louisiana in cold blood. Footage of the murder quickly circulated and people have begun to protest in the streets. Numerous local and federal agencies have stepped in. 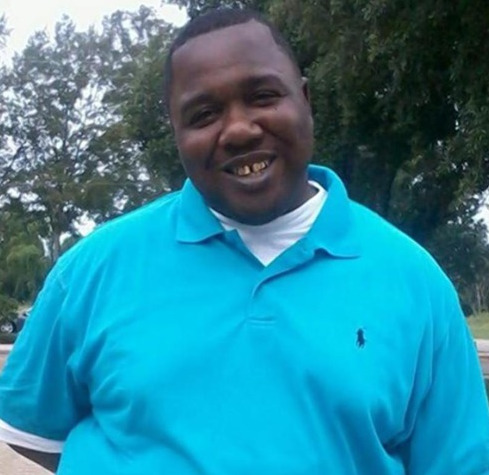 Two cops didn’t throw him wheeling to the ground, crushed against the front bumper of a car. “Multiple gunshot wounds” didn’t bleed him to death.

Black blood on black pavement. Black screams behind the camera. Disbelieving and knowing.

Tuesday 12:35 am: Cops Blane Salamoni and Howie Lake arrive at the store looking for somebody–a body to fit their description. They find Alton Sterling, 37, called father by five, black in America.

We watch the footage and our blood turns to ice, then fire at the sounds of Sterling’s shouts. This heat we’ve known before. Eric Garner. Rekia Boyd. Sandra Bland. Michael Brown. Tamir Rice. Jamar Clark.

One white Baton Rouge cop didn’t end Alton’s life. The system did. Stomping out a story, twisting the stake in a people and community. A man with a son who can’t speak through his tears. A man whose wife, Quinyetta Mcmillon, presses out words of rage before hungry cameras:

“I have now been forced to raise a son who is going to remember what happened to his father. That I can’t take away from him. He is at an age of understanding. I hurt for him and his loss. As a parent one of the greatest fears is to see your child hurt and know there’s nothing you can do.”

Well-oiled racism employed by the state, at the service of class war. Took more than 550 lives so far this year. Murder is the mundane business of a cop in America, where polished guns, pressed uniforms, handcuffs, attack dogs are just tools of the trade to keep the people down, subservient, afraid. To keep the oppressed in check.

Words slither from Gov. John Edward’s lips: Alton Sterling’s murder, “disturbing to say the least.” He makes routinary promises. Those who have been watching, those who know police murder of Black lives reigns as a social rule are not fooled. These lies, spoken by chest-puffed prosecutors and functionaries, are as constant as the rising count of Black lives, Black lights extinguished.

We know how it works. In Chicago, Rahm’s government sat on evidence of the police execution of Laquan Mcdonald for over a year. In New York, a grand jury secured Daniel Pantaleo’s freedom after he squeezed Eric Garner’s last breaths from him. The cop who shot down Tamir Rice in a playground faced no indictment at all.

The Federal government has already stepped in gallantly to begin a “thorough” and “impartial” investigation. The same people, the same two parties, prosecutors, and courts that keep over 2.2 million behind bars will never be the champions of our liberation. Democratic Party officials, the legal system that criminalizes Black and Brown, immigrant and queer, working class and poor communities will not do an about-face today for Alton Sterling.

They will drown us in lies to disappear our rage, prevent us from rebelling, and secure the patency of a system riddled with cracks and savagery.

The Democrats who have presided over the execution and imprisonment of Black people will use Sterling’s murder to feign ignorance and innocence to the murder of Black people. Cynically, they abuse the banner of “civil rights” and begin their prosecutorial fencing, in hopes of making points for the upcoming elections.

The Department of Justice, FBI, State’s Attorney, and even the pigs are grabbing up this case. The system is enacting its preemptive war against the working class. Because Power glimpsed power when Black youth split open Baltimore’s streets last year.

The government puppets, compradores, and liberals will don their suits and drag us to the courts to mire us in debates over whether the police were “fearful for their lives.” Here, we encounter the poison to our movement. The courts: good for turning our rage inward to rot, for exploding our fury into millions of scattered pieces. There, any chance of a conviction rests on the power of the movement. But even if a cop is sentenced, white supremacy and capitalism will never be put on trial.

The destruction of the police will be because of thundering mobilizations, street blockades, work stoppages, strikes that stretch beyond Baton Rouge to every corner of the country.

We will not hold onto any faith in the courts. We will not stay home, or heed their calls for “calm.” Justice is not possible in this system. Instead, we must rise up and take our justice in the streets, begin a movement that can raise a new system based on the logic of equality and liberation.

Last night, hours after Alton Sterling was killed, some 150 people protested in Baton Rouge, voices choked, fists raised high, “Fuck the police.” As with Baltimore and Ferguson, we look now to see if Baton Rouge will catch fire. And the rest of us–we will throw our petrol-fury into the flames, for an end to the count of Black lives consumed by this system.