Who Will Pay for the Crimes in Flint? 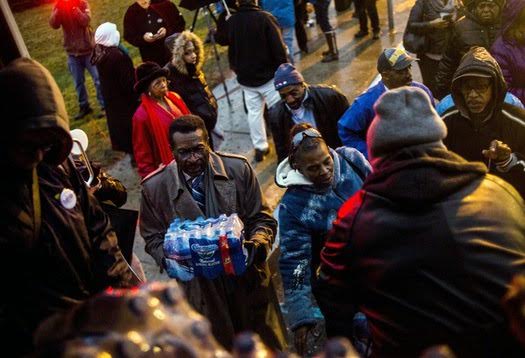 In April 2014, in a cost-cutting measure, city officials in Flint, Michigan switched the city’s water supply from Lake Huron to the Flint River. Soon afterwards, residents began to report brown water coming from their taps with a foul odor and taste. The problem, as documented by researchers from Virginia Tech University, was that the water from the Flint River was highly corrosive and was eating away at the lead-based service lines. At the same time, it was discovered that the state of Michigan had broken federal law by failing to install a corrosion control system, which could have prevented lead from seeping into the city’s water supply.

Located in central Michigan, Flint is a majority black city where poverty is widespread. It is no wonder that many have compared this crisis to the crisis in New Orleans after Hurricane Katrina a decade ago. Once again, a disaster has hit a community already wrought by years of suffering and neglect. And again, those who will feel the effects of this catastrophe the longest are people of color and the poor.

The consequences of the switch

Since the spring of 2014 when the city’s water supply was changed, there have been at least 43 reported cases of elevated lead levels among Flint residents. An estimated 9,000 children have been exposed to lead-poisoned water. According to a study by Flint’s Hurley Medical Center, reported cases of lead poisoning have just about doubled since the switch. Several parents have already reported children suffering from rashes and headaches. But the potential long-term effects of lead poisoning are far more serious, ranging from developmental disorders to hearing loss to brain damage. The effects on the brain are irreversible.

Researcher Marc Edwards from Virginia Tech called one home he inspected in Flint the “worst lead-in-water contamination that we’d seen in 25 years.” The home belonged to resident LeAnne Walters a mother of 4-year-old twins who both tested positive for elevated levels of lead in their blood.

Lead poisoning has not been the only danger to Flint’s residents. From June 2014 until November 2015, there were 87 reported cases of Legionnaire’s disease, a severe form of pneumonia caused by a bacterial infection in the lungs. Ten Flint residents have died as a result of the outbreak. Although city officials continue to deny a connection between Legionnaire’s and the water crisis, the spike has been impossible to ignore. In the previous four years combined, there were only a total of only 17 cases in Flint. Other dangerous bacteria like E coli have also been found to be present in the city’s water.

On Saturday, Obama finally declared a state of emergency in Flint, more than six months after doctors reported alarming levels of lead in the blood of the city’s children.

At the center of the Flint scandal is Michigan’s Republican Governor Rick Snyder, who appointed the officials responsible for the switchover. In 2011, Snyder signed into law new legislation that allowed the governor’s office to hand pick “emergency managers” for cities, towns, and even school boards experiencing “financial emergencies”. These unelected officials have the power to renegotiate contracts, remove elected officials from office, and even change public policy. Incredibly, the same official responsible for switching Flint’s water supply, Darnell Earley, is now the emergency manager for Detroit’s Public School System. Snyder has admitted to “failing” the city’s residents, stating “I’m sorry and I will fix it…” Nevertheless, Snyder has refused to resign despite widespread calls for him to do so and most likely will never be prosecuted for his role in the health crisis.

Snyder and Earley were hardly the only ones responsible for the catastrophe in Flint, however. Flint’s mayor at the time, Democrat Dayne Walling applauded the switch when it was made and called the Flint River source “regular, good, pure drinking water.” Today, more than 100,000 residents are unable to drink water from the tap. Local and state politicians claim to have been unaware of the dangers that the new water source posed. Yet, as far back as October 2014, General Motors declared that it would not be using the city’s water at its auto parts plant given the high level of corrosiveness of the water. In January 2015, it was clear that city officials knew there were major problems with the city’s water supply after they warned residents about high levels of disinfectant in the water — chemicals that were used to fight bacteria — but claimed the water was still drinkable. A month later, an EPA investigator, Miguel Del Toral emailed the Michigan Department of Environmental Quality to alert the agency of the high levels of lead and the danger posed to the people of Flint. However, Del Toral’s superiors at the EPA buried the memo, claiming it was only a draft that was not supposed to be made public. That message was echoed by Mayor Walling, who had also reviewed Del Toral’s findings.

Federal law also required the city to conduct water sampling at homes with lead service lines. Instead of following this protocol, city officials conducted testing at the lowest risk sites and falsified their records in an effort to downplay the risks of the switchover.

So it is unquestionable that city and state officials knew about the dangers posed to the city’s water supply, and did nothing to remediate the problem. Even more disturbingly, they covered up their actions, in order to avoid news of the contaminated water being made public. What remains to be seen is whether any public official will be prosecuted and jailed for their crimes, which have likely resulted in permanent harm to dozens of children, and may already have caused 10 deaths.

The decline of Flint and Detroit

Flint is a city of 100,000 which has experienced a complete economic collapse since General Motors began closing the majority of its plants in the city in the 1980s. Like Detroit, which lies 60 miles southeast, Flint was once a major industrial production center but in recent years, has become an emblematic rustbelt city with high unemployment and poverty. In the ‘60s and ‘70s, General Motors employed as many as 80,000 of Flint’s residents. Today, less than 5,000 residents are employed by the auto manufacturer. More than 40 percent of the city’s residents live below the poverty line today, making it the second-poorest city for its size in the entire country. It is no wonder that the state’s elite ignored the health crisis in Flint for so long. As with all environmental crises—whether Hurricane Katrina or the BP oil spill—the politicians and corporations who carry out the crimes go unpunished and those who will pay are people of color, the poor, and the oppressed.

The parallels between Detroit and Flint do not end there. This past week, Detroit’s teachers staged a sickout in protest of the dangerous conditions in the city schools where black mold, crumbling cielings, and rat infestations are common occurances. These unsanitary conditions were overlooked for years, even under the school system’s new emergency managers because, as in Flint, the children affected are poor and black, in other words, invisible to the decision makers in both Michigan and Washington.

How can we win justice?

What’s clear is that we should not expect the Republican or Democratic establishment to seriously pursue charges against Snyder, Earley, Walling, or any of the politicians responsible for the contamination on their own. Obama’s Justice Department has led investigations into police killings in Cleveland and Chicago and still no public official has faced trial. We have yet to see even a single police officer convicted for any of the dozens of high-profile murders of black and Latino youth in recent years. So we should be wary of any attempts to pacify the movement for justice with an announcement of an “official investigation” into the situation in Flint.

In order to bring those responsible for the crisis in Flint to justice, a major mobilization of the working class and poor is needed with strikes, shutdowns, and other actions. A natural link should be made between the oppressed people of Flint and the teachers and working class parents in nearby Detroit who are fighting dangerous conditions in the city’s school system.

It is likely that dozens of cities across the country stand at the brink of a man-made environmental disaster like Flint’s. Indeed news of the catastrophe in Flint broke the same month that a major gas leak was discovered in Porter Ranch, California, which has been called nation’s worst environmental crisis since the BP oil spill. More than 2,300 families have been evacuated in Porter Ranch after residents began experiencing nausea, nosebleeds, and respiratory problems. The crises in Flint, Porter Ranch, and elsewhere across the country should make one thing clear: it is time we build a mass movement for environmental justice and the rights of poor and Black people in the U.S. Our lives depend on it.