Why Are Home Health Aides Working 24-Hour Shifts and Only Receiving Pay for 13 Hours?

Home health aides in New York are currently allowed, by law, to get paid for only half of a daylong shift. 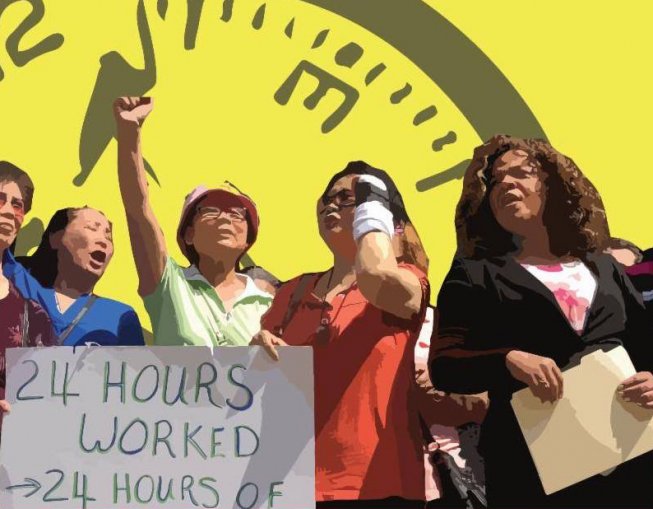 Credit: Ain't I a Woman campaign

Home health aides in New York are currently allowed, by law, to get paid for only half of a daylong shift. However, as a result of several years of struggle, two cases in the New York Court of Appeals, Andryeyeva and Moreno, could put an end to this gross exploitative practice.

Currently, home health aides work 24 hour shifts but only get paid for 13 of those hours. Home healthcare agencies are able to pay below minimum wage largely due to the New York Department of Labor (NYSDOL). Initially, NYSDOL created an opinion letter (which is an official letter written by an agency that explains how they interpret certain rules and regulations), in which they interpreted New York’s Wage Order (23 NYCRR 142-2.1) as saying that home health aides can work 24 hour shifts and be paid for 13 hours if they are afforded 8 hours of sleep, 5 of which are uninterrupted, and 3 hours for meals.

However, home health aides, along with various organizations that are a part of the Ain’t I A Woman campaign!?, opposed this interpretation by arguing that under New York minimum wage laws, they are legally entitled to minimum wage “for the time an employee is permitted to work, or is required to be available for work at a place prescribed by the employer, and shall include time spent in traveling to the extent that such traveling is part of the duties of the employee” (12 CRR-NY 142-2.1).

In the case Andryeyeva v New York Health Care, Inc. (and Moreno v Future Care Health Servs., Inc., the ruling of which was similar to Andryeyeva) the courts agreed with this argument and ruled that NYSDOL’s opinion letter is “neither rational nor reasonable” because it goes against the minimum wage laws, i.e., the Wage Order.

It’s troubling that the NYSDOL is eager to fight against workers on this matter. The agency has had multiple opportunities to either drop their rule or revise it to support workers. Instead, NYSDOL took the route of making it as difficult as possible for home health aides to receive their wages. The agency’s decision is especially egregious because home care workers tend to come from some of the most marginalized populations. According to The Nation, “New York’s more than 300,000-strong home-care and personal-care workforces are set to balloon about 45 and 30 percent, respectively, between 2014 and 2024. About half of these workers, mostly women of color and immigrants, live at or near the poverty level, earning only around $11 per hour, and many depend on public benefits for health care and food assistance.”

NYSDOL is aware that women of color and immigrants are often bullied by employers through sexual harassment, lower pay, and threats of deportation; yet the agency, largely controlled by Governor Cuomo, has chosen not to help protect these workers against the grinding gears of capitalist hyper-exploitation.

These very same women workers have come forward after years of exploitation in the home care industry and are striking fear in agency bosses and state officials by leading the charge to fight for their rights and shake up the industry. Many have called on other workers to unite with them to force the status quo to change.

“I absolutely want the 24 hour work day system to be eliminated, and demand to get compensation for all the 24 hour work that I did with blood and sweat,” says home care worker Zhu Qin Chen.

Many of these challenges could begin to be resolved if the state and federal government simply increased the reimbursement rate to home health agencies, which would amount to wage increases for the workers to mitigate years of state-sponsored wage theft.

Thus far, past rulings and testimony by workers have made it unequivocally clear that home health aides who work 24 hour shifts typically do not receive 8 hours of rest and a meal break because they are responsible for their patients at all times and must be alert to provide assistance.

If the Court of Appeals rules in favor of the workers, they will be one step closer to receiving the wages they have earned. However, many of the workers and the members of the Ain’t I A Woman!? campaign say that pay for 24 hours is not enough, and that the 24 hour workday itself is inhumane and should be eliminated.

“24 hour shifts take time away that workers could be spending with their families and on their wellbeing. The Ain’t I A Woman campaign is focused on fighting for workers’ control over their time. What these home care workers are experiencing is only one example of a greater trend all workers are facing: less time for ourselves and more time for our bosses,” said Leona Rajaee of NYC DSA, an endorser and organizer of the Ain’t I A Woman campaign.