Why Are Theater Workers Marching On Broadway?

Years of low wages, exploitation, and abuse have led theater workers to demand their unions, after having long ignored them, start protecting them. On Thursday, April 22, theater workers in New York City are marching on the national headquarters of the union to demand accountability and change. 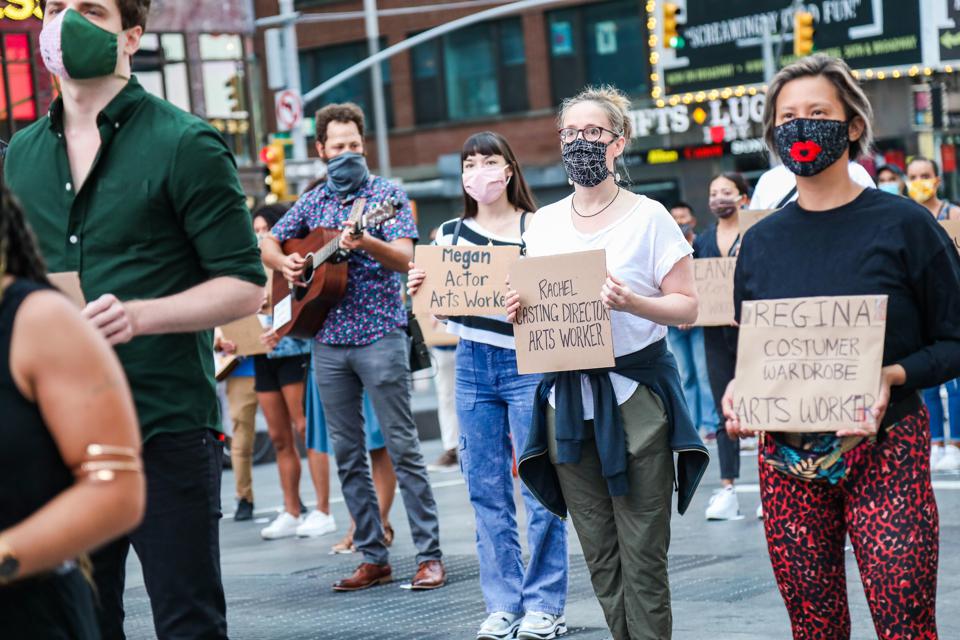 The arts industry is very exploitative. Low wages, high competition, and rampant abuse have been major problems since the birth of the entertainment industry — the Oscars, for example, were started as an attempt to union-bust. That the arts are as exploitative as they are glamorous is one of the most commonly known things about the arts. Our televisions and cinemas are filled with stories of struggling artists, glamorous starlets in distress and brooding artists who live in squalor just trying to write “one great song” (in the words of Jonathan Larson). The truism that most arts workers are “small fish in a big pond” is told to almost every young person who dreams of working in the arts. For well over a hundred years,  this exploitation has been normalized and, in fact, glamorized en masse.  Yes, the theater is exploitative — many have said for years — but this is what you got yourself into, you went into this industry with your eyes wide open. Meanwhile, producers and investors are making billions in revenues a year.

The vast majority of workers in the theater industry, specifically, and the arts, in general, are horrifically low-paid and exploited. For every big celebrity who makes millions, there are hundreds (thousands!) of arts workers toiling away in low- and (often) un-paid jobs. Add to this the COVID-19 pandemic has, effectively, rendered close to 100 percent of theater workers unemployed. You can see why so many are angry.

Actors’ Equity Association (AEA) — commonly known just as “equity” — has long had a union leadership that has done little to protect the workers it claims to represent. From setting high barriers of entry — leaving the vast majority of actors without a union or the protections they offer — to turning a blind eye to union-busting tactics like nonunion Broadway tours, AEA has revealed itself to be a hyper-bureaucratic union that does little to protect workers. The leadership is far more concerned with the privileged few of their workers who get to Broadway than the vast majority of their members — and aspiring members — who work in far more precarious positions. These “stars” have more consistent work and are able to provide a more steady stream of dues money that helps enrich and maintain the leadership of AEA, while most actors work more inconsistently and with contracts that pay far less than Broadway contracts. In addition, AEA is also somewhat unique in their seeming opposition to allowing new members to join — the membership process is arduous and seems almost designed to be exclusionary. This means that the vast majority of actors are not allowed to join the union.

The pandemic has effectively ripped the mask off of the AEA bureaucracy as they’ve done essentially nothing — save doing events with Chuck Schumer — to protect arts workers who are out of work. The bureaucracy of AEA (and all other arts unions) has consistently put their faith in the Democrats to pass an arts relief package and all of their advocacy is limited to, essentially, telling their members to put their faith in the Democratic Congress. Unsurprisingly, this relief hasn’t materialized and the most precarious of arts workers  continue to suffer.

Adding insult to injury, in the midst of the pandemic, AEA kicked all of their members off of health insurance — all while still expecting them to pay dues for this coming year. They also publicly quarreled with the Screen Actors Guild (SAG) about jurisdiction over digital plays, leaving their memberships out in the cold as the bureaucracies of both unions fought over who would represent the primary (and often, only) way that stage actors were able to work. SAG claimed that digital plays were films and, thus, under their jurisdiction, while AEA claimed that digital plays were plays and under theirs. Meanwhile, rank-and-file actors were left out to dry.

The recent allegations of truly despicable abuse perpetrated by theatrical mega-producer Scott Rudin and the lack of repercussions seems to have been the straw that broke the camel’s back. Now rank-and-file activists are revolting against the leadership of Actors Equity Association (AEA) — the union that represents actors and stage managers — and calling a “March on Broadway” this Thursday, April 22, marching specifically to the national headquarters of AEA.

Rudin is often seen as untouchable by many in the industry. For years, he has been able to physically attack his staff and continue to work. Last week, he released a statement saying that he is “stepping back”. It was nothing more than pure theater, designed to stop negative headlines.

The allegations of assault against Rudin, along with the ongoing attacks on precarious arts workers are now culminating in this march on Broadway, where workers are threatening to withhold their union dues in protest of what they see as a lack of protection from their union. They are sick and tired of having a union that collects their dues and then does little to help them when they need it. Many AEA members are currently threatening a dues strike, in protest of the bureaucracy of the union.

In a press release, the organizers of the March on Broadway laid out the following demands:

The struggle inside of AEA is reminiscent of the struggle within many other unions — a struggle of the rank-and-file who feel they’ve been abandoned by a bureaucracy that is more interested in appeasing the bosses than they are supporting their workers. Workers need to break with this misleadership. The answer to this fight is rank-and-file democracy within the unions. As rank-and-file workers, we need to re-take our unions and make them into fighting organizations that don’t cut backroom deals with the bosses and politicians. We need to challenge the bureaucratic and treacherous leadership of our unions and fight for mass-assemblies of both unionized and non-unionized workers to make decisions about what our organizations should be doing. And we must take militant action in our workplaces and the streets to demand relief from the crippling economic crisis. This need is true across industries, but especially true for arts workers who have been so hard-hit by the pandemic. The leadership of AEA has failed their members time and time again. It is time for the rank-and-file to take their union back.