Why Berliners Should Vote Yes to Socialising Big Landlords

The referendum to socialise Deutsche Wohnen and other realty companies is taking place on September 26, parallel to the Berlin and German elections. The latest polls show: we could win. 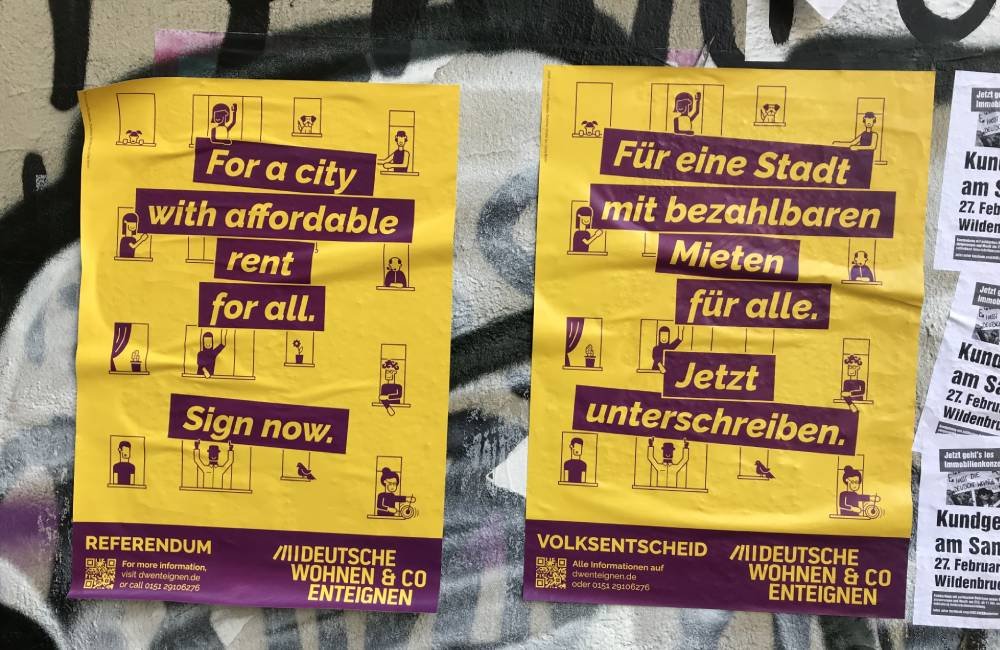 The latest polls show that a majority of Berliners are in favour of expropriating big landlords. According to a survey by public TV news rbb Abendschau and the newspaper Berliner Morgenpost, 47 percent of people in the city find expropriation good or somewhat good, while just 43 percent find it bad or somewhat bad.

With less than a month left until the vote on September 26, this is amazing news. As a communist, I have spent 20 years screaming from the rooftops about the need to expropriate big capitalists — this is the first time the majority has been on my side. Rents in the city have doubled in the past decade. With just about everyone worried about potentially losing their homes, people are ready for radical solutions.

Deutsche Wohnen und Co. enteignen (Expropriate Deutsche Wohnen und Co.) is campaigning with the slogan: “So Berlin remains our home.” A friend who moved here from New York City explained the danger. Back in the 1990s, people there told him not to worry. Yes, rents were rising, but gentrification would never be able to destroy New York’s rebellious character. Now, just a few decades later, Manhattan is an empty shell, with lots of housing kept empty by absentee investors, while the outer boroughs are increasingly unaffordable for working people. That could happen in Berlin.

That’s why so many people are calling for “socialisation,” which is allowed by Article 15 of Germany’s Basic Law. Opponents say that we can’t just confiscate property of these international financial speculators. But it’s not like they built anything themselves. Their holdings are made up largely of former public housing, which was paid for by tax payers. In the early 2000s, these companies snapped up almost 200,000 apartments for cents on the euro in a fire sale of privatisation.

Manhattan is an empty shell, with lots of housing kept empty by absentee investors, while the outer boroughs are increasingly unaffordable for working people. That could happen in Berlin.

Privatise, by the way, comes from the Latin privare — meaning “to steal.” That is not the only criminal activity going on with renting.

A recent investigation by Der Spiegel shows that Germany is “a paradise for money launderers.” Criminals from around the world are taking their dirty money to Germany, and a lot of that goes into the “non-financial sector,” which includes yachts and luxury cars, but also realty. The government estimates that €30 billion ($35.6 billion) is laundered each year in this country — independent experts put that number closer to €100 billion ($118.7 billion).

If someone has tens of millions of euros from trafficking cocaine, they can bring it to Berlin and buy an apartment building. It’s no problem to pay in cash — imagine someone plopping a sack full of small bills onto the table, like a criminal Santa Claus. Astoundingly, such transactions are neither illegal in the eyes of the tax authorities, nor particularly strange in the eyes of realty brokers.

The referendum calls for any company with more than 3,000 housing units to be expropriated. All together, this should make up more than 200,000 apartments across the city. No one, however, knows for sure. Even the city administration can’t figure out who actually owns between one fourth and one half of properties in the city — everything is hidden behind offshore shell companies.

But won’t expropriation just turn us into the GDR, i.e. the German Democratic Republic, i.e. East Germany? There is so much to criticise about that Stalinist statelet — critical communists like me often got thrown into prison. But housing is actually something the East Germans did right.

In that terribly poor country, every resident had a constitutional right to a home. Rents were so low as to be symbolic. No one was homeless. The GDR built between two and three million apartments in the prefabricated concrete style known as Plattenbau. At the same time, many older buildings in inner-city neighbourhoods were left to decay — which one can certainly criticise from an architectural point of view. But people would just move into the empty homes, and the “People’s Police” generally didn’t care.

Let’s compare that to today’s system in an infinitely wealthier country. Right now, thousands of Berliners have no home at all. Far more people lack enough space to have any privacy. Meanwhile, an unknown but large number of properties are kept empty by investors. The government spends millions of euros to violently eject people from their homes, so that the buildings can stand empty.

Comparing the two Germanys, it would seem that not-for-profit housing works well. But that’s beside the point: no one is calling for the resurrection of the GDR. The campaign is calling for a new public housing company under the democratic control of renters. And would anyone like to speak up against democracy? Would they argue that housing should remain in the hands of mafia bosses and investment funds, rather than in the hands of the people?

We should criticise the GDR for its lack of democracy, but we should defend democracy in every sphere of life.

And speaking of democracy: every third person in Berlin is excluded from voting. This includes people under 18, but the biggest group is the 789,000 people without German citizenship. There are areas of Neukölln where more than 60 percent of people cannot vote. These are also areas where former public housing projects have been privatised, and now big landlords are jacking up rents while allowing buildings to rot.

As the activist Ferat Ali Kocak has said, his grandfather has been in Berlin for over 50 years — that is longer than the companies Deutsche Wohnen and Vonovia have existed together. Yet the grandfather has no voice when it comes to housing policy, and the big landlords do.

The referendum is just one instrument to create housing for all. One hundred years ago, in 1921, 300,000 renters across Germany went on a rent strike, and their demands included the “socialisation of the housing sector.” A century of capitalist development has shown that this system can’t create affordable housing. So time to revive some old-school methods.