Why Did López Obrador Win the Mexican Presidency?

Andrés Manuel López Obrador (AMLO) crushed the other candidates in Sunday’s election, winning over 50% of the votes—twice as much as his nearest opponent.

The international press, with good reason, has described the Mexican election as historic because of the massive level of voter participation. In the last elections, 63% of the electorate voted, and in this one, 78% took to the polls.

The international and national press is filled with headlines about the “leftist” who won the presidency. AMLO is, in fact, a center-left politician whose election represents deep discontent with the political establishment. The masses invested their aspirations in his candidacy as a product of their deep resentment against the parties that have governed Mexico for the last century.

AMLO, part of the political party MORENA (which stands for National Regeneration Movement in Spanish), won 53% of the total. Ricardo Anaya of the right-wing party PAN has 22% of the votes, and José Antonio Meade, of the outgoing PRI government, has 16%. The “independent” candidate Jaime Rodríguez Calderón “El Bronco” did not reach double digits. 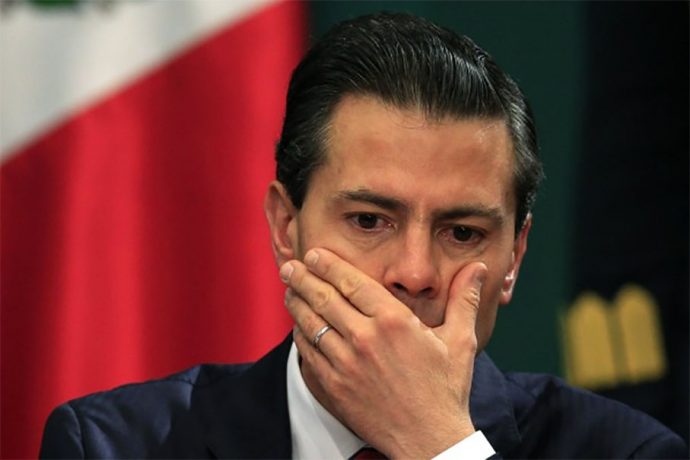 MORENA was founded in 2014, making it a very new political party. To ensure its electoral success, MORENA entered into a coalition with two other political parties, the PES (Partido Encuentro Social) and PT (Partido de Trabajadores). The PES stands out in this coalition for its right-wing and evangelical politics; it even organized a march for the traditional family—against abortion and LGBT rights.

AMLO fared well in central and southern Mexico, where he and the left have historically had much support, but he also saw his support grow in the industrialized north of the country, which has traditionally supported the right-wing PAN. MORENA also did very well, winning governorships in Mexico City and in the states of Veracruz, Tabasco, Morelos and Chiapas.

The roots to AMLO’s success lie in the crisis of the traditional Mexican political parties, a crisis exacerbated by the policies of the Trump administration.

The “democracy” that never existed

The oldest and most powerful Mexican political party is the PRI, which has governed Mexico for all but 12 years since 1929. In 2000 it was replaced by the PAN, the right-wing party connected to the capitalists and the church, which capitalized on popular resentment toward the PRI’s monopolization of power.

The “peaceful” transition of power from the PRI to the PAN was lauded as an example of a functioning Mexican democracy and an opening up of the political regime. Meanwhile, the PRD, formed in 1988 as a “left” alternative to the PRI, provided an ostensible option for those on the PRI’s left.

For the next 18 years, the PRI, the PAN and the PRD co-managed Mexico, using the same methods as the PRI: corruption and repression of social movements while generating profits for national and international capital.

Although Mexico was no longer a one-party state, none of the most authoritarian aspects of the Mexican political reality changed. This new regime was entirely functional to imperialist interests since it helped stabilize the country and quelled mass movements to reap the profits of NAFTA and “free trade” with Mexico.

Thus, 2018 represents a seismic shift. The three-party management of Mexico has collapsed, and a new political actor has taken the stage. In this sense, MORENA appears before the mass movement as the realization of the promise of democracy, which none of the three establishment parties have been able to deliver.

The state is responsible

The causes of this electoral collapse can be traced to the crisis that began in September 2014 with the disappearance of 43 students in Ayotzinapa, in the southern state of Guerrero.

There, an armed operation orchestrated by the Mexican army, local police and drug cartels killed six young people and disappeared 43 students. The 43 students became the symbol of the hundreds of thousands of Mexicans disappeared and displaced by the war on drugs. This case uncovered the association of the governing parties with the police and army, as well as with the drug cartels. This demonstrated to all of Mexico and the world the deeply rotten and brutal realities of the Mexican state. 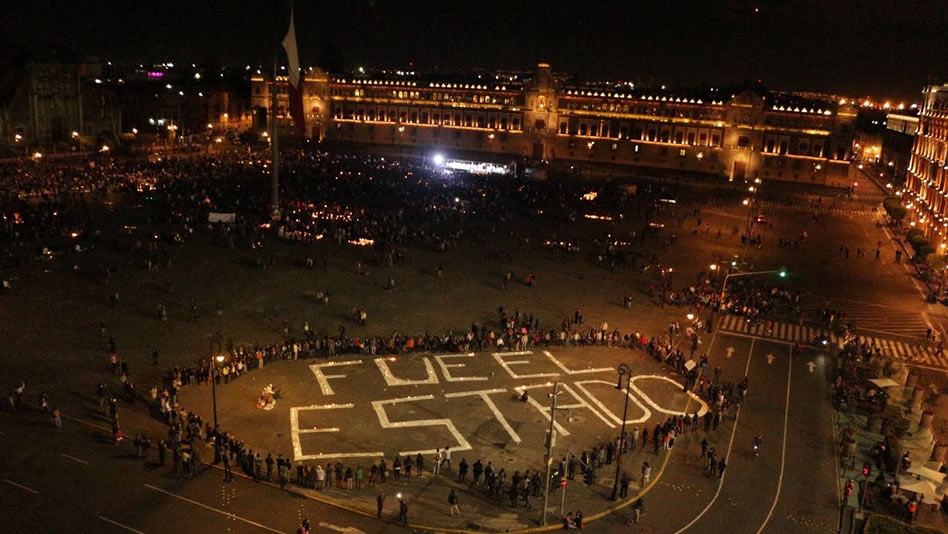 “The State is Responsable”

The response of the masses was powerful: millions took to the streets demanding that the president be ousted: “¡Fuera Peña Nieto! (Out with Peña Nieto!).” For eight months, youth pointed the finger squarely at the state for the disappearance of the students. The anger spread like wildfire, and people mobilized both nationally and internationally. 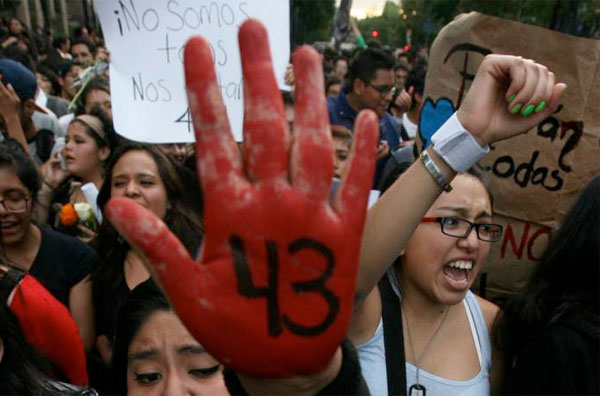 The government did not fall, but neither the president nor the traditional parties of the Mexican regime recovered from the blow. This Sunday, Mexicans voted with rage—rage against not only the PRI but also with the parties that led the country into the abyss. The figures of the so-called war on drugs speak for themselves: 211,000 deaths since 2007, according to the Ministry of Interior’s official numbers. That is more than 52 deaths a day for the past 11 years.

The “mafia in power”

To maintain power, the traditional Mexican parties have in the past few months waged a massive campaign against AMLO. The official media warned of the dangers of MORENA: Mexico will be transformed into Venezuela, they said, and this will be an armed revolution.

The reality is that AMLO and his agenda to “save Mexico” has one central axis: stopping corruption, which, according to him, is what causes people’s hardships. This struggle against corruption reflects the feeling of the masses—who are wary of corrupt political forces, particularly the PRI.

But AMLO does not question neoliberal policies or Mexico’s subordination to the United States, which drove the previous administrations. His proposals are far tamer than even the measures taken by the Pink Tide governments in countries such as Argentina, Bolivia and Venezuela—he questions corruption, but not imperialist subordination or the hyper-exploitation of the working class.

The specter of “AMLO the socialist” is an illusion. Throughout his campaign, AMLO sought to reassure the capitalist class. In this victory speech, for example, he said, “We will not act arbitrarily, nor will there be confiscation or expropriation of property.”

In the United States’ backyard

The idea of a Pink Tide government in Mexico is scary not only for Mexican capitalists but also for the transnational corporations and U.S. government. Mexico is the second-largest economy in Latin America and the United States’ primary trade partner, rivaled only by China.

The national economy based on the manufacturing and oil industries depends completely on U.S. and transnational capital. Twenty-five million Mexicans work in the United States, many of them sending money back to their homeland. This unequal economic arrangement also extends to the governing of the state. Mexico’s security policies function under the orders of Washington, as is the case in Operation Fast and Furious as well as the Merida Plan.

Thus, the most disruptive element that gave rise to AMLO is Donald Trump’s presidency. The fact that the U.S. president won the election with the explicit objective of ending NAFTA and building a border wall shook the project of the Mexican propertied classes, bourgeoisie, and political caste.

AMLO has no intention of changing Mexico’s economic model, challenging imperialist subordination or the massive profits of Mexican and foreign capitalists. He plans to remain in NAFTA, and at the most he will put some restrictions on imperialist investment in oil exploitation.

Although AMLO spoke of combating poverty and inequality in his victory speech, he also sought to reassure capitalists. “There will be freedom for companies, freedom of expression, association and belief,” he said. “All individual and social freedoms will be guaranteed, as well as the citizenship and political rights enshrined in our Constitution. In economic matters, the autonomy of the Bank of Mexico will be respected. The new government will maintain financial and fiscal discipline. The commitments made with national and foreign companies and banks will be recognized.”

But the real danger to the capitalists is not in AMLO’s presidency. What really scares the bourgeoisie on both sides of the border is the discontent of the masses and of the Mexican workers. AMLO’s conciliatory policies may clash with the aspirations of millions who believe that AMLO is a real agent of change. These Mexican masses have already been the protagonists of important struggles in the past few years, such as for the 43 disappeared students and in teachers strikes. 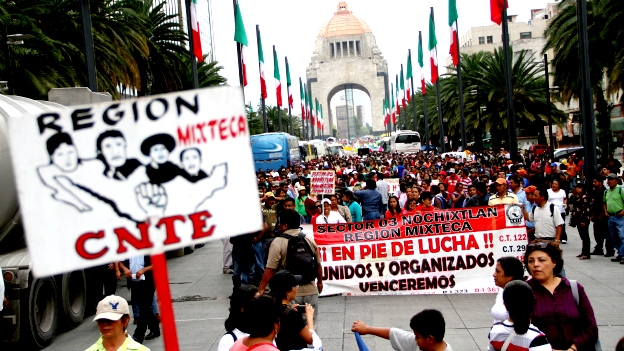 Mexican teachers in the streets of Mexico City 2016
Photo: Especial

Will the women’s movement fight femicide and abortion? Will the workers fight to improve their standard of living and end precarious work? Will indigenous people and peasants fight imperialist dispossession of their lands and natural resources? Will the working class and poor fight to renationalize the oil industry, which was privatized in 2012? It is not out of the question that the Mexican masses will become independent actors seeking to fulfill their own demands.

Trump’s policies in Mexico have generated deep discontent, leading to protests on both sides of the border. While AMLO has already promised to negotiate with Trump, it is possible that the Mexican masses will reject such a negotiation without guarantees for the rights of Mexican migrants to the United States.

When AMLO faces the choice of supporting either the working class and poor or the imperialists and the capitalists, we already know what side he will be on. He said so in his victory speeches and in many speeches on the campaign trail. Confronting imperialism and the Mexican capitalists would require mobilizing the deep resentment and class hatred that has laid dormant since the Mexican revolution.

Mexicans cannot trust a president who wants to “govern for all” and maintain friendly relations with the United States, rather than one who will govern for those who are the most exploited and oppressed. It is urgent to organize an independent, revolutionary, working-class organization that will participate in the struggles to come and that will prepare for an open confrontation with the Mexican regime and the Imperialist offensive.