Why Hamilton Is the Most Right-Wing Musical on Broadway

In the midst of a movement against systemic racism, Disney has released a filmed version of the musical Hamilton. But when one looks past its diverse cast and enjoyable score, it becomes clear that Hamilton glamorizes slave owners. 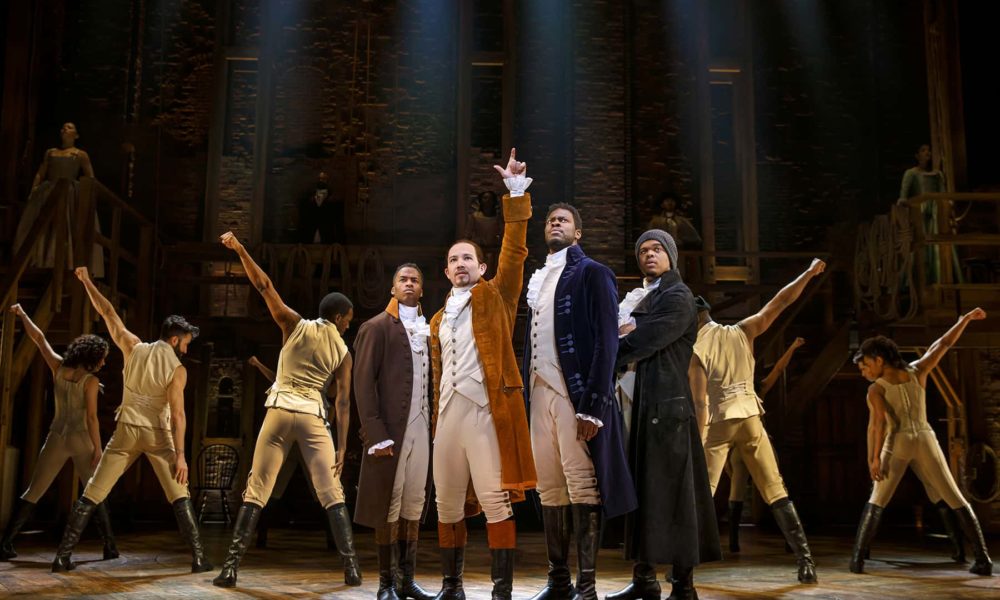 The day before July 4, Disney+ released a filmed version of the hit Broadway musical Hamilton. Unsurprisingly, the musical once again became a social media phenomenon. The current uprisings against police violence, however, have created something of a backlash against the musical. Hamilton is now being interrogated at a much deeper political level than it was when it first premiered in 2015.

While Hamilton did give opportunities to Black and Brown performers, who are often severely limited in their options, it is important to also engage with Hamilton as a piece of political art. Writer, composer, and star Lin-Manuel Miranda has been very explicit about his attempts to connect the story of Alexander Hamilton with more contemporary themes. Even a cursory investigation of the text of the musical reveals it to be one of the most conservative shows in recent memory. Miranda has written a very effective piece of propaganda for the slave owners who founded this country. He adds insult to injury by having Black and Latinx actors portray the very people who oppressed and murdered their ancestors.

The central conceit of Hamilton is that Alexander Hamilton was a “young, scrappy, and hungry” immigrant whose journey to make it in America is comparable to that of a hip-hop star rising from a poor background to fame and fortune. This journey, Miranda claims, is an allegory for the American experience writ large. This concept is where the politics of Hamilton start to go wrong.

To begin with, Miranda equates immigrants — specifically Latinx immigrants — with colonizers. This is key to how Miranda views the Founding Fathers. We are meant to see working-class people from Latin America coming to the U.S. in search of jobs in the same light as wealthy Europeans coming to the colonies to, well, colonize them. For example, the musical’s much quoted line “Immigrants, we get the job done” is said by the Marquis de Lafayette, a French aristocrat. Is this really a good example of an “immigrant” in the United States?

Throughout Hamilton, a class perspective is not only missing but is actively obscured. Miranda presents his characters as substitutes for young people today who want to make something of themselves. If Hamilton was able to work his way up the ladder of American society, then so can any immigrant who tries hard enough. Miranda seems to fully believe this kind of Horatio Alger story. But this capitalist myth-making has been challenged in the American theatre dating back to Death of a Salesman, making Miranda’s propaganda seem horribly dated. Hamilton offers up a conservative perspective on America that is far to the right of most modern theatre.

One of the songs in Hamilton states “you have no control, who lives, who dies, who tells your story.” So why exactly did Miranda choose to tell this story? He claims that he picked up a biography and fell in love with Hamilton. But to accept this story as presented, one has to drink the Kool-Aid of American exceptionalism. At every turn, Miranda chooses to present the traditional narrative of the American Revolution which erases the actual struggles of people of color during this period. To name one example, the Haitian Revolution occurred in the time covered by the musical, ending mere months before Hamilton died. The Hatian Revolution is documented in its own page-turning historical book — Black Jacobins by CLR James — and could just as easily be turned into a musical. But Miranda isn’t interested in actually telling the stories of people of color rising up against their oppressors. Instead, Miranda chooses to use diverse casting to tell a story about the Founding Fathers.

By removing class, Miranda allows himself to rehabilitate a collection of slave owners with catchy pop tunes. Now, Alexander Hamilton, George Washington, Thomas Jefferson, and their compatriots are no longer bourgeois slave owners, but rather plucky freedom fighters and young men trying to make something of themselves. This bourgeois conception of the American Revolution as a war of freedom erases the fact that the freedoms won for the wealthy white colonists were built off of the labor and murder of Black and Native people.

Throughout the play, characters talk of “rising up” against oppressors. Of course, this takes on extra meaning given the largely Black and Latinx cast. Our heroes are presented as members of an oppressed group who are revolting against tyranny. But they were fighting for a bourgeois version of liberty. Indeed, even Hamilton himself bought and sold slaves on behalf of his in-laws and managed an import business that engaged in the slave trade. All the facts about slavery and genocide are swept under the rug.

The American Revolution put a bourgeoisie in power, and their ideals of freedom did not apply to everyone. Black people remained enslaved, women were still deprived of most legal rights, and the genocide against the Native peoples only escalated. The American Revolution is a textbook example of a bourgeois revolution, which proclaims the goal of democracy and universal rights, but creates a system based on capitalist exploitation.

Miranda offers no critical perspective of any kind.  The show presents Hamilton’s brand of American capitalism as being “a work of genius.” The acknowledgement that the South has it “made in the shade” because they “don’t pay for labor” is a shamefully glib acknowledgement of the new country’s slave-based economy. In every scene, Miranda shows his capitalist colors.

Is there anything less progressive than presenting the Founding Fathers as moral stalwarts fighting for liberation? Miranda views the Founding Fathers as great heroes and slavery as just an unfortunate lapse in judgement. The political point-of-view in Hamilton is actually to the right of most modern K-12 history books. In a time when protesters for racial justice are tearing down statues of slave owners, this is a musical designed to celebrate those same slave owners.

In his review of Hamilton, Ishmael Reed summed up the cognitive dissonance present in having people of color play slave owners: “Now I have seen everything. Can you imagine Jewish actors in Berlin’s theaters taking roles of Goering? Goebbels? Eichmann? Hitler?” As memorials to genocidal slave owners fall in cities across the country, we must understand that one created in 2015 sits on Disney+. This isn’t to say, of course, that we must pull Hamilton down and hide it away from public consumption. But we must have difficult discussions about what, exactly, the show is saying.