Why People in Germany Are Protesting Against Racist Police Violence Too

After the murder of George Floyd, tens of thousands of people have taken to the streets in different German cities as well. This is not just about solidarity with demonstrations on the other side of the Atlantic. This is about racist police violence in Germany. 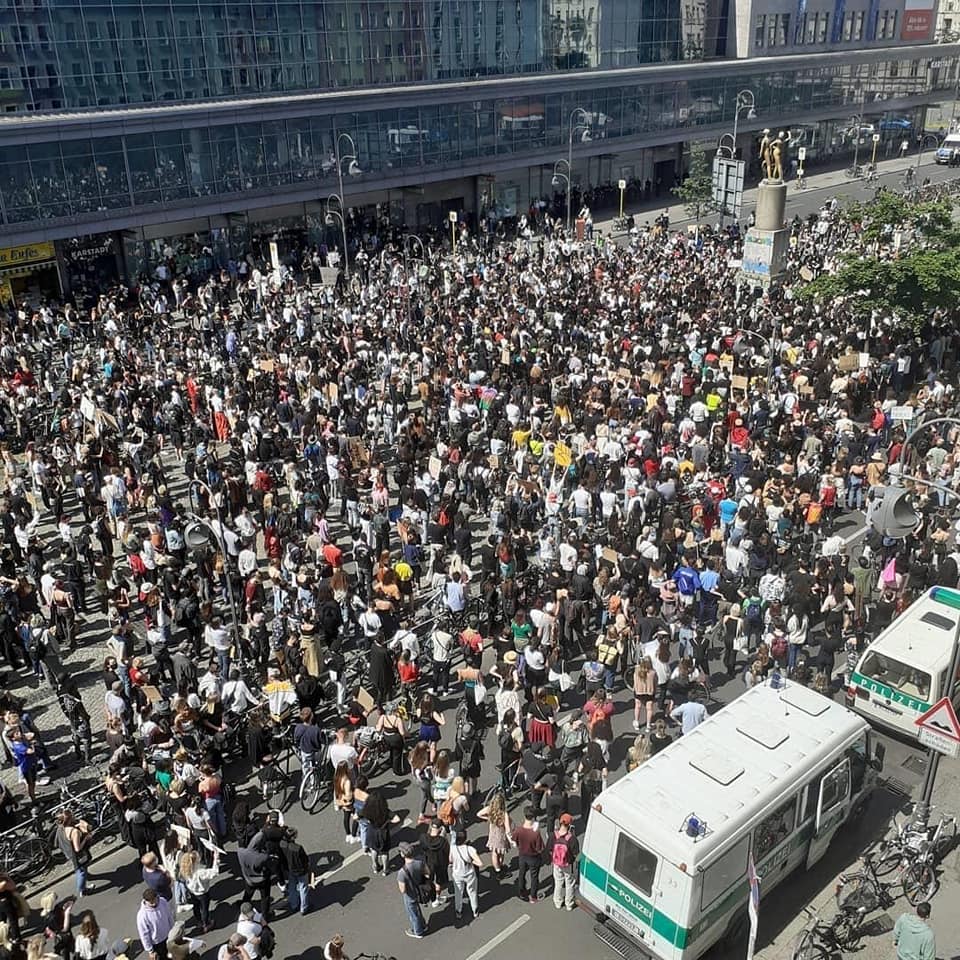 After the brutal murder of George Floyd, revolts have broken out across the United States to demand justice and to resist the murderous police violence. But not just there. In the last few days, thousands of people have taken to the streets in different German cities to demand justice and an end to racist police violence. Although the protests were sparked by the horrific murder of George Floyd, they are also directed against police violence and systematic racism in Germany.

The media talk about an unbelievably high number of “individual cases” of police brutality in the United States: George Floyd is just the latest example to make international news. In recent months we have also heard about the murders of Breonna Taylor, Ahmaud Arbery, and Sean Reed. Two days after the murder of George Floyd, on May 27, a Black trans man named Tony McDade was shot and killed by a Florida police officer. The statistics speak for themselves: Since 2010, a total of 4,076 people have been killed by police in the United States.

But what is the situation like in Germany? The official number of police murders from 2010 to 2018 was 86. This is much lower than in the United States, but the population is also smaller: the USA has 328 million people and Germany just 83 million. But this is mostly because the United States was founded on the basis of slavery, so U.S. police historically emerged from armed slave patrols in the South and private armies defending capitalist property

Yet police in Germany can and do murder Black and Brown people with impunity. The bourgeois media are all too happy to portray violence and murders as “isolated cases,” but there have been many murders of people in police custody in Germany. To give just one example:

Oury Jalloh fled Sierra Leone during the civil war and came to Germany. On January 7, 2005, the 37-year-old asylum seeker was taken into police custody in the city of Dessau. A few hours later he was found dead — burned to death in a cell. According to initial investigations, he had supposedly set fire to his mattress with a lighter — despite the fact that his hands and feet were restrained, and no lighter had been found on his person before he was put in the cellIn the following days, the first doubts arose about this version of events: Oury Jalloh could not have set himself on fire. The senior public prosecutor Folker Bittmann nevertheless defended the claimed that it was a suicide. The renewed examination in 2012 had in fact “not revealed sufficient factual evidence of third-party involvement in the setting of the fire.” For years, initiatives have been fighting for the murder of Oury Jalloh to be named and condemned as such. Here is a good documentary on the case.

People of Color and especially Black people in Germany have to face all sorts of police violence in their daily lives, ranging from racial profiling to physical violence and terror. More cases of police and state violence happen every day in Germany. Two Instagram accounts document this regularly: @polizeigewaltdeutschland @deathincustodyde

The NSU (National Socialist Undergorund) was a neo-Nazi terrorist group that was responsible for the murders of 11 people before being uncovered in 2011. The fact that it could operate for a decade revealed disturbing links between the state and violent far-right organizations. The case raised fundamental questions about how the state institutions like the “Protectors of the Constitution” (Germany’s domestic secret service) or the police are intertwined with the far Right.

In the last few years we could also observe an increase in racially motivated violence and right-wing terrorism, like in the terrorist shootings in Hanau in 2020 or in Halle in 2019 (just to name two cases).

The NSU, Hanau, and Halle show that racist violence in Germany is often the product of links between the domestic secret service, the police, the military, and right-wing terrorists. This is not the personal opinion of a communist — even the public radio underlines this fact (our translation):

This also happens in the United States, where the Ku Klux Klan is connected with police officers. The FBI, which organized a large number of military coups in Latin America and destroyed the Black Panther Party, has been investigating human rights organizations in recent years, as they posed a “threat to the rights” of KKK members.

This relationship between the state and racism also manifests itself in another area: migration. So-called “anchor centers” (detention camps for refugees) are another parallel between Germany and the United States. There are more than 40 of these prison-like institutions on German territory. How the situation looks like in there and how the government reacts to the conditions people face in there can be seen in this video.

In the United States, the deportation authority ICE (U.S. Immigration and Customs Enforcement) has been criticized for quite some time now for its aggressive raids against immigrants. The capacities for deportation have grown enormously: Between 1892 and 1997, 2.1 million people were deported; between 1993 and 2016, that number grew to seven million.

The second figure merits more attention, since it reveals the weakness of a widespread strategy against racism: Between 2009 and 2016 alone, 3.2 million people were deported. The Democrat Barack Obama was the U.S. President at that time. He might have spoken out against racism, but intensified racist policies.

Ilhan Omar, one of the leading immigrant figures of the Democratic Party, is taking a similar line. She is currently calling for de-escalation during the revolts in Minneapolis, Chicago, and New York.

The record of these two Black politicians suggest show that Democrats cannot offer a better anti-racist perspective than Republicans. We should reject both of these parties, in search of a real strategy for victory over racism and capitalism. Left reformism, which is committed to changing society from within government, is and remains co-administrator of the racist violence of the bourgeois state. A strategy of “renewing” the system cannot lead to victory. The state must be smashed, especially its repressive institutions like the police and security forces.

The United States has a long tradition of revolts, and the most famous were probably the LA Riots of 1992. We have seen this form of struggle around the world recently: in Haiti, Iran, Hong Kong, the Arab Spring, Chile… All these processes show us something important: these revolts are heroic acts of resistance, and we must defend their legitimacy. But the revolts alone are not enough to win. In Chile, for example, not a single demand has been fully implemented after seven months of resistance.

Racist police violence is an inevitable product of the bourgeois state, which is necessary for the oppression of one social class by another. That is why people like Obama, despite their anti-racist rhetoric, cannot bring about real change. Someone who actually fights for the interests of the oppressed and the working class would never win a bourgeois election like that

Police violence is a question of power. This power is exercised through structures and organizations. Therefore, the central question in the struggle to end oppression and exploitation is How can we organize ourselves to win power? We need a strategy to stop police terror.

First published in German on May 30 on Klasse Gegen Klasse.