At the root of all the mainstream media hype about “Striketober” lies the capitalists’ tenacious drive to keep their profit-making machine churning each and every day, and their fear that every strike has the potential to spark something much more threatening than monetary losses. 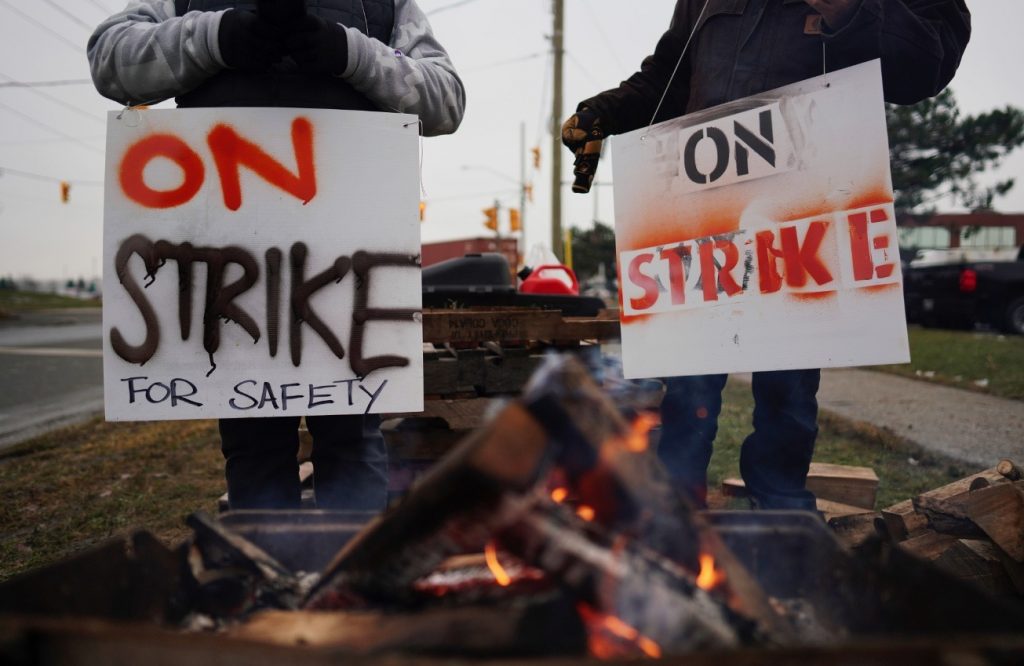 All the hubbub in the bourgeois media about strikes and threats of strikes brings to mind these words of Robert von Puttkamer: “Behind every strike lurks the hydra [monster] of revolution.”

Puttkamer served as Prussia’s Minister of Interior under Prime Minister Otto von Bismarck (his brother-in-law) in the late 19th century, and was “notorious for the persistent persecution of socialists and class-conscious workers,” as V.I. Lenin wrote in his 1899 magazine article “On Strikes.”

Lenin famously described politics as a “concentrated expression of economics.” In his magazine article, he makes abundantly clear how politics and economics come together — in a way that shakes the capitalists to their very core — when workers use their powerful weapon: the strike. After all, the only thing the bosses want from workers is labor. The capitalist political system — the courts, the cops, and every other aspect of it — serves this economic interest. That’s why even just the threat of withholding that labor is so menacing in every aspect. It doesn’t just cost the bosses money. Each and every strike challenges the foundation of their system of exploitation.

But what did Puttkamer mean with his remark about revolution lurking behind the strike? Lenin explains, writing of the “government” as a proxy for capital itself:

In other words, strikes not only create economic tensions, but are also a form of conflict between the great majority, the working class, and the government and minority class it serves.

In terms of economics, strike actions result in less productivity, which means lost revenue and lower profits. Employers lose money when strikes delay getting their products or services to the marketplace, so that they can sell what workers have made and extract the surplus value — the difference between the full value at market and the pittance they typically pay those who actually make everything. Sometimes, strikes diminish market share. Strikes create the kind of economic uncertainty that roils financial markets, where the wealthiest of the wealthy reap their riches through speculation in a casino of often fictitious capital.

Beyond these economic factors, the bosses fear workers seeing other workers fighting back against their exploitation, even if at the level of a single workplace. This is something the bosses cannot abide. It is no accident that they call this labor unrest — a word that speaks to the agitation of a group of people the capitalists count on to be docile, to go about their daily grind of creating more wealth for a tiny minority of humanity.

The Bosses’ Many Weapons

The bosses most certainly understand strikes as being about more than their direct short-term business losses. They may even see more clearly than many in the working class that labor’s powerful weapon has implications that challenge their very rule over society. That’s precisely why the capitalist state has been constructed to provide critical “services” to the bosses for that counterattack about which Trotsky wrote. More accurately, they are weapons to be used against workers.

There’s the lockout, a powerful weapon the capitalist state reinforces on behalf of the bosses. Employers threatened with strikes, or even those that want to force unionized workers to accept wage cuts, new working conditions, or slashes to benefits, may simply deny access to the workplace (or threaten it) as a way to force the workers to give in. The weapon has a long history. In 2011, at American Crystal Sugar, the largest sugar beet processor in the United States, 1,300 unionized workers voted overwhelmingly to reject the company’s demand that they accept higher healthcare payments, more outsourcing, and a large number of other concessions. The company locked them out and hired 900 “replacement workers” to work in its five plants in North Dakota, Minnesota, and Iowa. U.S. law allows for the hiring of these scabs during lockouts.

Despite efforts to mount a national boycott in support of the sugar beet workers, the lockout persisted until spring 2013, when “what was left of the union voted for the fifth time on what was essentially the same proposal [as at the beginning], with 55 percent saying ‘yes’.” Just over 400 union members returned to work.

The National Labor Relations Act (NLRA) of 1935 that establishes federal law around strikes and other worker actions explicitly outlaws some types of actions. Also known as the Wagner Act, it mostly forbids intermittent and partial strikes, work-to-rule actions, and sit-down strikes, allowing the bosses to fire unionized workers for engaging in such strikes and stripping those workers of their union protections. It makes illegal the so-called “secondary boycott” — picketing “neutral” employers. When farmworkers in California in the 1960s were organizing grape pickers, the federal government used the NLRA to try to stop boycotts of the grocery stores that sold non-union grapes.

The capitalists use union leaderships, too, as a weapon against strikers. Sometimes the union bureaucrats are pressured directly with legal sanctions — such as arrests — if they don’t enforce no-strike clauses in contracts, or they fail to get their rank-and-file members to obey court injunctions against picketing. More often than not, though, they have simply abandoned the class-struggle methods — at the center of which is the strike — and instead curry favor with Democratic Party politicians, upon whom they rely to “fight” their members’ battles rather than by unleashing the power of workers themselves. This largely explains the devastating decline in the number of large strikes since the 1970s, as well as the overall decline in unionization. The union bureaucracy has been weaponized against the working class on behalf of the bourgeois state.

These are just a few examples of the weapons the capitalist state has established on behalf of the bosses it serves. No list, though, would be complete without mentioning what Lenin called the “special bodies of armed men” — police and an army “placed above society” — that are at the beck and call of the bosses when faced with labor actions. U.S. labor history is replete with examples of the National Guard being deployed either as strikebreakers or to put down strikes with violence.

Cops, just like the National Guard, have been used time and again to confront strikers, often murdering them in cold blood. U.S. labor history includes a host of such massacres. And today, when workers go out on strike, it’s the cops the bosses call first. Back in January of this year, for instance, cops beat striking workers at Hunts Point, the giant produce market in New York City. These examples are the sharpest expression of Trotsky’s “counterattack.” And they are precisely why cops are not part of the working class, and have no place in our unions.

So, the bourgeoisie can depend on actual police and a sort of “economic police” — the union bureaucracy — working in tandem. And it is the latter that keeps defending the “right” of police to be part of the working class’s trade union organizations.

Onward to “Strikevember” and Beyond

Today, there is no sign of the current strike wave across the United States abating. “Striketober” has the potential to become “Strikevember.” You can be sure the capitalists are thinking about that, and are laying plans for how to retaliate as workers increasingly turn to their powerful strike weapon. You can be just as certain that the ruling class is calling on the Democratic Party wing of the politicians that serve its interest, preparing them for whatever co-optation steps might be needed to bring this upsurge under control.

On the picket lines, though, growing numbers of workers are seeing their individual workplace or industry struggles as something larger — which means solidarity in a common struggle against the bosses. That’s the message Left Voice is starting to hear from striking workers at Kellogg’s in Lancaster, Pennsylvania, and from striking bus drivers in Reno, Nevada. Solidarity is what striking workers at United Metro Energy Co. in New York City are looking for.

“Strikevember” will mean workers have extended their combativity against the attacks on their wages, benefits, and working conditions. It will surely elicit a harsher response and a firmer counterattack than even what we’re seeing today. It is the responsibility of the entire working class, organized and unorganized, employed and unemployed, to stand together in solidarity — now.

As Lenin wrote at the end of his 1899 magazine article, strikes

Daniel DeLeon, an American socialist leader in the late 19th and early 20th century, famously put it this way in his 1905 address at the Union Temple in Minneapolis: “Let the political temperature rise to the point of danger, then, all monkeying with the thermometer notwithstanding, your capitalist will quake in his stolen boots.”

Strikes, and the threat of more strikes, do indeed make the capitalists quake in their boots.