Why Was a Ukrainian Filmmaker Censured for ‘Denying the Russians’ Collective Responsibility?’

The Ukrainian Film Academy has expelled a director for saying he does not consider all Russian people enemies. Right-wing nationalism is not the solution to the invasion. 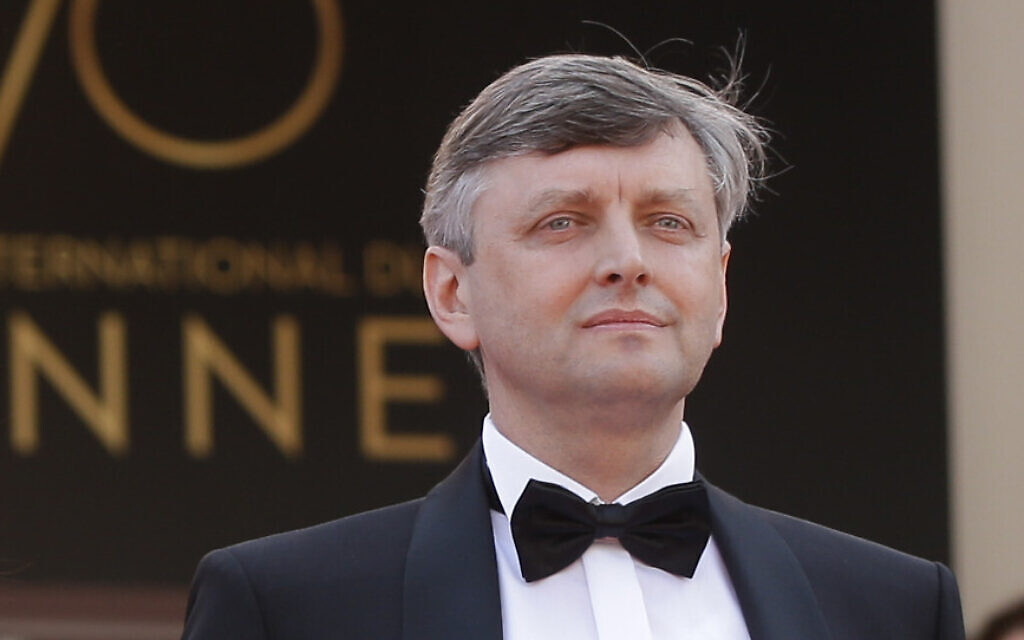 On March 18, the Ukrainian Film Academy (UFA) expelled prominent Ukrainian director Sergei Loznitsa for not giving a “clear and unambiguous” nationalist message to Europe during the Russian invasion. Loznitsa was born in Belarus, moved to Kyiv as a teenager, studied in Moscow in the 1990s, and has lived for two decades in Berlin. The UFA, which is equivalent to the United Statesä Academy of Motion Picture Arts and Sciences, expelled him for opposing blanket bans on all Russian movie makers at international film events. On March 1, he defended individual Russian directors who opposed the invasion: “We must not judge people based on their passports. We can judge them on their acts.” UFA head Anna Machukh declared that since the start of the Russian invasion, “we have tirelessly called on the global film community to boycott Russian cinema. But Sergei Loznitsa publicly opposes this, thus denying the Russians’ collective responsibility for the war.”

The UFA, equivalent of the United States’ Academy of Motion Picture Arts and Sciences, denounced Loznitsa as a “cosmopolitan” and declared that in this defensive war, “the key concept in the rhetoric of every Ukrainian should be his national identity. There can be no compromises.” “Cosmopolitan” as a slur has a long history as a usually anti-Semitic attack on liberal or left intellectuals, accusing them of disloyalty to the nation. Stalin used it in this way from 1948 to 1953.

Loznitsa was denounced for showing a minimal level of international solidarity toward the Russian people, as against the Russian state. Machukh declared that “speculation on the topic of Ukrainian-Russian relations” is “contrary to the values of the [UFA].”

Loznitsa is a liberal with nonconformist historical views. His documentary Babi Yar. Context deals with Ukrainians who collaborated in the Holocaust. He declared that the current war “has nothing to do with nationality,” calling it “Soviet versus anti-Soviet.” He calls for NATO to intervene to drive Russian forces out of Ukraine. Since the war began, he has fulsomely endorsed Zelenskyy. And he absurdly claimed that if Russia takes Ukraine without an internal crisis, it will go on to invade Poland, Germany, and France. In an interview with dissident Russian journalists, Zelenskyy distanced himself from Loznitsa’s expulsion: “I believe it was some kind of mistake. … He’s an artist who supports Ukraine. … [His] position is fair.”

When the war began, the UFA created a quite right-wing nationalist petition to the European film industry, saying, “The outbreak of war in Ukraine is an attack on a civilized world with a democratic system, a crime committed in the heart of Europe.” Evidently they consider aggression against Europeans worse than aggression against Middle Easterners, Africans, or Asians. Referring to attacks on countries with “democratic” governments is a way of saying that they do not object equally to the devastating U.S. occupations of Iraq and Afghanistan or even Russia’s murderous bombing campaign in Syria.

The UFA condemned Loznitsa for participating in a University of Nantes festival called “Between Lviv and the Urals,” which featured films from various ex-USSR European countries. It had demanded, unsuccessfully, that the festival remove all Russian films and replace them with Ukrainian films or films about Ukraine.

The statement on Loznitsa’s expulsion calls for cultural censorship: “We constantly call on the whole world to distinguish between Ukrainian and Russian cultures and not to identify them.” All UFA members “must share this position” with “clarity and rigidity.”

Organizers of the Molodist Kyiv International Film Festival issued an open letter criticizing European festivals for not banning all Russian films. It denounces “the numerous Russians who are fighting this war [and the] numerous common Russians who vehemently support this war,” and calls the “Russian soul … a bottomless pit of despair and slavery, a culture completely different from the European values.”

All this ignores the heavy censorship in Russia and the 15,000 Russians arrested for protesting the invasion. Putin has banned publicly referring to the war against Ukraine as a “war.” The Russian government conscripts 260,000 young men into the military annually. These professional leaders refuse to look for any possible social-structure causes of Russian national chauvinism.

The Ukrainian working class, the poorest working class in Europe, is asked to trust both the Ukrainian bourgeoisie and the NATO powers. On March 20, Zelenskyy banned 11 political parties on accusations of sympathizing with Russia. Zelenskyy’s Servant of the People party, founded in 2018 and named after the TV show in which he played a fictional president, holds 57 percent of parliamentary seats, 67 percent with its allies, including oligarch Ihor Kolomoyskyi’s For the Future party. The second largest parliamentary party, with 37 of 421 seats, the Opposition Platform — For Life, which advocated alignment with Russia, was one of those banned on March 20. It had recently removed Viktor Medvedchuk, an oligarch, former USSR government lawyer, and personal friend of Putin, as its co-chairman, expelled MP Illia Kyva for welcoming the Russian invasion, and declared support for the Ukrainian war effort.

The crude UFA and Molodist statements about the general Russian population echo propaganda which the Ukrainian government has directed at the Russian people. The Ministry of Internal Affairs started a website, 200rf.com, for Russian families to find out if their sons were captured or killed. Its name refers to “Cargo 200,” a Soviet phrase for bringing home military coffins. Many Russian soldiers have allegedly tried to avoid combat. But the Ukrainian defense minister’s appeal to them was ineffectual bribery: “We guarantee you a full amnesty and 5 million rubles if you lay down your arms. For those who continue to behave like an occupier, there will be no mercy.” Evidently the Ukrainian government considers encouraging sedition among Russian troops or workers in Russia on the basis of authentic motives both pointless and undesirable.

Ukrainian and Russian workers and soldiers must find ways to offer and appeal for each other’s sympathy. Russian war crimes are being exposed in Mariupol and Bucha. While Russian forces may be driven back from Kyiv, no one knows how many months or years this war will continue. We want large groups of Russian soldiers to turn against the war and their officers. Working-class Ukrainians should use every possible means to communicate with Russian soldiers against nationalism — starting with the invasion, but without binding themselves to nationalist myths.

This would not betray Ukrainian independence. Ukrainians have the right to physically resist occupation. But undermining the willingness of Russian soldiers to fight this war, and mobilizing the Ukrainian working class as a class, politically, would be huge blows against Russia’s aggression. The Zelenskyy government says a struggle for the minds of the Russian conscripts is impossible. That is false. They do not want to base anything on rebellion, even on the enemy side, because of what it would demonstrate.

Even during the Vietnam War, eventually, large numbers of U.S. soldiers avoided combat, held anti-war meetings and demonstrations, or killed their own officers. Marina Ovsyannikova, an employee of Russia’s Channel 1, ran onto the news broadcasting set in mid-March to display a sign saying, “No war, stop the war, don’t believe the propaganda, they are lying to you here.” Numerous Belarus rail workers have risked their lives to sabotage signals and switches on railways carrying fuel and supplies to the Russian army north of Kyiv.

Internationalism does not mean ignoring aggression against Ukraine. It means propaganda and fraternization, assuming that regular workers, soldiers, and citizens are oftentimes unwilling, or ignorant, participants in their rulers’ wars.

It means graffiti, anonymous leaflets, symbols, and shouting if that is all that is possible now; meetings and demonstrations whenever they are possible, to ask Russian soldiers, “Why do you shoot? This is not your war!” Attempts to kindle rejection of the war among Russian troops would involve political organizing and radicalization among the Ukrainian working class.

The dull politics of bourgeois nationalism on the Ukrainian side does not threaten Russian discipline. On the contrary, it makes it easier for the Russian state to keep its soldiers in Ukraine and its population at home in line. Visible working-class Ukrainian appeals for international solidarity would much more effectively embarrass Putin and encourage Russian discontent to turn into anti-government resistance.

If we wish to see a “treasonous” response from Russian soldiers and workers, the fertilizer for that is for Westerners and Ukrainians to show visible sympathy across the line for the Russian working class, ignoring none of the facts about Russia’s aggression but fighting it by reaching across the borders. For Westerners, this includes opposing the sanctions to destroy the Russian economy, the big increases in U.S. and western European military funding, and the more than 100,000 U.S. troops in Europe.

Russian generals, go back to Moscow! Russian soldiers, Ukrainians are not your enemies! Russian workers, your bosses are the same as the bosses in Ukraine and in the wealthy, imperialist West: capitalist thieves. We are not against the Russian people! Resist the war!