Last month Berliners voted overwhelmingly to expropriate big landlords in their city. Now the incoming government is trying to squash that decision by subjecting it to months of “expert analysis.” 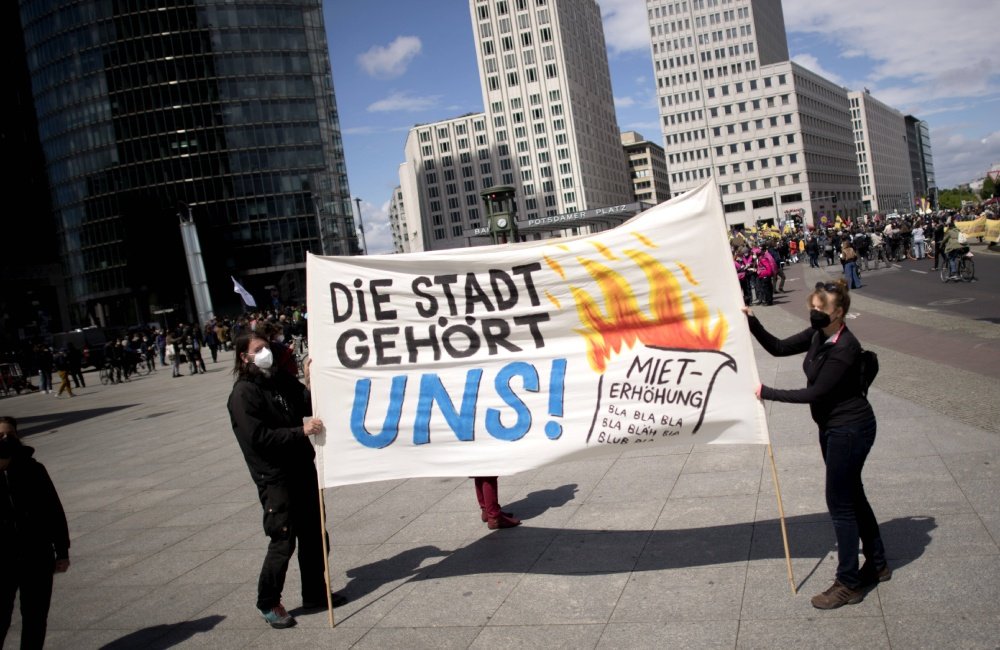 “If you don’t know what to do, then found a working group!”*

This is an old saying from the bowels of German bureaucracy. If a politician is told to implement a policy they don’t like, rather than openly refusing, they will announce that they are forming an expert commission to study the problem. After a year of excruciating deliberations, so they calculate, people will be too exhausted to keep pushing for the original policy.

And good news, everyone! Berlin is getting an expert commission!

Berlin’s new government will be the same as the old one: a “red-red-green” coalition of SPD, Greens, and DIE LINKE.

A month ago, 59.1% of Berliners voted that the new Senat should take all necessary steps to expropriate big landlords. (Many reporters, including me, wrote that 56.4% were in favour — but that is the percentage of total votes. If we only look at valid ballots, then 59.1% were for “Ja,” and that is how election results are always reported.)

This new government has made no secret of its opposition to the policy Berliners want. The SPD’s lead candidate Franziska Giffey, who will also be Berlin’s new mayor, was unequivocally opposed to expropriation. The SPD has always been the parliamentary arm of the Baumafia (construction mafia). Bettina Jarasch from the Greens said she would only use expropriation as an “ultima ratio.” The Green Party similarly gets money from realty speculators.

1,035,950 people were in favour of Deutsche Wohnen enteignen — and it would have been far more if everyone in Berlin was allowed to vote. Less than a million voted for Berlin’s three governing parties. These parties are too cowardly to say they will refuse to implement the majority’s will. Instead, they want to “study” the problem for a year.

What, exactly, is there to study? Numerous independent legal experts have analysed whether Article 15 of Germany’s Basic Law can be used to transfer housing into public property. The unanimous answer of everyone who is not a lobbyist for realty speculators is: of course you can. You can check for yourself — the constitution couldn’t be much clearer.

Of the new coalition, only DIE LINKE was in favour of the expropriation campaign — but these “government socialists” were willing to go along with the SPD-Green sham in order to hold on to their well-paid ministerial posts. At their recent party congress, Left Party delegates explicitly rejected a proposal to put the implementation of the referendum into the coalition contract. This is nothing new for DIE LINKE, unfortunately. They go along with just about everything: privatisation of the S-Bahn, maintaining precarious working conditions in public hospitals, and endless evictions of left-wing projects — more or less the exact opposite of the party’s official program.

You don’t need to take my word for it, either. DIE LINKE’s youth organisation in Berlin just decided they will oppose their party’s new government.

Last week, the old and new red-red-green government gave a taste of their housing policy. 2,000 cops from across Germany were sent in to evict 50 people from their homes at the Köpi-Platz caravan park. The police had helicopters and multiple tanks — why do police need tanks?

As Ex Berliner reported right before the eviction, this operation was to make room for a notorious realty speculator. As far as anyone can tell, the court documents contained fake signatures from the official CEO of the shell company that is supposed to own the land. That straw man never appeared in court — it’s not clear if he’s even a living human being. Yet a court was happy to throw people out of their homes so speculators could grab another slice of the city.

This speculator is known for refusing to pay contractors, and also owes millions of euros in unpaid taxes. Yet a few right-wing edgelords in our comments section said this was about “law and order.” They seem to think that their tax money should go towards subsidising criminal behaviour. I’m not saying that all actors in the realty industry are criminals. I’m just saying that I have not yet encountered any “developers” who are not more or less connected to the mafia.

For weeks now, activists of Deutsche Wohnen enteignen have been protesting in front of the meetings to form a new government. Red-red-green is hoping to wait out the campaign. But it’s not clear that 59% of voters in the city will forget what they just voted for, even if they have to wait a year.